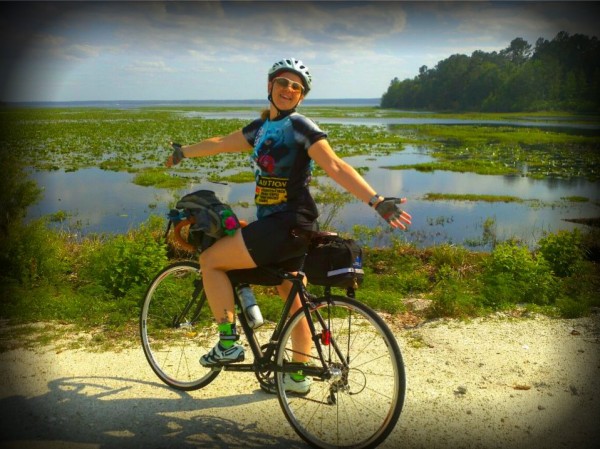 Once upon a time (all good stories begin with once upon a time) there was a bicycle gang; its members were from all over Florida. They were an unlikely crew who would gather together once a month and ride their bicycles together for hundreds of miles, come hell or high water. Nothing could stop them; neither floods, rains, sweltering heat or freezing cold. They would lube their butts and their bicycle chains, wax their frames and tighten their cleats. Headlights would be mounted and blinkies would be turned to the precise ninety degree angle they needed to be seen by raging roadsters in their automobiles.

These hard men and women would meet before sunlight for thick, dark roasted black coffee and steel cut oats; the breakfast of cycling heroes everywhere. Then after filling their hydration packs with icy cold water and endurance tablets, loading their pockets with Honey Glazed Bicycle Bars (a combination or seeds and nuts) and some tortillas filled with hazel nut spread and peanut butter and a few energy gel packs, they would break out their leather gloves and reflective vests, don their helmets and prime their mirrors to head out into the dark sometimes foggy mornings for their self-supported endurance rambling full of camaraderie and check points.

On one early October tour, the gang of Randonneurs headed out with intentions of  exploring scenic old Florida towns and rural areas of central Florida by way of Deland, Seveille and Matiland when a storm hit; Tropical Storm Philippe.

Philippe brought thunderstorms over most of the Florida peninsula and the Florida Keys, relentlessly pounding away at these long distance cyclists along their path, but they kept pushing on into the cold headwinds and through the deep salty puddles of rain rain water. They endured waves of blinding, gritty spray of water from passing trucks and cars alike.

All these riders in the storm could see was each other’s lights in the mist. The wind blew the rain so hard that communication was by hand signals, grunts and nods; what one was saying was up to interpretation. They were feeling hardcore; giving up was not an option, but a hot cup of coffee would have been welcomed.

They reached their half way check point and went in search of a water repellent superman cape for one of the hard core men. This was his first tour and he wore only one layer of pristine white spandex but he was so tough that in an average rain storm he would deflect road grime and grit would never get in his teeth. However, THIS storm had almost broken him with sandy grit in his teeth and the threat of making his nipples bleed from the sting of the wet cold.
The Randonneurs found themselves screaming down a hill at an incredible speed of 28.2 mph with the wind and rain whipping at their faces only to discover that the descent would abruptly end at a stop sign at the bottom of the hill, from which they would immediately begin a long climb up a 7% grade.

There were people in cars at every corner with their wipers banging. With the wind still burning their ears, the Randonneurs had their chance…the light turned green. They started forward only to have the hardest man of them all, the one with the mustache that made him look like Burt Reynolds, discover he was in the wrong gear!

They were all rolling through the intersection at a steady pace, one just a little slower than the others. As they picked up speed and charged forward he announced  again, &quot;Wrong gear, wrong gear!&quot;

Drivers looked on in amazement, or possibly amusement. Either way, our intrepid cyclists abandoned their search for the water repellent superman cape as they realized there would be no nipple bleeding that day because there was a place with a hot cup of coffee not far ahead ? a smelly little convenient store ? down the road.

Even now, whenever this wild group of hardcore hard men and women ride; especially in the rain, one can hear their laughing battle cries for miles around, &quot;Wrong Gear, Randonneur!? And so it was, from that day forward they are known as the Wrong Gear Randonneurs; where men were men and women were to!