Third in a series.

They’re so safe that the conflict rates between bikes and motor vehicles are too small to fit on tables — there are too many decimal places. When the first academic study of U.S. protected lanes came out this week, researchers had to concoct a special index rating that was 1,000 times larger than the actual conflict rate, just so they wouldn’t have to keep track of so many zeroes.

Protected lane intersections are so safe that when you point video cameras at them for 168 hours and make a chart of what happened to every single bike that entered them, it looks like this:

The blue sliver does not represent actual injuries. There were zero. It represents what researchers call “minor conflicts.” Out of 12,587 bikes and almost 20,000 cars, there were six.

In contrast to a similar study of colored bike boxes, the low-cost solutions some cities have used to reduce right-turn conflicts at stop lights, this study of 10 protected lane intersections released Monday observed zero major conflicts, the sort that involve rapid brakes or swerves by bikes or cars.

Why do they work so well?Jennifer Dill, a co-author of the new study from Portland State University’s National Institute for Transportation and Communities, said one of the most important reasons is simple: they’re busy.

“For the most part, the speeds are relatively low, particularly when the volumes are high,” Dill said. “There’s a lot of negotiating for space going on.”

As we wrote yesterday, these intersections aren’t just busy with cars. They’re also busy with bikes. And that’s because the protected lanes are more than just statistically safe. They’re comfortable.

Almost everyone who sees protected lanes agrees that they are safer 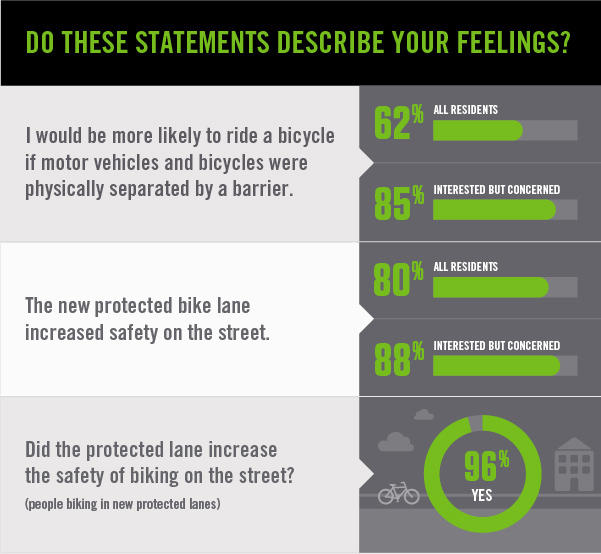 That’s another key finding from this week’s study, which surveyed 1,111 users of eight protected lanes in five cities around the country and 2,301 people who live near them.

Among people whose most important reason for not using a bicycle for transportation is that they feel uncomfortable on the streets — a vast swath of city-dwelling Americans that Portland Bicycle Cooordinator Roger Geller dubbed the “interested but concerned” in a famous 2006 white paper — there’s been scientific evidence for a few years that painted bike lanes make them feel slightly more comfortable. As cities across the country have followed Portland’s lead by striping major streets with bike lanes, the science has been verified on both counts: the share of urban bike commuters has risen just about everywhere … slightly.

Fully 96 percent of people surveyed while riding in protected bike lanes said the plastic posts or parked-car barriers increased the safety of biking in the street. In fact, so did 80 percent of nearby residents, whether they ride a bicycle or not.

Among nearby residents identified as “interested but concerned” — that is, people who either currently bike for transportation but feel uncomfortable riding in painted bike lanes on major streets, or who want to bike more despite feeling uncomfortable in painted bike lanes — the feeling of increased safety was particularly strong: 88 percent of those people said the protected lanes were safer.

People seem to be just fine with buffers and plastic posts

Separation barriers don’t need to be fancy to get the job done.

These projects drew overwhelming safety and comfort ratings even though many stretches of the protected lanes studied used nothing except flexible plastic posts to separate bikes and cars. In fact, when asked to rate their comfort levels from 1 to 6, users of protected lanes actually said they felt more comfortable with plastic posts than they did with parked cars or even a raised concrete curb:

But the lack of any significant conflicts among 12,000 bikes observed, combined with the fact that 96 percent of people who are actually using the lanes report them to be safer, should nail the coffin of any suggestion that because they sometimes require cars to turn in front of bikes, protected lanes are inherently unsafe. They’re not.