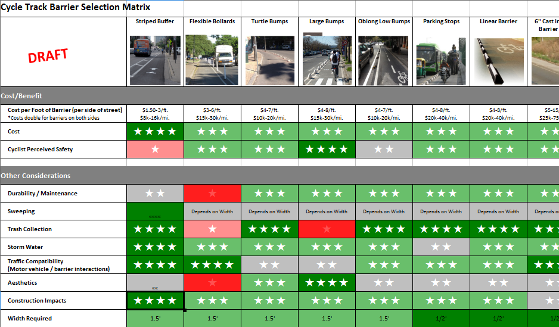 Click image to download the file, or try accessing it via Google Drive or Dropbox. Here’s a prettier but slightly less informative version.

Posts, curbs, flower beds, parked cars, armadillos, parking stops &em; there are so many beautiful ways to separate bike and auto traffic. But which is best?

It depends on the street, of course. Which is why we’re so excited about a recent exercise by Austin engineer Nathan Wilkes.

Wilkes has rated 15 different sorts of bike lane barriers on a color-coded scale of 0 to 4 stars to create a “cycle track barrier selection matrix” (Excel file via Google Drive) that roughly captures the ups, downs and costs of just about every method currently being used in North American cities.

Each barrier type received a rating based on its cost, perceived safety, durability, traffic compatibility, aesthetics, construction impacts and the ease of sweeping, trash collection and stormwater friendliness.

He also worked out the rough cost of installing several of the categories, ranging from $19,152 per mile for flexible bollard posts to $17.6 million per mile to rebuild the street with a raised sidewalk-style track for biking. 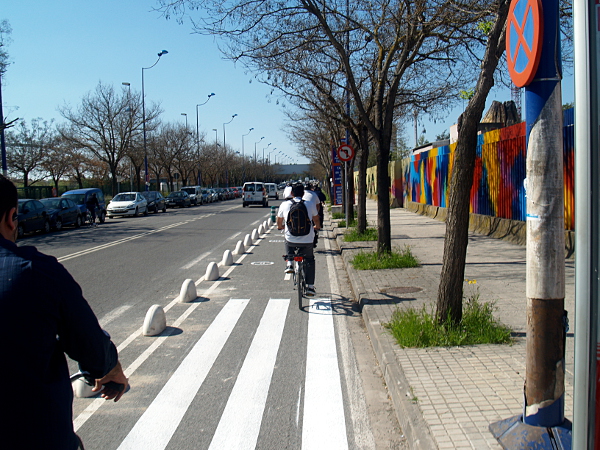 “For someone who has been thinking daily about these tradeoffs for several years, the content should be fairly intuitive and even common sense,” Wilkes writes in an email. “For someone who is for the first time grappling with the tradeoffs between barrier types, I thought it would be a good tool and framework to get off to a good start, understanding that there is a lot of nuance beyond the 4 star rating.”

One nuance: Safety. Two recent studies from Canadian cities show that modern, well-marked protected bike lanes substantially reduce crash rates, and the Federal Highway Administration is now preparing its own analysis, too. Meanwhile, the two countries that use protected bike lanes most, Denmark and the Netherlands, are the world’s safest countries to bike in, in large part because biking is so convenient, comfortable and therefore popular in Dutch and Danish cities.

That said, there’s no rigorous research comparing the different barrier types to one another. So Wilkes instead rated perceived safety, the sense by users that cars and trucks are not bearing down on them.

Wilkes has been tweaking his first draft of the matrix for months. (You can download it from Google Drive or Dropbox.) Here on the Green Lane Proejct team, we’re sketching up a simplified version to share with non-engineers. Got any advice? Drop a thought in the comments below and we’ll see that Wilkes gets it.

Update: Here’s the simplified but prettier version to share with non-engineers.

The Green Lane Project is a PeopleForBikes program that helps U.S. cities build better bike lanes to create low-stress streets. You can follow us on Twitter or Facebook or sign up for our weekly news digest about protected bike lanes. Story tip? Write [email protected] Wilkes photo by City of Austin Public Works.