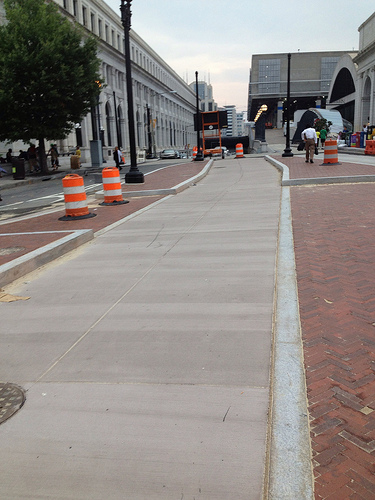 In the middle of May, the District Department of Transportation (DDOT) began reconstruction work on 1st Street NE between G
Street and New York Avenue.  In addition to a new cycletrack on the east side of the road, the reconstruction will include a new roadway, upgraded underground infrastructure,  rain gardens and other stormwater catch basins, new streetlights, realigned sidewalks, new traffic signals, larger tree boxes, new granite curbs, storm drains and brick gutters. These repairs and improvements should be completed by the end of February 2014.

It’s not just DC cyclists who are excited about this either. Local businesses, as represented by the neighborhood Business Improvement District, are excited too. ?First Street will be fabulous when the project is completed, and we are excited about the great new green spaces and cycling amenities that are included,? said NoMa BID President Robin-Eve Jasper. More and more, DC businesses are learning that bikes mean business.

The second phase of this project, to be started later, will extend the cycletrack south to Columbus Circle. There it will connect to a small section of cycletrack, seen above, completed in May of 2013 as part of the Columbus Plaza Rehabilitation Project in front of the Union Station rail station. This is also the location of DC’s bike station.

The new section between G and Columbus Circle (seen below) will feature a bi-directional, buffered cycletrack along a one-way street. The cycle-track will literally be green, using a green, non-textured asphalt pavement coating.

Once completed, the 1st Street cycletrack will create a bikeway on NoMa’s main street that connects the neighborhood, the Metropolitan Branch Trail, Union Station and Massachusetts Avenue.