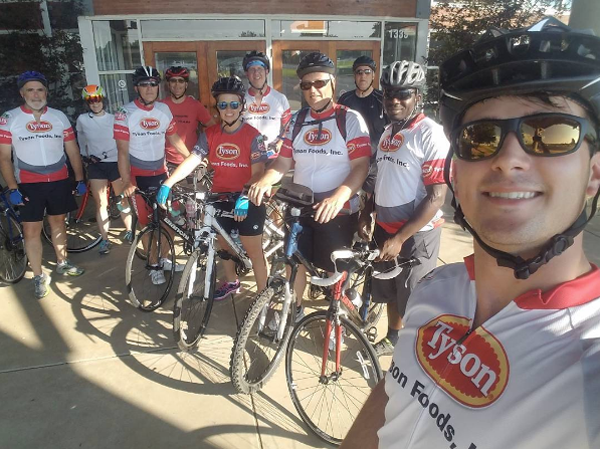 Big ideas sometimes start small. On one of his frequent rides along Northwest Arkansas’ Razorback Greenway, Worth Sparkman, public relations manager for Tyson Foods, noticed that there were more people out on the trail. The 36-mile route no doubt attracted a lot of Sparkman’s colleagues from Tyson, headquartered in Springdale along its southern section. “Our location is so tied to this greenway, I thought, wouldn’t it be wonderful if we could encourage even more people to get out and bike, run or walk more?” Sparkman says.

That nugget of an idea morphed into Miles that Matter. The program, launched in late June, promotes wellness by encouraging the 9,000 Tyson employees who work near the greenway to use it on foot or by bike. For every mile of participation, Tyson donates a pound of protein to hunger relief programs, up to 50,000 pounds. About thirty Tyson employees act as volunteer meetup leaders who take responsibility for logging miles for each meetup. Team shirts make them a visible a presence on the trail.

“With every mile, they are giving back to the community.” And that’s part of what makes the program work, Sparkman says. “People tell me, “that’s what gets me off the couch, because my miles are going toward the tally, I can do two or three’.”

During one Miles that Matter ride, a Tyson employee showed up with a new bike. He explained to Sparkman that he’d been sitting on the fence about getting a bicycle. When he saw news of the program launch, he bought the bike. The meetup was his second ride ever. “Last time I saw him, he was up to 125 miles,” Sparkman says.

When a Fortune 100 firm with a global workforce of more than 100,000 people encourages bicycling, it seems bound to trigger a ripple effect. Tyson hopes to roll out Miles that Matter to more of its 100 U.S. locations. There is a lot of excitement within the company for the program’s charitable angle and the enthusiasm it generates for riding. “We believe that bicycling is a viable mode of transportation and recreation,” Sparkman explains, “we just haven’t had a formal program to jump into. Until now.”