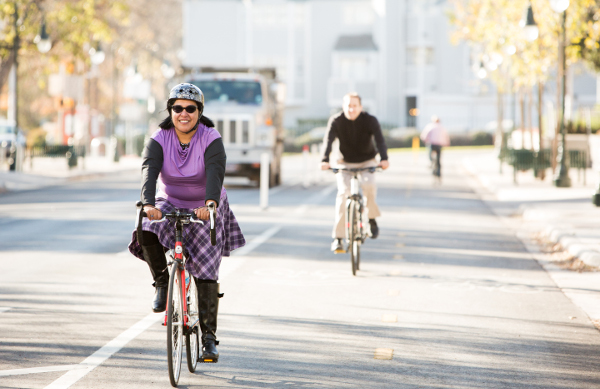 This is a guest post from our colleagues at BetterBikeShare.org.

While different bicycling initiatives often seem separate from the outside, upon closer look you can see important connections and crossovers.

The Better Bike Share Partnership, which includes PeopleForBikes, is an initiative of the JPB Foundation that seeks to make bike share accessible for all members of the community. Over nearly three years, we’ve taken big leaps in understanding what helps and hurts in getting bike share to be an equitable community resource.

The Big Jump, meanwhile, is an effort to double or triple biking in 10 particular neighborhoods around the country in the next three years, to help cities understand what works.

Many of the lessons bike share pros have learned recently are relevant to the Big Jump and other other efforts to boost biking. Put simply, equity matters to the success of any big jumps in bicycling.

If there’s one lesson that has stood out above all others in BBSP’s work to improve bike sharing, it is that relationships matter. As Martha Roskowski, Vice President of Local Innovation at PeopleForBikes, said, ?BBSP proved that success comes when institutions and agencies collaborate with community leaders and develop genuine relationships based on trust.? This was part of the reason The Big Jump required each applicant to propose a leadership team combining local government with other groups, such as community organizations and local foundations.

The other key element of relationship-building that BBSP has discovered is the importance of recognizing and partnering with existing community-based initiatives. Whether or not a local group is specifically focused on bicycling, partnerships can make a difference in the success of biking efforts.

Kyle Wagenschutz, Director of Local Innovation at PeopleForBikes and the Big Jump project manager, said this helped PeopleForBikes select its Big Jump focus areas. ?We didn’t pick places where there wasn’t already some cooperation between cities and organizations,” he said. “We looked at places where bikes are playing an integral role in change, but where they’re not the only factor.?

This type of approach is important when it comes to working in communities with a history of disinvestment, where locals may not trust urban planning initiatives. For instance, to some people, bicycling infrastructure symbolizes gentrification and related cost-of-living increases. Working through existing partnerships at the local level can help make sure that such community concerns are both respected and meaningfully addressed. 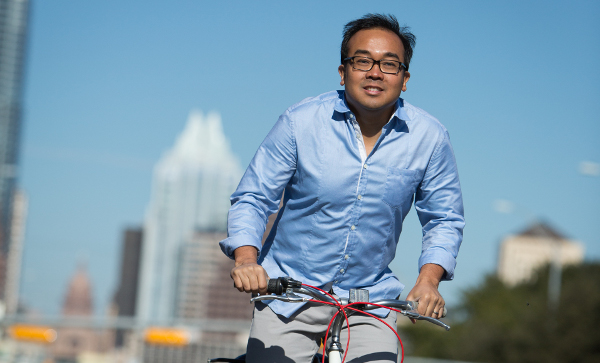 Through the years, BBSP has paid attention to conversations about bicycling barriers and motivators among low-income populations and people of color. Fortunately, some of the factors we’ve identified are those that The Big Jump is uniquely poised to address.

Emerging research by Charles Brown and James Sinclair at Rutgers University points to another kind of barrier as well, showing that fear of racial profiling and of being a crime target is a big obstacle to bicycling among blacks and Latinos. (Stay tuned to BBSP’s blog for a series going deeper into their findings.) Hopefully, the leadership team model that The Big Jump is moving forward with will help address social concerns such as these as well.

So what does draw people to biking? There is now strong agreement among bike sharing experts that social networks may be just as important as physical ones in getting people out on bikes. And we’ve seen the way that bicycle riding can act as both a utilitarian tool and a fun diversion to try out with friends and family.

The Big Jump is paying attention, explained Wagenschutz. ?Everything that we learn in terms of communications and community outreach, and of the ways we’re sensitive to cultural contexts of places — all of those learnings are immediately transferable to how to we develop bike infrastructure and encourage programs that get people on bikes.?

A variety of approaches

At the end of the day, one of the most important things to remember is that every city and neighborhood is different. As such, each place will require a slightly different approach. This principle has a chance to play out pretty clearly through The Big Jump, given that the initiative is focusing on 10 different geographic locations.

?We’re going to be building action plans with the community,? said Wagenschutz. ?We’re not going to be prescribing how that takes place, we’re leaving that up to the ways in which the community thinks it’s best.?

However, The Big Jump team recognizes that there’ll be some similarities between approaches to broaden cycling accessibility. For instance, making materials available in multiple languages will be a priority, as well as ensuring that marketing materials include images of people of color. Another strategy that could be used among The Big Jump cities is encouraging sub-grants to smaller community organizations or community leaders.

While there is always more to learn, The Big Jump team is looking to what has come before them in order to more meaningfully incorporate the people that new bicycle infrastructure may affect. And BBSP is happy to be a part of the process.

The Better Bike Share Partnership is a JPB Foundation-funded collaboration between the City of Philadelphia, the Bicycle Coalition of Greater Philadelphia, the National Association of City Transportation Officials (NACTO) and the PeopleForBikes Foundation to build equitable and replicable bike share systems. Follow us on Facebook, Twitter and Instagram or sign up for our weekly newsletter. Story tip? Write [email protected].