Stoplights made for cars are leaving countless bikers stuck on red 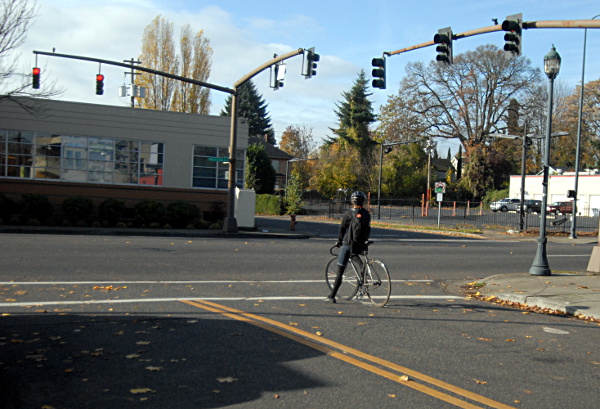 The American system that forces bikes to steer into the middle of many intersections to trigger green lights is baffling even to most current bikers, a new study finds.

The process of getting a green light is even more mysterious to people who don’t currently bike, research suggests.

In video observations of 688 bikers, between 53 and 84 percent of bikes at three signalized intersections failed to stop over the in-street detector loop — let alone the part of the loop that might actually trigger a green light.

In a related survey, 23 percent of riders said they would wait for a red light by standing right at the curb. Of those riders, 96 percent said they did so for “safety/visibility” or to “stay out of the way of traffic.”

The result: travel delays, frustration and a sense, right or wrong, that bikes are incompatible with U.S. streets.

For urban design experts, it’s a troubling reminder of how ineffective auto-oriented infrastructure is at serving people on bikes.

Markings help, but not much 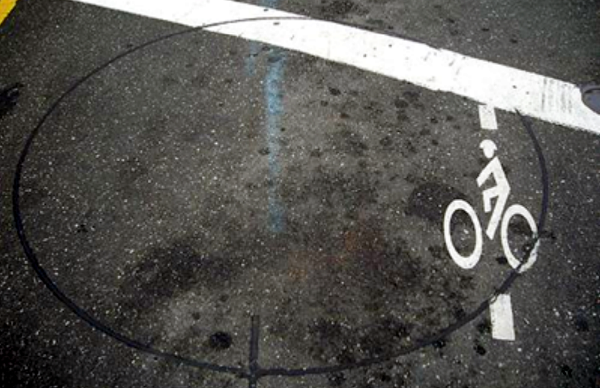 Portland, where the surveys and observations were taken, is one of many cities that try to make the signal detection system more legible by adding bike-shaped stencils to the detection loops.

Those stencils help. But not a lot.

In Bussey’s surveys, almost all of which were taken by people who already ride their bike once a week or more, 55 percent of respondents didn’t know the meaning of the MUTCD-approved stencil.

That finding echoes a study last year of 68 residents of Tallahassee. Not a single person correctly identified the meaning of the bike stencil.

Bussey and his advisor, PSU engineering professor Chris Monsere, tried to track down the history of the little-understood stencil, but couldn’t find its origin or any documentation supporting the idea that it would work.

“Typically, if something is implemented in MUTCD, there is going to be something out there that would explain why they thought it was a good idea,” Bussey said. “If half of drivers didn’t understand a sign, we probably wouldn’t use it.”

There’s no such documentation for the stencil, first recommended by AASHTO in 1999 and included in the MUTCD in 2003.

Bussey tested two ways to make the markings more clear: adding an explanatory sign at the side of the road and adding green pavement marking behind the stencil. Though both seemed to help, even the green-backed stencil was failing to lure more than 60 percent of bikers to the detector loop.

Where dedicated bike lanes are available, Bussey noted, it’s much easier to place a detector in a spot that bikes will naturally trigger a green — just as cars naturally trigger the large detectors near the middle of intersections.

Peter Koonce, a coauthor of the study and the traffic signal division manager for the Portland Bureau of Transportation, said he’s experimenting with microwave, thermal and video detectors to sense when signals should change to let bikes through.

“Is it good for all users? Does everybody feel comfortable?” Koonce asked last week. “The answer to that probably is no.”

Correction: A previous version of this story incorrectly described Bussey’s student status. He is working on a second undergraduate degree but is not a grad student.