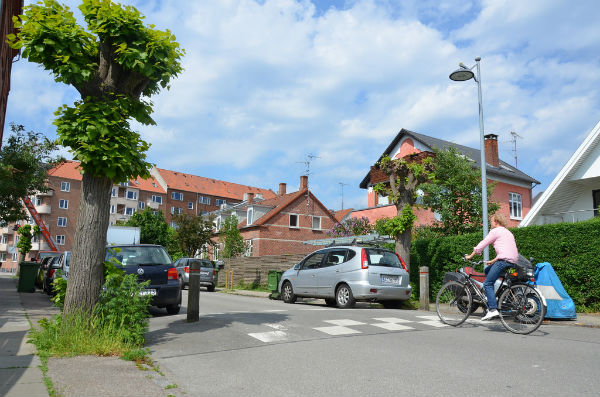 The data show exactly the opposite — and also suggest that putting bikeways only on side streets might actually be the worst course of action.

On Monday, Canada’s national Globe and Mail newspaper offered the latest installment of this understandable but misguided narrative. It’s part of a series about projects “that aren’t often talked about because they actually work.”

The idea is that the bike boulevards of Vancouver are uncontroversial, and therefore good:

And yet, he is a fan of the more understated network of traffic-calmed residential streets that allow cyclists to traverse the city in relative safety and peace. …

Urban-planning and transportation experts have long feted Vancouver’s extensive system of bike-friendly side streets as a cheap and uncontroversial way for bike-resistant North American cities to create the infrastructure that gets people out of their cars and onto two wheels. 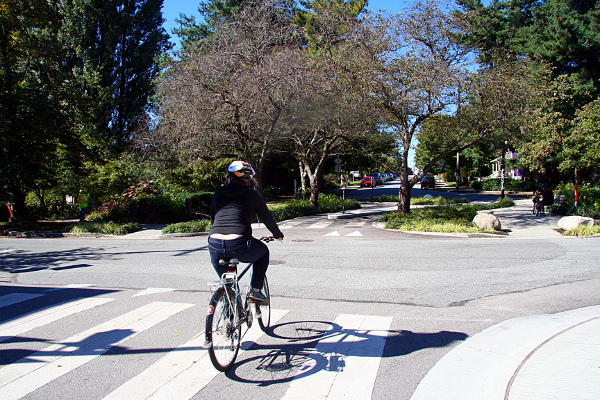 What isn’t true is that bike boulevards (also known in various cities as “neighborhood greenways,” “neighborhood bikeways” and even “neighborways”) function as a good alternative to protected bike lanes. 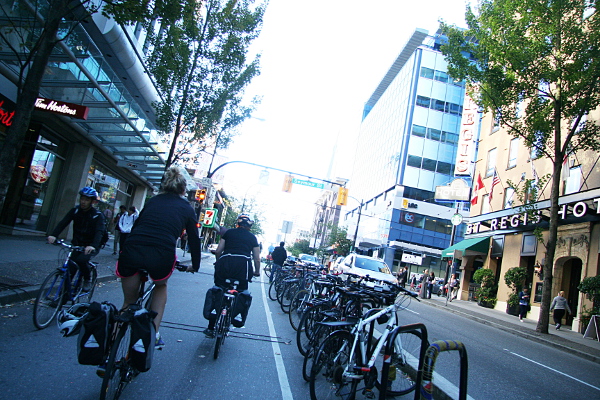 When the Adanac bikeway enters downtown Vancouver, it becomes the Dunsmuir protected bike lane. Installed in 2010.

In fact, Vancouver’s recent experience tells the opposite story. In the 1990s and 2000s, the city built a network of bike boulevards and biking gradually edged upwards, reaching four percent bike commuting by 2011.

Then the city shifted toward building protected bike lanes to go with them … and bike commuting more than doubled in four years, rapidly turning Vancouver into the bikingest large city on the continent.

The truth is that protected bike lanes and bike boulevards are complements. As the Dutch have been proving for decades, they work far better in combination.

How much better? Let’s spin the globe to Auckland, New Zealand, where a 2014 academic study put some numbers on this question. Using available estimates of the ridership changes that result from various types of bikeways, a team of researchers simulated four scenarios for the future of Aukland: one with a network of mostly conventional striped bike lanes; one that put protected bike lanes on arterial streets; one that retrofitted all local streets into “self-explaining roads” (essentially, bike boulevards where bikes and cars can safely share the lane) and one that combined protected bike lanes with bike boulevards. 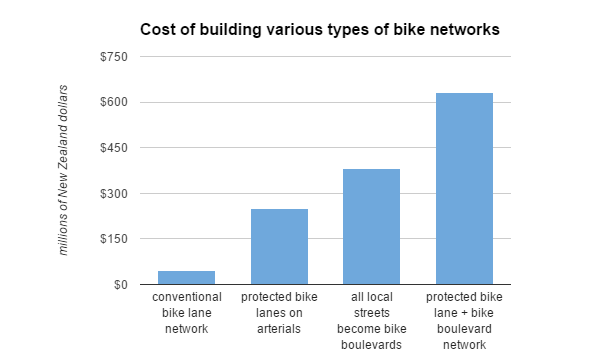 They concluded that a network entirely of bike boulevards would increase biking — but only to about five percent of trips, about the same as conventional bike lanes.

A network of protected bike lanes would do better, moving biking to something like 20 percent of trips. 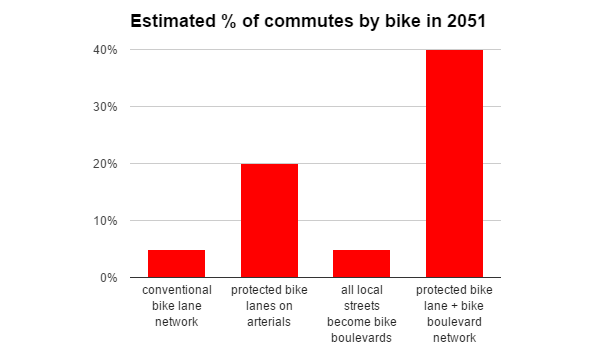 And when 40 percent of trips in your city happen by bike, you start saving a huge amount of money from reduced fatality rates, hospitalizations, fuel costs and air pollution. (Here’s the full list.) Those cost savings more than offset the cost of the infrastructure: 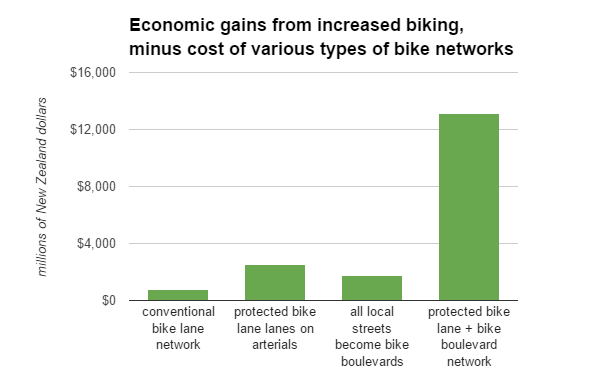 Which means that if you look at the true economics of bikeways, the best option for saving money is to build an all-ages biking network on both small and large streets:

There are a lot of assumptions embedded in these figures, and different researchers would doubtlessly tally things differently. But the fact is that we already know what cities with 40 percent biking look like — and they have protected bike lanes on big streets and traffic calming on side streets.

Do bike boulevards “work,” as the Globe and Mail puts it?

They work to multiply the power of your protected bike lanes.