Shared space: Why the best thing for some streets is a little bit of chaos

Imagine yourself in a small town enjoying a coffee next to what looks like a public square. Except there are no curbs, no sidewalks, no traffic lights, no striping, not even a stop sign.

All the same, cyclists, parents with baby carriages, buses and cars — yes, cars — are going about their business guided by the same human courtesy that allows us to form lines and wait our turn at the grocery store checkout.

In the Netherlands, we call this approach to low-stress public space “shared space.”

Before you dismiss the concept as a utopian ideal, take a look at the video below from Leeuwarden, the Netherlands. It shows what can happen when the usual traffic devices are removed, as I described above. Dutch examples abound but this approach is also working in places with emerging cycling cultures like Exhibition Road in London, UK, or Opernplatz in Duisburg, Germany.

At Duisburg’s Opernplatz, cars travel the square at a slow pace, while pedestrians walk the full space, from Opera building to city park:

This former through route circling the inner city of the frysian town of Sneek, The Netherlands, has been transformed to a series of attractive mixed use quays:

In the United States, Pittsburgh redesigned its historic Market Square in 2010 around European shared-space principles, and it’s working beautifully: 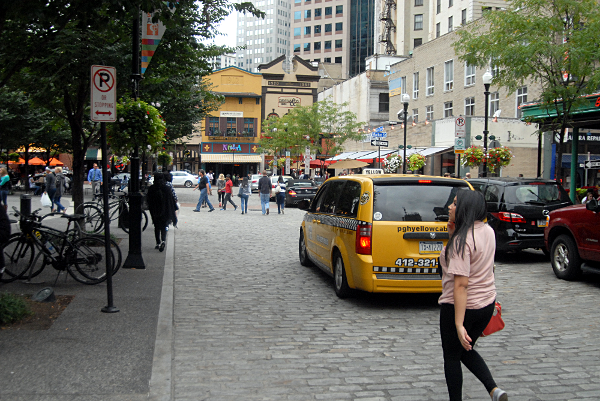 Without clear sidewalks and streets, people are less certain. Here’s the basic principle so many Americans fail to understand: uncertainty can be a good thing.

Moving across these streets is not a matter of blind obedience to lights and signs. As a result, traffic slows down and people look more carefully. Eye contract is possible. Decisions are based on what is happening. The street’s design guides people in their behaviour and expectations and encourages them to think for themselves again.

The result is that traffic moves through urban space at an appropriately human pace that promotes accessibility for all users. A pace that is good for chatting with your neighbor and walking your dog, for flirting and daydreaming. At the same time, delivery, emergency and other vehicles can pass through without dominating the area and businesses flourish. Shared spaces complement private and public gathering spots: coffee shops, restaurants, parks, churches.

Shared space can be a great solution on streets that attract people — or would attract people, if they were better designed, such as downtown or neighborhood shopping streets. By making people directly responsible for the safety of their fellow citizens, shared space actually improves safety. Dutch research shows most locations retrofitted to shared space have lower travel speeds and fewer serious injuries.

This design in the medieval Dutch city of Naarden makes the most of a narrow street in an historical setting. Yellow paving stones keeps drivers in the centre of the road. Pedestrians take back the streets while cyclists and car drivers adjust their behavior. Photo: Dick van Veen.

Materials and design forms are fundamental in a shared space. For example, colored paving can guide the eye. A contrasting colored border can be used to narrow the street for drivers, which encourages slower driving. Drivers feel the texture of paving stones as they drive over, and the vibrations make them feel like they are going faster than they would feel driving on smooth asphalt.

Streets that feature trees and flowers, instead of traditional traffic control devices, makes users feel like they are in a neighborhood instead of a race car track. Landscaping items like statues or fountains not only create a sense of place, they also attract pedestrian activity and guide traffic around them. Old creeks and canals can be made visible again by removing the underground piping and bringing back narrow bridges.

Aspects like this make artificial traffic measures, like speed bumps or pinch points, unnecessary. At the same time, places can get back to their roots, by emphasizing the rivers and other natural features that encouraged people to settle on a particular spot in the first place.

So what does this mean for North America’s rapidly evolving bicycling culture? All the attention on protected bike lanes is certainly not wrong. Protected bike lanes are a great solution, especially on roads where there is a great difference between the speed and mass of cars and cyclists. Corridors that allow cyclists to travel safely from A to B are essential.

However, in certain places, shared space can be an even better solution than segregating modes, especially on streets where people want to linger because there are great shops and restaurants and museums. In these locations, safe cycle facilities would certainly help the traffic safety, but at the cost of having a great public space. Using the shared space concept, on the other hand, can actually provide an excellent cycling facility while also calming car traffic down to levels where the public can dominate. Mixing road users at a human pace means more people access and enliven the space.

It may surprise you that half the bike facilities in The Netherlands are not protected. We are often guided by the maxim, ?mix when you can and separate when you must.? In addition to protected bike lanes, we rely on traffic calming to safely mix motorized and nonmotorized traffic. In the average built-up part of Dutch cities, it is estimated that roughly 85 percent of all streets have speed limits of 20 mph (30 kilometers), and even lower in woonerfs or home zones.

At this shopping street in Dedemsvaart, The Netherlands, pedestrians and cyclists move from shop to shop, while car traffic slowly creeps along the street. Parking near shops stays possible while the human — non car – scale in the street is dominant. Photo: Dick van Veen.

Shared space works because people are more aware of what is going on around them, and act accordingly. Low speed limits are also essential, but North American cities working to integrate bikes and negate conflict over who owns the street should remember that social rules can sometimes be even more effective than traffic rules. Better cycling infrastructure should always go hand in hand with placemaking. Absolutely keep building protected bike lanes, but expand the tools at your disposal and consider shared space as a solution, too.

Dick van Veen is a Dutch architect and engineer at consultancy company Mobycon with experience retrofitting streets, developing Shared Space projects and designing bike facilities and parking. In addition to his work as a designer, Dick has visited North America on numerous occasions, designing complete streets and new bikeways and sharing his experience through teaching workshops on bike facility design and placemaking to planners and traffic engineers.