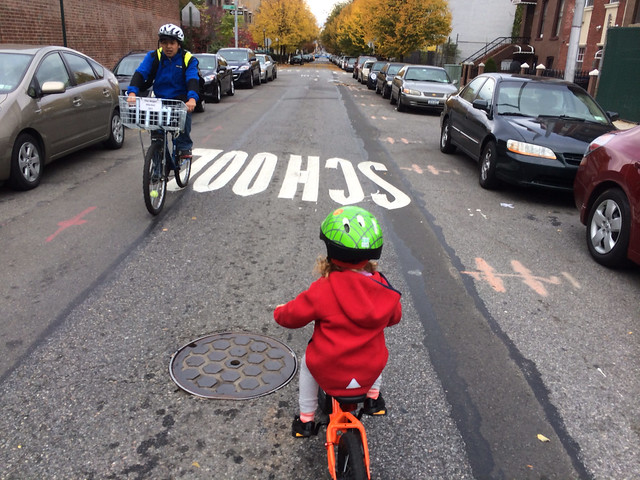 Second in a series about opinions held by the “swing voters” of bicycling.

To people who ride bikes in many U.S. cities, Portland and San Francisco might feel like heaven. But for the thousands of people in those cities who own bikes but don’t ride frequently, that’s far from the case.

Asked to rate the amount at which they were “concerned about safety when cycling in your city” on a scale of 1 to 5, three-quarters of such riders said they were either “very concerned” or “extremely concerned.”

The survey, taken in September and October 2013, followed a string of fatal collisions in San Francisco. Not surprisingly, concern was higher there: fully 80 percent of respondents answered “very” or “extremely.” But even in Portland, which hadn’t seen a single bike fatality in more than a year, 69 percent of respondents did so.

High though that number is — a 2011 poll of San Francisco voters in general found that 51 percent called biking in the city “unsafe” — it’s not a huge surprise. People who study biking in cities have argued for years that people who don’t frequently get around on bikes are disproportionately deterred by the notion that biking is unsafe.

About 60 percent of Portlanders “would like to ride more,” Portland bike planning coodinator Roger Geller estimated in 2005. “But they are afraid to ride.”

A 2012 academic study by Portland State University’s Jennifer Dill backed up Geller’s hypothesis by categorizing Portlanders according to their feelings about different kinds of street designs, then asking how much they feared auto collisions in general: 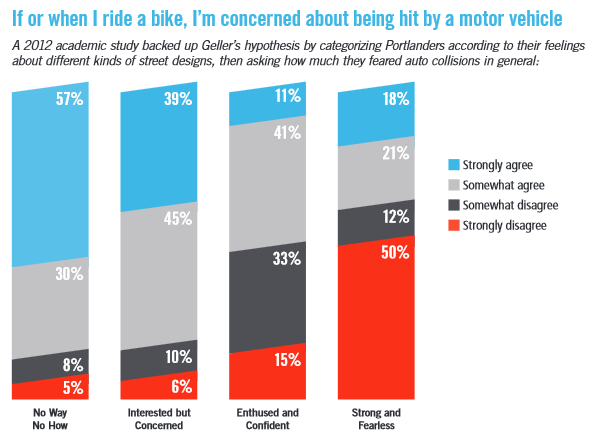 Leslie Carlson, a Portland communications consultant who often deals with bike-related messages, noted that these findings don’t show that biking in Portland and San Francisco is actually dangerous, but only that people think it is.

“The perception of safety is what we’re dealing with here,” Carlson said. “If we were all concerned about actual safety, we wouldn’t drive in cars. They’re not very safe at all. But we have a seat belt and we have steel and glass around us. It makes us feel safe.”

Carlson said she thinks the solution is to create “cues for people on bikes” on the street that “make them feel better about getting on their bike.”

Dill’s research suggests that at least one such cue, a physically separated bike lane, is disproportionately attractive to people who fear for their safety on the road: 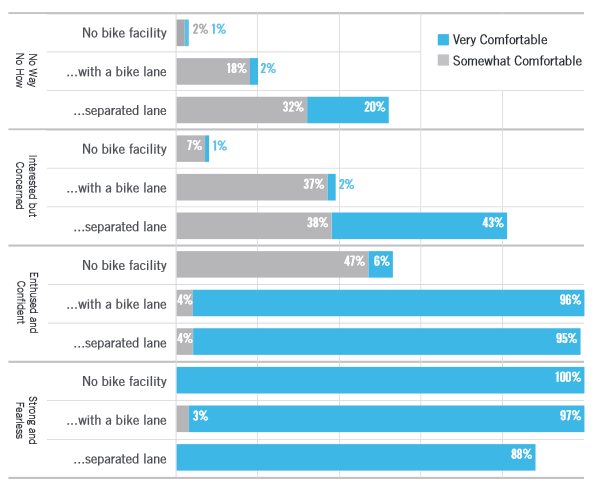 Tomorrow’s post will have new insights on this question. Stay tuned.

If you’d like, you can download the raw results of the survey and a full PDF report of our findings. The Green Lane Project writes about the ways cities are building better bike lanes. You can follow us on Twitter or Facebook, or sign up for weekly emails of our latest news here. Photo by Doug Gordon.