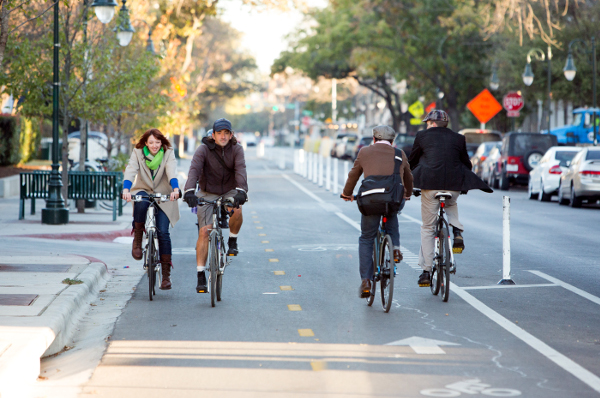 Fourth in a series about opinions held by the “swing voters” of bicycling.

So far in the last week, we’ve dug into a new survey suggesting that physically separated bike lanes are a solution to biking’s biggest recruitment problem, and that they can appeal emotionally even to those who rarely bike.

But what are we supposed to call them?

And here’s what ordinary people in San Francisco and Portland called them:

Were taking two lessons from this:

Jennifer Dill, a transportation planning professor at Portland State University and a leading scholar on bikeway design, said she’s recently decided not to use “cycle track” for general audiences.

“I’ve had a couple instances lately when people (not working in this field) think it means something like a velodrome, e.g a race track setting,” Dill wrote in an email.

“Protected bike lane” has downsides, too, she said. “I’m sure some people would quibble with the word ‘protected,’ e.g. how protected is it? Some extra paint and flex posts may not seem like protection.”

Then there’s the buffered bike lane. Gordon said he thinks these should be described as “separated” but not as “protected.”

Here at the Green Lane Project, we’ve thought about this issue a lot. And for on-street bikeways that are physically protected from auto traffic and separated from sidewalks, our style is to refer to these as “protected bike lanes.”

Though “cycle track” will probably remain the technical term for professionals, this survey and interviews with leaders around the country suggests an emerging national consensus around either “protected bike lane” or “separated bike lane” for most audiences.

David Vega-Barachowitz, who as director of the National Association of City Transportation Officials’ Designing Cities Initiative helps shape the professional terminology, sounded a similar note in an email last week. “We recommend the term ‘protected bike lanes’ because it is illustrative and can be easily grasped by those who like bike lanes, but want additional protection or separation from traffic,” he said.

This is just the beginning of the survey and focus group’s findings about language. Among the others:

Surprised by that last finding? Us too. Respondents’ complicated feelings about safety are the subject of our fifth and final post on this survey, publishing tomorrow.