Second in a series about local bike media.

In the capital city of the U.S. tech industry, it’s obvious that the blog is going the way of the web forum: it’s one more tool, but increasingly used only by the pros, while casual users stick with simpler platforms like Facebook and Instagram. Here’s a look at our favorite bike media right now in the city by the Bay, professional and amateur.

Daily news: Streetsblog SF
Maybe befitting its city’s spirit, the area’s leading bike news source has a harder edge of activism than some of its peers around the country. Also seen on Twitter and Facebook.

Advocacy news: SF Bicycle Coalition
One of the country’s top bike advocacy groups has an unusually news-oriented front page for its website, with links to Twitter and Facebook. For slower-churned news, there’s also Tube Times, the organization’s quarterly newsmagazine. 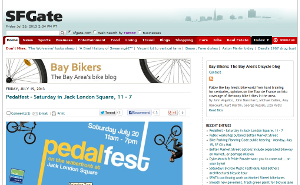 The San Francisco Chronicle implausibly self-identifies Bay Bikers as “The Bay Area’s Bike Blog,” but its detailed posts about SF bike infrastructure issues, mixed with civic issues and notable events, actually make it one of the city’s best news sources on the subject.

Bike fun: SF Critical Mass and San Francisco Bike Party
Two groups that lead monthly fun city rides coordinate largely through Facebook: the older one (and the granddaddy of the Critical Mass movement) with more politics and less centralization than the younger one.

Regular inspiration: Change Your Life. Ride a Bike.
A mix of photos, videos and newsy commentary on bikes, with regular guest posts.

Bike touring: The Flaming Bike Blog
Ginger Jui is based in Oakland, but the out-of-town treks she documents are relevant to anyone in the Bay Area.

The joy of riding: Plattyjo
Jenny Oh Hatfield mostly documents races and distance rides, dipping into transportational riding once in a while. See her Twitter, too.

Crosstown traffic: Do the Wiggle!
SF’s crosstown greenway has its own Twitter feed, and it’s unexpectedly thoughtful and newsy.

A touch of wonk: Stephen Zavestoski
Most of this USF professor’s tweets are bike-related, with a bent toward transportation equity.

Honorable mention: Niches and neighbors
Legendary mountain bike maker Gary Fisher lives in SF and often tweets about local bike life. LadyFleur mixes fashion and infrastructure in her Mountain View-based blog and tweetstream. The Silicon Valley Bicycle Coalition is a fast-growing advocacy group down south. If the secret to a great bike fun ride is a simple, appealing concept, the Cupcake Bike Ride has it figured out. And no list of great SF tweeters would be complete without the SF Horse Coalition, the Twitter feed that advocates for truly complete streets and pokes friendly fun around the active transportation world.

You can follow any of the Twitter users mentioned here, plus a few more, using our new curated list: SF bike tweeps. Red heels photo by Richard Masoner/Cycleicious.