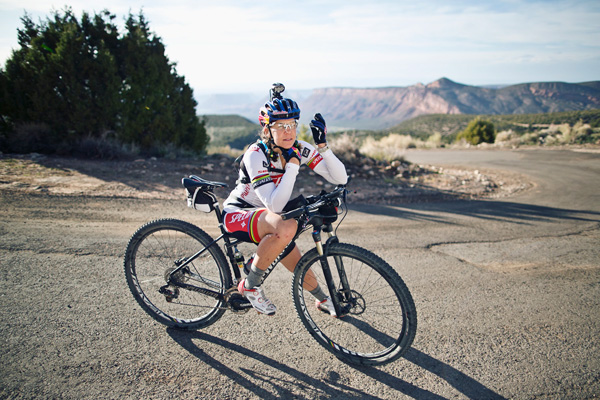 In her “spare” time, the Queen of Pain is also a volunteer firefighter, chairwoman of the International Mountain Bicycling Association’s honorary board, and PeopleForBikes supporter. When she’s not winning races and fighting fires, she’s doing what she loves most: spreading the simple love of riding bikes.

This year Rebecca Rusch is introducing a 100-mile dirt fondo gravel-grinder around her hometown, Sun Valley, Idaho. Rebecca’s Private Idaho will benefit PeopleForBikes, World Bicycle Relief, and the Wood River Bicycle Coalition. We caught up with Rebecca to chat about dislocated fingers, misperceptions of endurance racing, and more appropriate monikers for the Queen of Pain.

RR: It’s probably the scariest thing I’m going to do all year.

RR: It’s going to be a really great party-ride. I went out last fall and put in about 600 miles on my motorcycle looking for the right course and exploring. Doing those rides, I just thought, ‘People have to see this.’

[The event] is a pretty big undertaking and I think people will be blown away. We?ll roll out of town and then you won?t see another house or building for 80 of the 100 miles. Some people will go fast and some will go slow. There will be fully stocked aid stations and at the end we’re having a huge Idaho-style pig roast.

PFB: You have a laundry list of medals in everything from skiing to mountain biking. Is there any sport you’ve tried and been absolutely terrible at?

RR: Mountain biking! I was involved in adventure racing and I had to do it. But for 10 years of adventure racing, I abhorred mountain biking. I hated it. I was lousy at it. I’d throw my bike. I cried all the time. I haven?t been a natural at a lot of different sports, but I just always kept trying.

PFB: What’s the most difficult part of endurance racing?

RR: The mental part. There are plenty of people who are physically stronger than me. On paper, they have better VO2 max or they’re younger. For multi-hour or multi-day events, it becomes very much about what you’re made of on the inside—about what you do when the chips are down.

PFB: When you’re hours into a race and still have several miles to go, do you ever feel like your muscles don’t have anything left? If so, how do you deal with that feeling mentally?

RR: That always happens! Some people think that the ones who win the races aren’t suffering or dealing with self-doubt, but we do. We are suffering just as much and have those same thoughts pop into our heads. We just aren’t suffering quite as long as those in the back of the pack. There’s always those mind games. Either I deal with it as best I can or I let it get me. The thought of quitting is something I don’t do well with.

PFB: Years ago, a magazine editor nicknamed you the Queen of Pain and, for obvious reasons, it stuck. What nickname would you give yourself?

RR: The Queen of Perseverance. People hear ‘Queen of Pain’ and think I relish in suffering, but it’s more that I always keep trying no matter what. 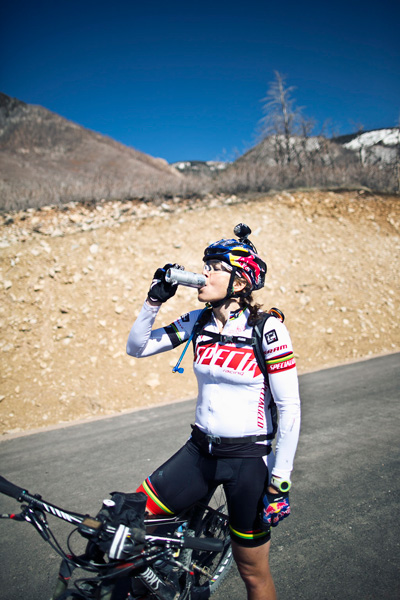 Rebecca’s nickname is the Queen of Pain, which was given to her a few years ago due to her dominance in endurance racing. (image: Josh Glaze)

PFB: What piece of advice do you have for folks who are just getting started and are still wrapping their head around riding a few miles, let alone 100 miles?

RR: It’s baby steps. In high school, I was a cross-country runner and two miles seemed so long. Then in college, three miles seemed so long, and now three miles seems like a sprint. It’s all about perspective. You start small and you build and build. I think there’s a lot of strength starting out with friends. When you’re weak, they’re strong and they keep you going. You’ve got to have a little posse.

PFB: How did advocacy become part of your repertoire?

RR: I got involved with bike advocacy two years ago when it really hit home that all these trails in the Boulder-White Clouds area were threatened to become designated wilderness, which would close them to bikes. It opened my eyes to just how naïve I’d been enjoying riding in all these places without any thought to who put the trails there, who takes care of them, or how quickly they could go away.

Racers are the highest per-hour user group of the trails and the lowest user group involved in advocacy. That’s totally selfish of us. So I got involved.

PFB: When you set the female record for the 142-mile Kokopelli trail from Fruita to Moab, you severely dislocated your finger early on and finished the ride by popping it back into place whenever it would re-dislocate. What does it feel like to know you could win in a fight with Chuck Norris?

RR: Laughs. I think I’d probably run away from him.

A finger didn’t really seem like a good reason to not finish, so I didn’t really give it a second thought until I took my glove off at the finish line—and then I passed out. I think when you’re invested in something you figure out a way around all the bumps in your way. 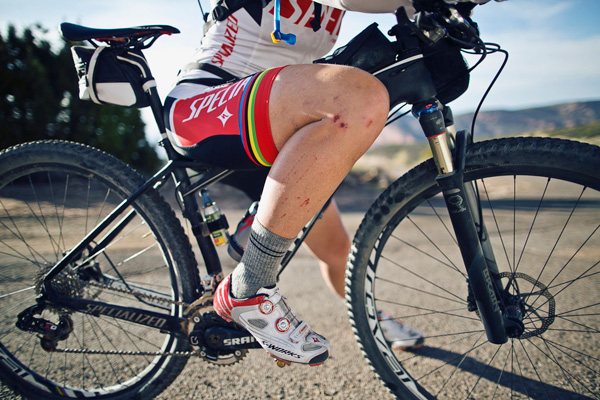