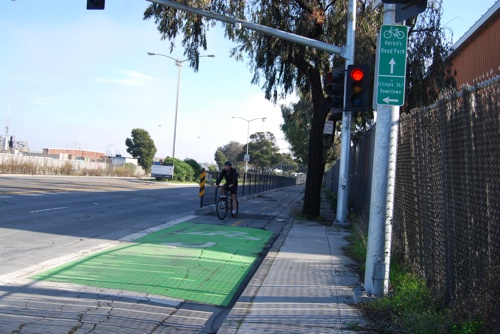 The seasons are changing in San Francisco?the air is becoming increasingly crisp, as the days are growing darker. With the inevitability of winter upon us, now is the perfect time to get outside, ride your bike and enjoy the last few days of Indian Summer. And since the upcoming holiday season can be a stressful time of year, I’ve selected some of the best rides to help you take advantage of the weather by relaxing and reconnecting with nature, all without leaving the city.

What’s a bike ride in San Francisco without a waterfront view? The new green lanes on Cargo Way in the city’s Hunter’s Point neighborhood connect 3rd and Illinois streets to Heron’s Head Park, a 24-acre park located on a peninsula along the southern waterfront of the San Francisco Bay.

Located at Cargo Way and Jennings Street, a short bike ride away from downtown, Heron’s Head Park is a salt marsh that attracts more than 100 bird species each year, including its namesake, the Great Blue Heron. The park, restored in the 1970s, boasts upland trails, a fishing pier and picnic and birding areas.

The park is also home to the EcoCenter, an environmental justice education facility, which helps educate the public about renewable energy, wastewater treatment, pollution reduction and more.

At a little over 1,000 acres, Golden Gate Park is the city’s largest park, home to museums, lakes, flower gardens and even a few bison. It could take more than a few visits to the park to do and see all there is to do, though the ride along John F. Kennedy Drive’s green lanes is among my favorite.

Start your ride at the eastern end of the park, near the Conservatory of Flowers, an ornate Victorian greenhouse that is as beautiful outside as the flowers it houses within. The conservatory, free the first Tuesday of every month, is home to many rare and exotic plants and tropical flowers, a perfect escape from city life.

Continue riding west down JFK Drive until you arrive at the bison paddock, just past Spreckels Lake. View the bison through the large enclosure where they eat, sleep and live year-round. Stop, sit and share a moment with these gigantic animals, an experience not had anywhere else.

By the end of December, John Muir Drive will have new buffered bicycle lanes. Installed in partnership with the Bay Area Air Quality Management District, the lanes are planned to run from Lake Merced Boulevard to Skyline Boulevard. The lanes will provide those on bikes with safe access to two of the city’s lesser-known parks.

Located in the city’s southwestern corner, Lake Merced is a freshwater lake located within a 614-acre park. The park features a golf course, picnic areas, boathouse and fishing pier. The lake is a popular spot for all kinds of recreationalists, including runners, boaters, fishers and birders.

Lake Merced is a great place to be active, while nearby Fort Funston, situated off nearby Skyline Boulevard, is a one of the best places in San Francisco to take in views of the Pacific Ocean.  Located atop the 200-foot high sandy bluffs, Fort Funston is a relatively quiet park, with majestic views of the city skyline and vast ocean?a truly relaxing escape within the city.