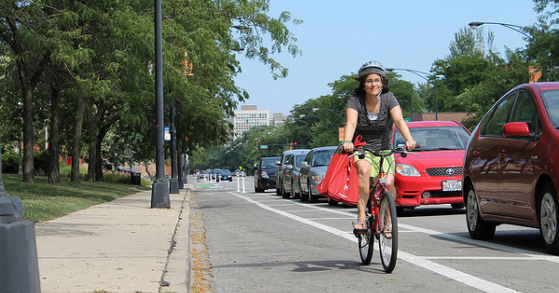 In the public transportation world, there’s a familiar rule that train tracks are better than buses at luring car drivers to use mass transit. The reasons are complicated, but most people agree that it has to do with the fact that train tracks are constantly reminding passers-by of their existence, location and function.

Protected bike lanes on major streets are the train tracks of the bicycle world.

Because protected bike lanes make high-traffic corridors comfortable for people of all ages and abilities to bike on, they make bikes and bike lanes visible to car drivers in a way they rarely are. They serve as a constant reminder of the fact that in some situations, bike transportation makes obvious sense. Situations like, you know, rush hour.

If bike transportation were a product, protected bike lanes on major streets would be its advertising. And rush hour would be the moment of decision. A bicycle whizzing past a car at 5:30 p.m. is as powerful as a 10 p.m. TV spot for Taco Bell on the Cartoon Network.

That’s the insight captured by Austinite Molly Purdin in the video clip below, the last of a series of interesting outtakes we’ve been publishing from our recent video about the rise of protected bike lanes.

“They see the lane,” Purdin notes. “Or they’re stuck in traffic and they see bikes passing them on this protected bike lane, and they say, ‘Oh, I have a bike at home. I use it on the weekend to go mountain biking or go on long rides with my friends, but I could be on it right now and I would already be where I’m trying to get to.'”

When a city puts a protected bike lane along a major urban commuting route, that’s exactly what it’s helping its commuters do.

Video interview by Laura Crawford and Russ Roca. The Green Lane Project is a PeopleForBikes program that helps U.S. cities build better bike lanes to create low-stress streets. You can follow us on Twitter or Facebook or sign up for our weekly news digest about protected bike lanes. Story tip? Write [email protected]