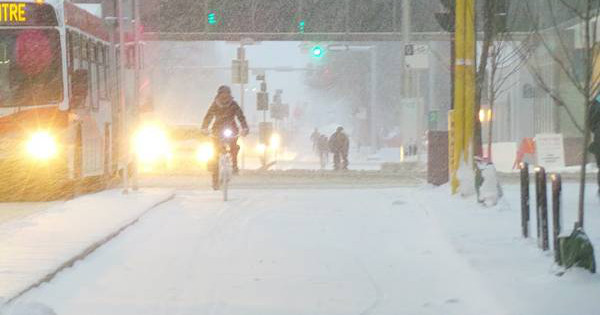 First in a series about making bike infrastructure work in winter, from the folks behind the 2016 Winter Cycling Congress.

Hear me out. If you have ridden your bike through snow or ice, you know your speed goes down as you negotiate crusty and uneven roads, often in the dark. In these conditions, not every driver takes care when passing or understands when they are stuck behind a bicyclist on a snow-narrowed street. On streets with lots of high-speed motorized vehicles, it can be especially dangerous to mix cars with vulnerable road users like bicyclists. Protected bike lanes and off-street trails and paths are needed to make bicycling safe enough to be an accessible mode of transportation for people of all ages and abilities in all seasons.

Unfortunately, this picture of winter bicycling appears grim to some people and winter has too often been used as an argument against investing in bicycle infrastructure and proper maintenance in Northern cities. Why invest in infrastructure that will go unused for half the year? Who wants to risk life and limb to pedal a bicycle through the dark and frozen winter landscape? No one, it is assumed.

Those of us organizing the Winter Cycling Congress 2016 — to be held 2-4 February in Minneapolis-Saint Paul — disagree. That’s not just because we’ve observed more and more bicyclists on the streets of the Twin Cities — the coldest large metropolitan area in the United States — over the past couple of years. Even with less than ideal on-street conditions, 20 percent of bicyclists keep riding all winter in Minneapolis and Saint Paul. 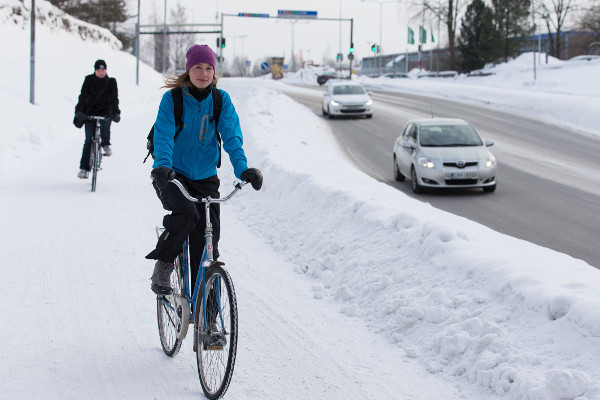 This trend is not unique to the Twin Cities or even a trend necessarily. Since 2013, hearty people from all over the world have been gathering at the Congress once a year to share best practices and experiences related to winter bicycling. What has become clear is that when the conditions are right, winter bicycling can be normal. It can be child’s play. In Oulu, Finland, nearly 50 percent of 13-17 year-olds bicycle year-round.

Which raises the question: why? What is so right about the conditions in Oulu? The short answer is that they have a 500-mile combined bicycling and pedestrian network connecting homes with workplaces, schools, shopping and other destinations people need to reach in daily life. The network is separate from the road network used by cars and includes 300 grade-separated crossings and ample space alongside facilities for snow storage. The network is fully lighted and 98 percent of the network is maintained throughout the winter.

(The long answer to the Oulu question is available here.) 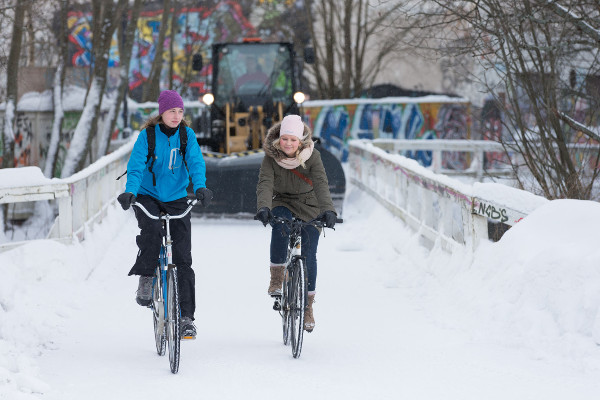 Oulu compacts snow during winter instead of scraping down to bare asphalt. This means no salt is used. Gravel provides traction. Photo: Eltis.

The founder of the Winter Cycling Congress series, Timo Per?l? is the bicycle coordinator in Oulu. He said their philosophy is: if you build it, you should maintain it. In Oulu, the bicycling network is maintained for most of the winter by compacting snow and sprinkling with gravel for traction. Salt is not used at all.

The result of these efforts is that 12 percent of all daily trips in the winter are made by bike. Average mode share for bicycling over the course of the year is 22 percent, which is why Perala thinks it is possible to increase winter bicycling by encouraging more regular bicyclists to keep riding through the winter.

Oulu is only one example of a winter bicycling city — cities of all sizes and in varied cold climates experience barriers associated with winter and have attended this congress — but it highlights what is possible with good bicycle planning. A bicycling network made up of safe facilities such as protected bike lanes is the backbone upon which winter cycling can grow.

Cities across North America are investing in bicycle infrastructure right now, which means we have the opportunity to design for year-round use right from the beginning. In winter, bicyclists need even more protection than they do in other seasons. Well-designed facilities — for example those designed with accompanying space for snow storage — can actually make maintenance easier and contribute to making bicycling a safe, comfortable and convenient mode in every season.

We’d love to have you join us at the Winter Cycling Congress 2016 or share your knowledge as a speaker. Proposals to present are due Sept. 30. We’ll be posting again soon about lessons learned from past congresses and inspiring winter cities from around the world.