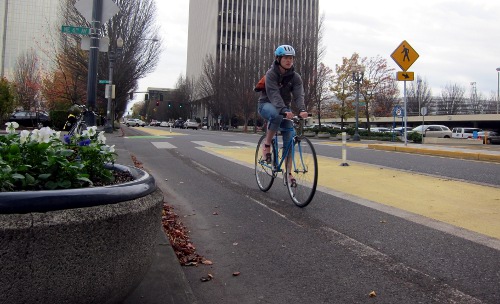 Bikes are simple machines. But cities that are building great bikeways are getting backup from some simple electronics.

Just a decade ago, the jobs these devices do would have required far more time and expense, or not been done at all.

Peter Koonce, manager of the Portland Bureau of Transportation’s signals and street lighting division, is also a bike commuter and a nationally active reformist in the world of traffic signals. But I like to think of him as the Q to Roger Geller‘s James Bond — always on the lookout for affordable electronic devices that can help build a simple, effective protected bikeway like this one. Here are three Koonce uses.

It’s an iron law of civics: People complain about change. That’s why, to inoculate projects against unfair criticism that bike lanes are slowing traffic, Koonce and his colleagues use portable Bluetooth readers that detect exactly how much cars are affected.

Portland’s new protected bikeways and on-street parking on Northeast Multnomah Street, for example, eliminated two auto lanes. They might have been a cauldron for complaints.

That’s where the Bluetooth readers come in. They can scan the digital signature of drivers’ handsfree devices as they zoom past.

“We can identify that, hold it in a queue, and match it at the next location, so we know how long it took to get from point A to point B,” Koonce said.

Portland has three of the mobile units, which cost about $2,500 each plus $30 a month for cellular data service. They’re installed at roadside locations as needed.

“If you can tell them that the average travel speed from 15th and Multnomah was 3 minutes 32 seconds, and after the project was 3 minutes and 40 seconds — you can’t really whine about 8 seconds of delay over a mile,” Koonce said.

“It scrambles your MAC address,” he said. “It’s not like DNA where we know it’s your Bluetooth.”

Most drivers don’t have Bluetooth devices onboard, of course, and others might have multiple ones. But since the point is to cheaply measure speed, it doesn’t matter. “Even if you get one data point every hour, it’s better than nothing,” Koonce said. 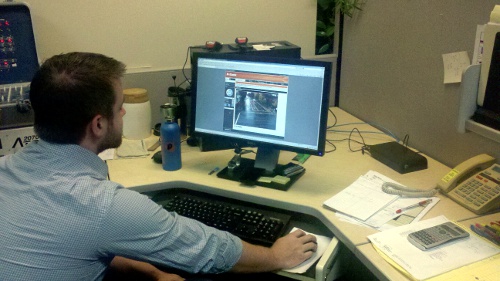 Another tool Portland uses to verify that projects are functioning as needed — and to “counterattack the people who say it’s the worst thing ever” — are the 15 digital video cameras the city now uses in place of many site visits.

“We buy these cameras used off of eBay,” said Koonce. “The cameras are about $2,000 installed — maybe a little more if the conduit installed is not so good.”

The Multnomah Boulevard green lane reduced the theoretical auto capacity of the street by about 40 percent — but even after that, the street was only “at about 85 percent of capacity” during peak hours, Koonce said.

If a call comes in from a neighbor that traffic is backing up, a city worker can pull up the video during rush hour and easily monitor it over the city’s virtual private network.

“Sometimes the complaints are one person’s perspective on one particular day, but they make it seem like it’s the end of the world,” Koonce said.

The city’s inventory of cameras, which it started building about six years ago, put complaints instantly in perspective. Going fully wireless might cut the installation costs and therefore the cost, Koonce noted, but city staff prefer working with wires at the moment. The cameras are sometimes relocated to a new project, further economizing. 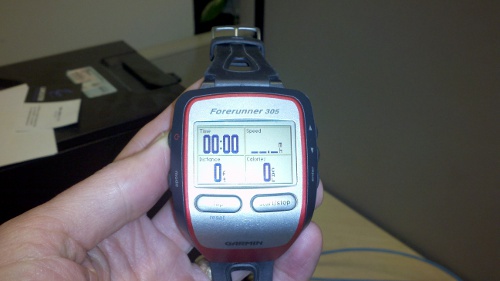 The final electronic gadget Portland likes to use to test bikeways is the simplest of all: a set of GPS units carried by bike-riding volunteers that gather second-by-second bike trip data and beam it back to city headquarters.

The devices are Garmin Foreigner 205s, and Koonce gets them for about $130 apiece. The city has a handful and hasn’t lost one yet, said Koonce, who’s recruited “a random sample of people who follow me on Twitter” to haul around the units for tests.

“You can just throw it in a bag,” he said. With data from the volunteers’ units, Koonce has tweaked signal timing to fit both car and bicycle travel on Hawthorne Boulevard and Williams and Vancouver avenues.

That’s especially useful on slopes, where bike speeds are hard to predict and vary widely.

“As a traffic engineer, you’re trying to do things for modes that we haven’t always collected a lot of data about,” Koonce said. “I’m kind of a geek about that stuff.”