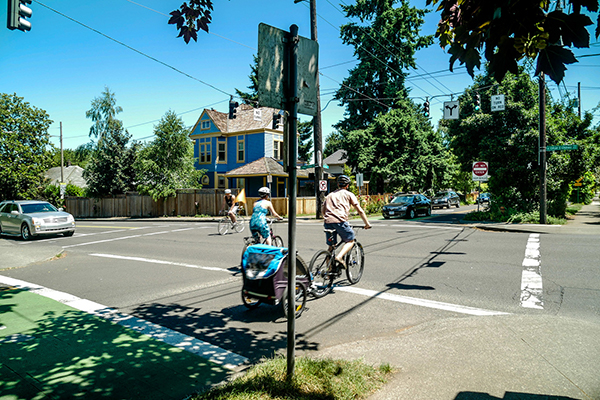 The Oregon bike tax is officially being implemented, with retailers collecting $15 on the sale of new bicycles.

The Oregon Department of Revenue has provided detailed guidance on which bikes the tax applies to and how to submit quarterly payments when they are due this spring.

During the last several months, lawmakers in Oregon debated a long-term transportation funding bill that will make new investments in the state’s infrastructure. Late last week, the House and Senate passed this legislation, and we expect Governor Kate Brown to sign it into law soon. The overall package is $5.3 billion and will make broad-based improvements in Oregon’s roads, bridges, ports, transit system and active transportation options.

To generate revenue for these investments legislators proposed several new taxes on road users, including a tax on the sale of bicycles. In May, lawmakers floated the concept of a five-percent tax on new bicycles. Following outreach to lawmakers from both the bicycle industry and bike advocates, the first draft of the funding bill contained a three-percent tax on new bicycles that retail for $500 or more and have a wheel size that is 26 inches or greater. Electric bicycles, or e-bikes, would have been subject to a new excise tax on motor vehicles rather than the bicycle tax, creating an extra administrative burden for retailers.

Despite the fact that the bill contained hundreds of millions of dollars for new bike infrastructure, PeopleForBikes vigorously opposed this tax due to the likely adverse effects it would have on bicycle retailers and people who want to purchase and ride new bikes. We worked closely with the Bicycle Product Supplier’s Association, Oregon-based bike industry, and Oregon’s state advocacy group, The Street Trust, to fight the bike tax provision of the bill. Our campaign included action alerts to our industry and grassroots members, hundreds of phone calls to local businesses, and most importantly, constant communication with the legislature’s Joint Committee on Transportation that authored the bill.

Our objective was to eliminate the bike tax, and if elimination was not feasible, restructure it in a way that would be less damaging to the bike industry and people who ride bikes. As a result of these efforts, lawmakers revised the bicycle tax to impose a more reasonable burden on bike purchasers.

The revised transportation bill will impose a $15 flat fee on new bicycles that retail for $200 or more and have a wheel size that is 26 inches or greater. The new bike tax is expected to raise $1.2 million annually?a sum that represents only a tiny portion of the $5.3 billlion investment package. Other new taxes and fees in the bill on motor vehicle users include:

The bill provides significant new money?most of it new?for bicycle infrastructure: an average of $22 million annually for the next ten years. A breakdown of the average annual investments is below:

Beyond this dedicated funding, additional proceeds from the highway trust fund may be used for bicycle infrastructure. Local communities can exceed the one percent statutory minimum for investments in bicycle infrastructure that is outlined above. With nearly $200 million of new trust fund revenue being sent to counties and cities across the state each year, many local governments are likely to spend more.

While the $15 fee on new bicycle sales in the amended legislation is not an ideal funding mechanism, it is a major improvement from the bike tax included in previous proposals. For example, a bike that retails for $3,000 would have been subject to a $150 tax under the initial proposal for a five-percent tax rate. Once this bill becomes law, the tax will total $15. The input of bicycle industry and advocacy leaders during our campaign was critical to decreasing this tax burden.

Outside of the bike tax, the bill will bring significant benefits to bike riders in Oregon, and it provides stable, long-term funding for bike infrastructure. These investments are critical to our central mission of making bike riding safer and more accessible for everyone who wants to ride. The bike tax may also strengthen the political position of bike riders during future transportation funding conversations by bolstering our status as a group that contributes.

With respect to implementation of the tax, we remain concerned by the treatment of e-bikes under the revised bill. Electric bicycles will be subject to the .5 percent excise tax on motor vehicles rather than the bicycle tax. We will continue working with our partners on companion legislation to revise the application of the tax to e-bikes, and ease the administrative burden of tax collection on retailers.

Thank you to our supporters who weighed in to oppose the bike tax. Though we were not able to eliminate the tax, your voices enabled us to improve it while maintaining significant new funding for bike infrastructure.

We will continue to closely monitor this program to evaluate the amount of money collected, the administrative costs, how the new tax dollars are spent and what bike retailers say about its actual impact on business.