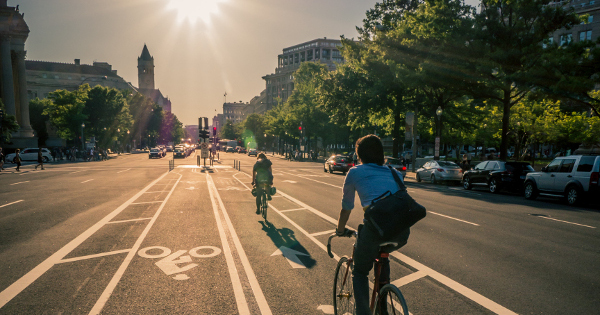 For the first and second U.S. cities to start building networks of modern protected bike lanes, the payoff seems to have arrived.

In both Washington, DC, and New York City, the rate of bike commuting has doubled since 2009, according to Census figures released Thursday.

Powered by one of the country’s most successful bike sharing systems, a growing painted lane network, a handful of protected lanes and a burgeoning bicycle culture, Washington DC vaulted to 4.5 percent of commutes by bicycle in 2013, up from 2.2 percent in 2009. Among major U.S. cities, that estimate would place DC second only to Portland, Oregon as a bike commuting hub.

“DC has been coming up strong for several years,” said Darren Flusche, policy director for the DC-based League of American Bicyclists, in an interview. “It’s the nation’s capital; I keep waiting for someone to say they’re the nation’s bike capital.”

New York City, meanwhile, has a lower biking rate — just 1.2 percent, up from 0.6 percent in 2009. But that comes out to 46,000 daily bike commuters, about as many as Portland and DC combined. New York added an estimated 10,000 bike commuters in 2013 alone, its fifth straight year of growth.

In fact, those 10,000 net new bike commuters in New York accounted for the entire nationwide increase in bike commuting in 2013.

Flusche said that though Washington DC is finally using protected bike lanes on L and M streets to create a simple low-stress grid, “the city’s trying to catch up with the infrastructure” to support its new bike commuters.

“I’m now biking to work and hitting bike traffic jams on 15th,” Flusche said, referring to the city’s first protected bike lane, which opened in 2009. “You’re in a pack the whole way. That didn’t happen a few years ago. The city’s sort of building up these arterials that allow you to bike with a lot of friends.”