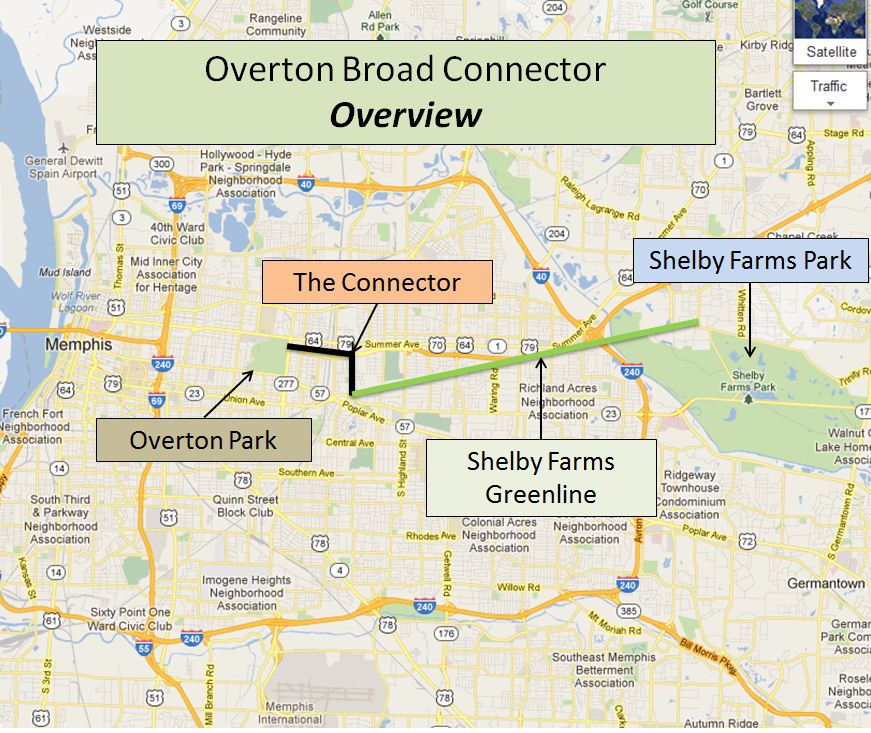 Memphis’ first Green Lane Project, The Overton Broad Connector, will link Overton Park in Midtown Memphis to Shelby Farms Park just east of Interstate – 240.   Below is the “30% design,” a block by block narrative of the project’s first draft assembled Fuss & O’Neil for Livable Memphis and the City of Memphis.

The Overton Broad Connector is among a small number of two-way cycle tracks on two-way streets in the United States, and it may be the only two-way cycle track in the country protected by angled parking.  Such innovation also requires commensurate consideration.  So beyond sharing the great work already done on the connector, this post is intended to promote dialogue about the best possible design for the Overton Broad Connector (OBC). 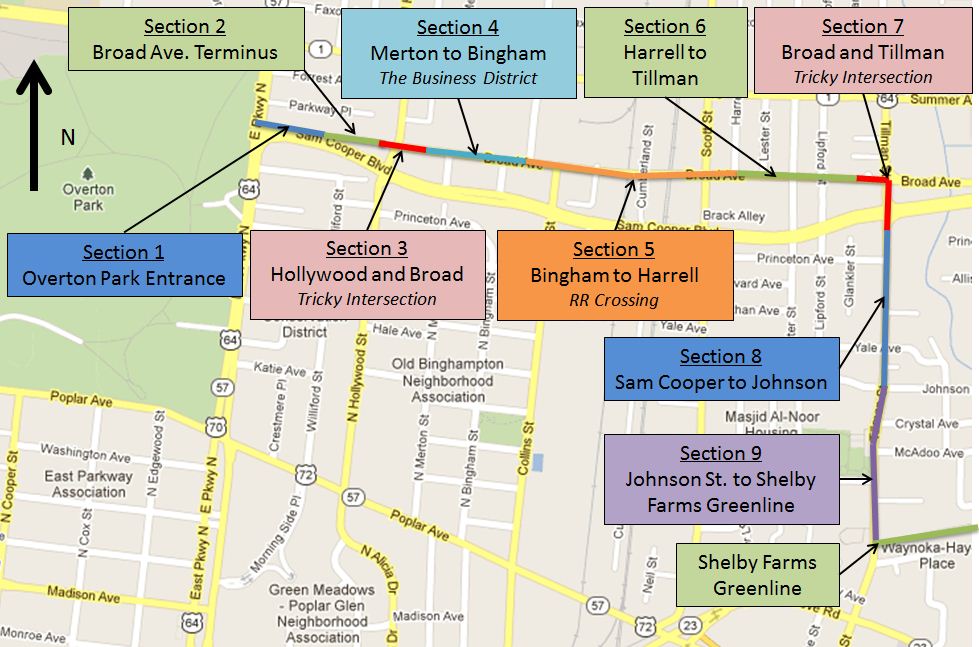 There are nine sections along the proposed route.  Each section has been treated in detail during the engineering and design phase…but don’t worry – the narrative that follows includes limited text, relying instead on pictures to provide a clear and concise explanation of the Green Lane. 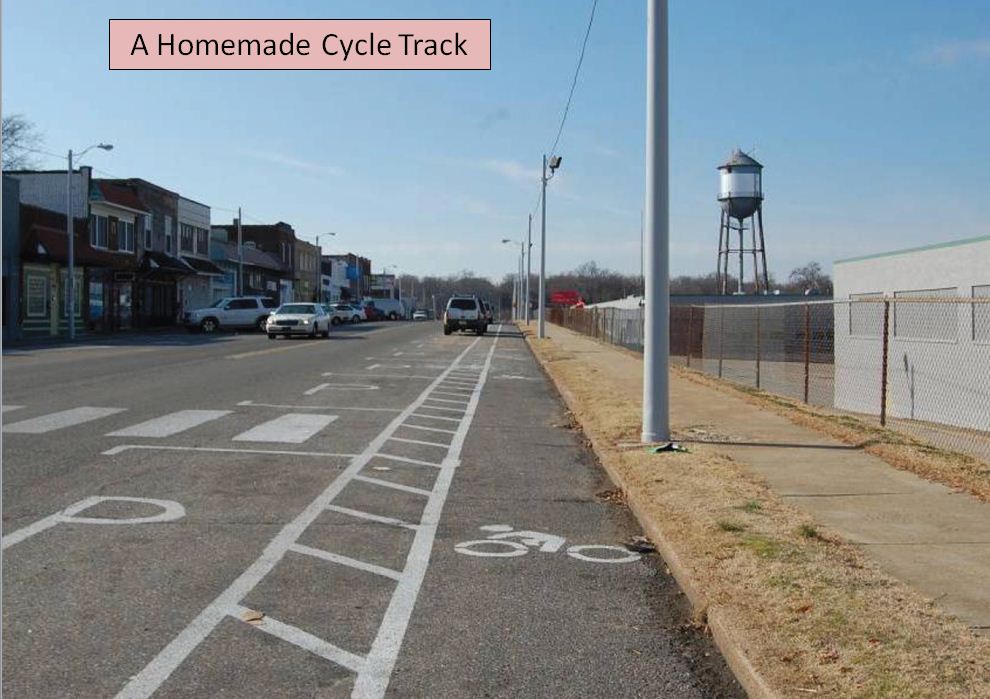 Using the model of tactical urbanism, advocates and business leaders built Memphis’ first protected bike lane on Broad Avenue – the homemade cycle track seen above.  On the right side of the photo, you’ll see the Broad Avenue water tower, a signature symbol of the growing business district. 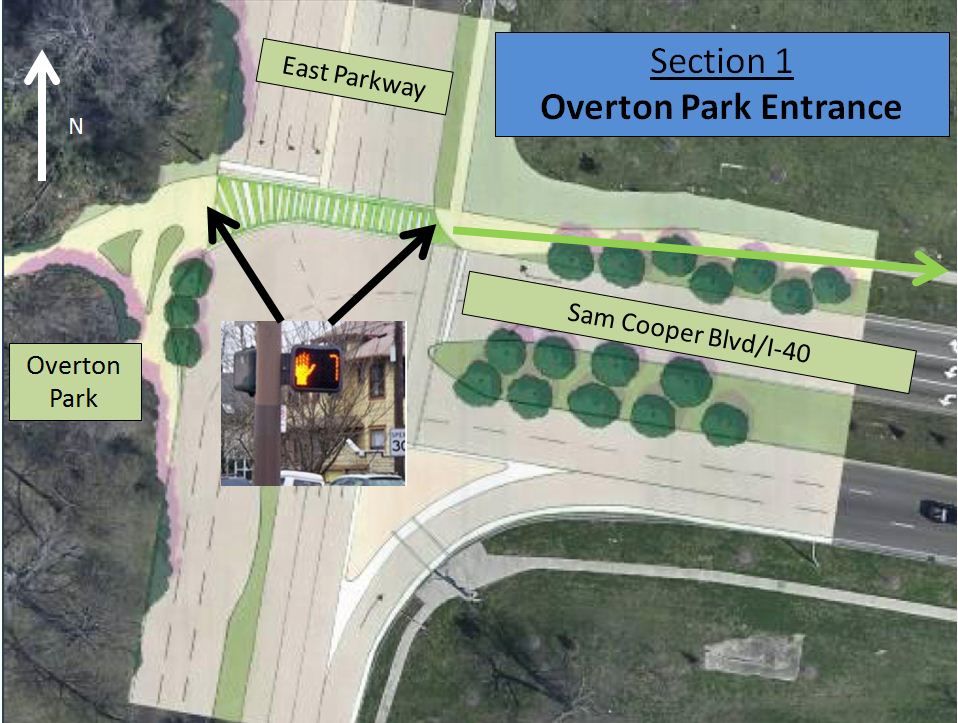 Section 1 of the OBC provides a gateway to Overton Park.  The green and white striped crosswalk will provide a path for people on bikes across a very busy 6-lane roadway.  Pedestrian signals with illuminated counters will encourage safe crossing behavior.

The green arrow above points the way east towards Broad Avenue, where people on bikes will use a side path for 500 feet before entering the on-road section of the Green Lane. 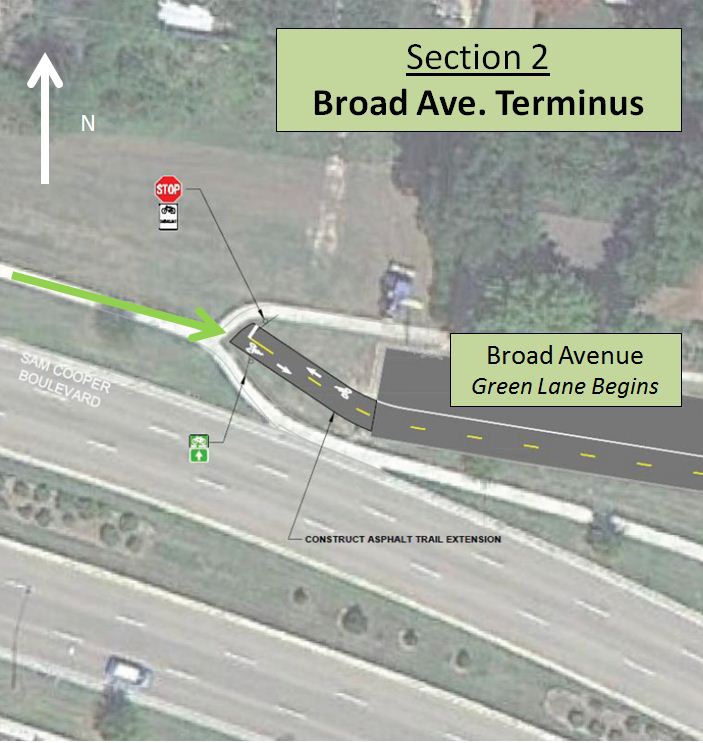 Section 2 will lead travelers from the side path to the cove where Broad Avenue ends.  The two-way cycle track will begin in the cove and carry riders to the cycle track’s first major intersection. 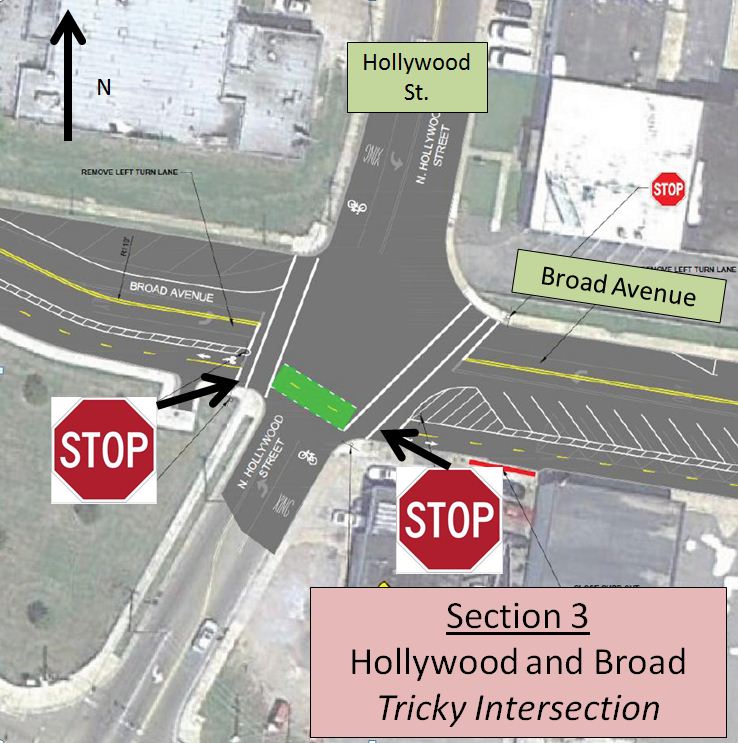 Section 3 presents the first major challenge to planners and engineers.  Sam Cooper Blvd, one block to the south of Hollywood and Broad, is a major arterial roadway that turns into Interstate-40 further east.  The interstate was slated to run directly through nearby Overton Park until citizens stopped the project in the early 1970s.  Hollywood serves as a major feeder to Sam Cooper/I-40, and traffic regularly backs up through the intersection.

With this in mind, engineers have recommended bicycle-specific stop signs on the east and west side of the cycle track.  Green thermoplastic in the intersection and on-street markings will signal to people traveling north or south in cars to proceed with caution. 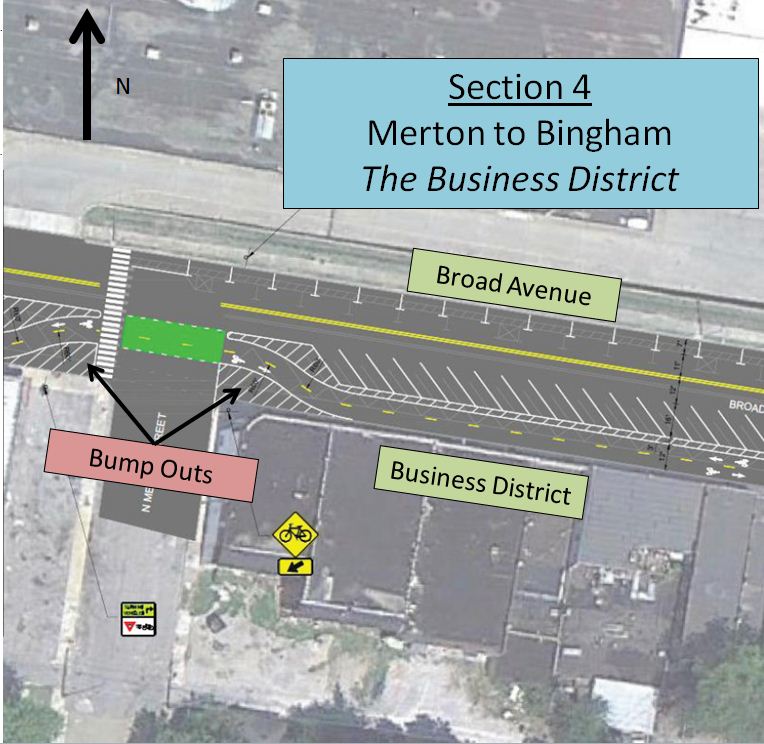 Section 4 is perhaps the only section of roadway in the United States with a two-way cycle track protected by angled parking on a two-way street.

At intersections, the cycle track aligns bicycle traffic with adjecent with car traffic to improve the visibility of people on bikes for turning motorists.  As an added benefit, these bump outs provide space for planters, pedestrian promenade, and improved access to sidewalks. 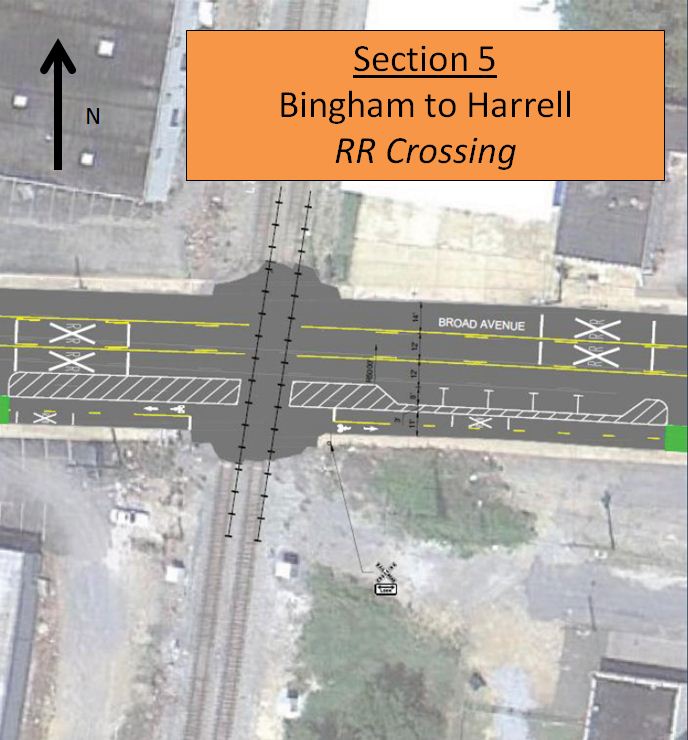 In Section 5, the Green Lane continues past Broad’s prime retail corridor into a warehouse district.  Three sets of train tracks cross Broad Avenue in section 5, which may require the city to significantly upgrade the crossing signals. 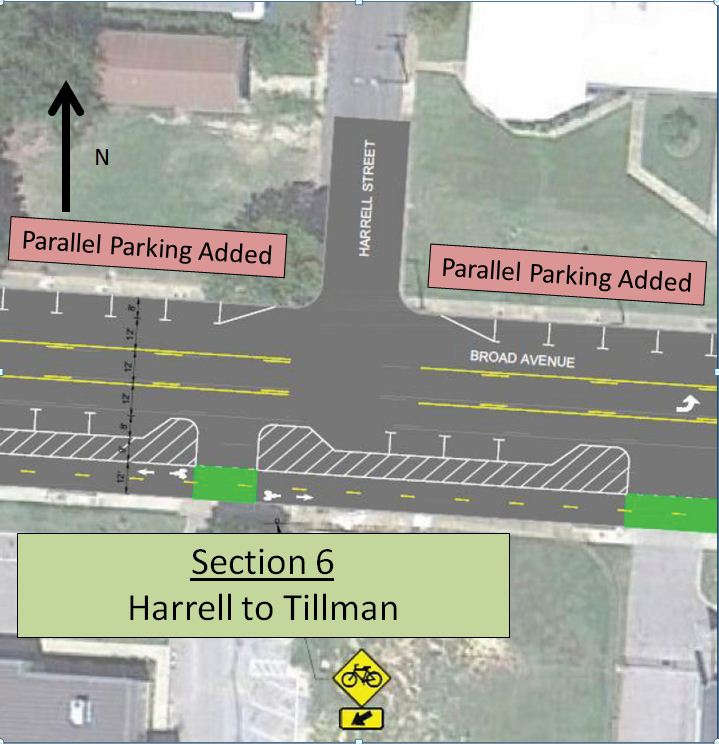 In Section 6, the roadway widens to allow parallel parking on both sides of the street.  Green thermoplastic will be installed on the asphalt in locations where people in cars and people on bikes should remain especially mindful. 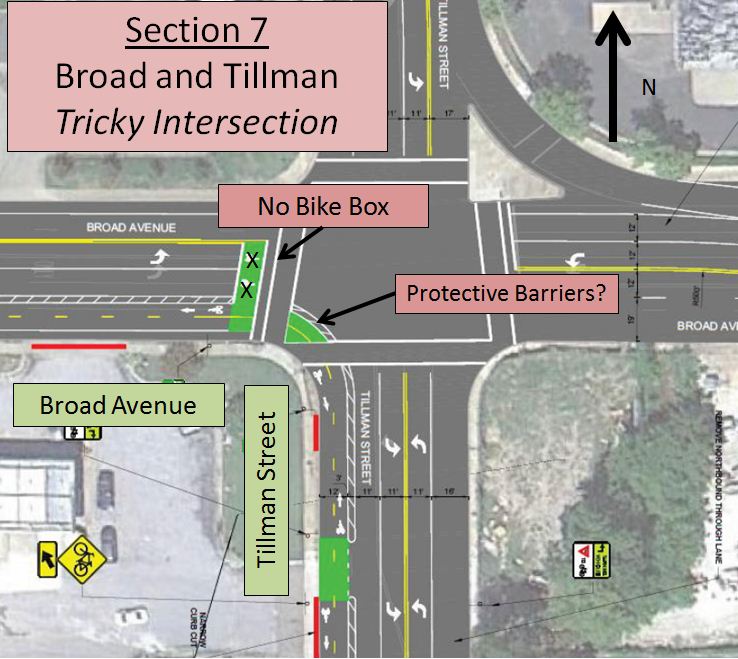 Section 7 presents another major intersection.  The Green Lane will hug the curb along this turn from Broad Avenue onto Tillman St.

The bike box above is explicitly discouraged in guidance provided by North American City Transportation Officials (NACTO) design guidelines, so it will be removed before completing the next phase of design.  The major questions still to be answered at this crossing include: 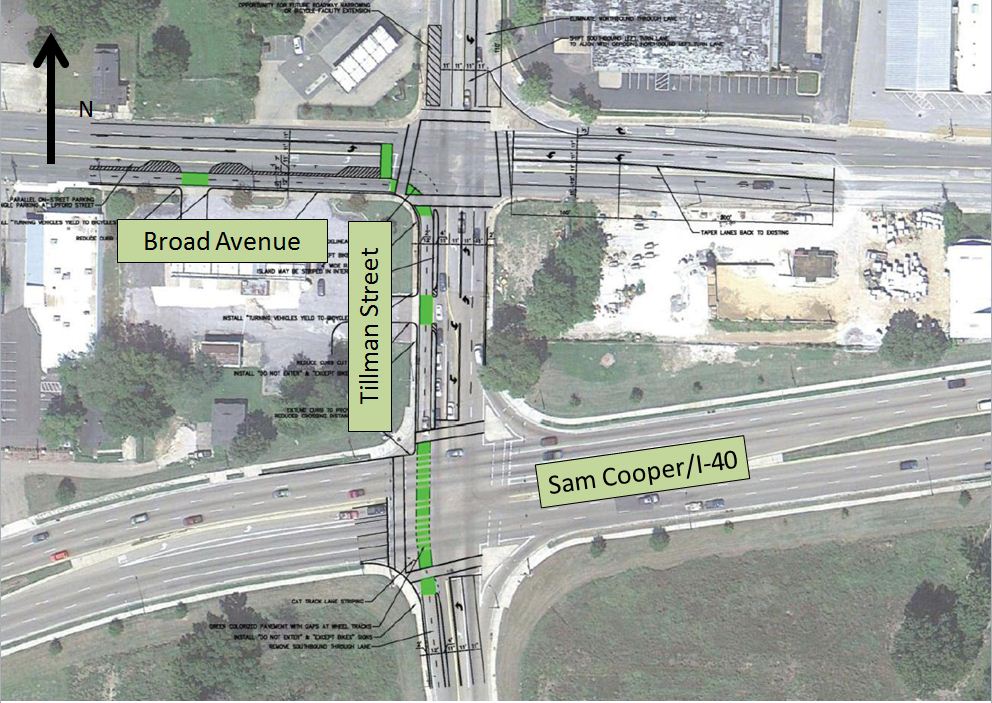 The image above illustrates just how close Sam Cooper/I-40 is to Broad Avenue, bringing us to the next major intersection along the route. 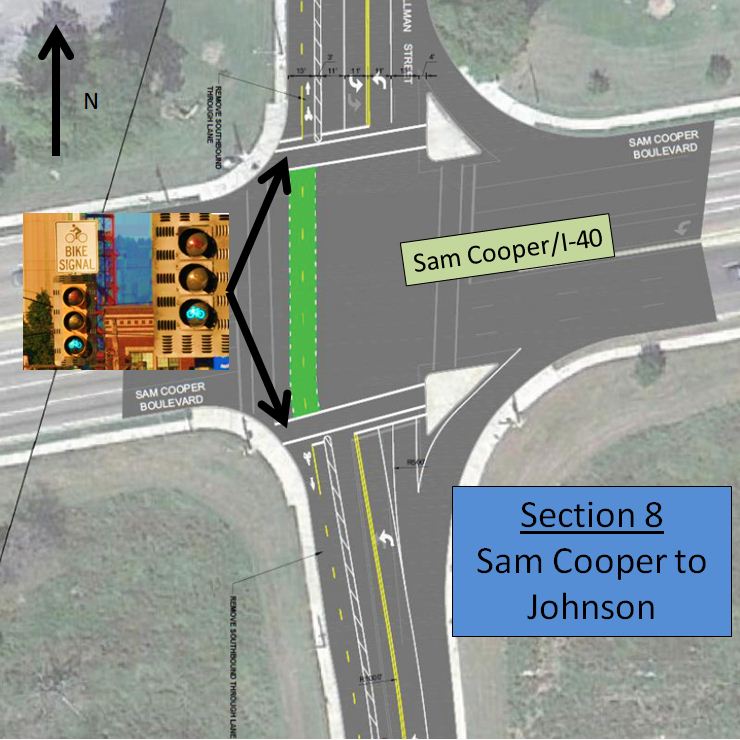 In Section 8, people on bikes will cross 7 lanes of traffic at Sam Cooper Boulevard/Interstate-40.  Green thermoplastic will draw the attention of people in cars to the bicycle crossing and a bicycle specific signal will allow people on bikes to cross the wide roadway using their own signal-phase.  People on bicycles will clear out of the intersection before cars are allowed to proceed. 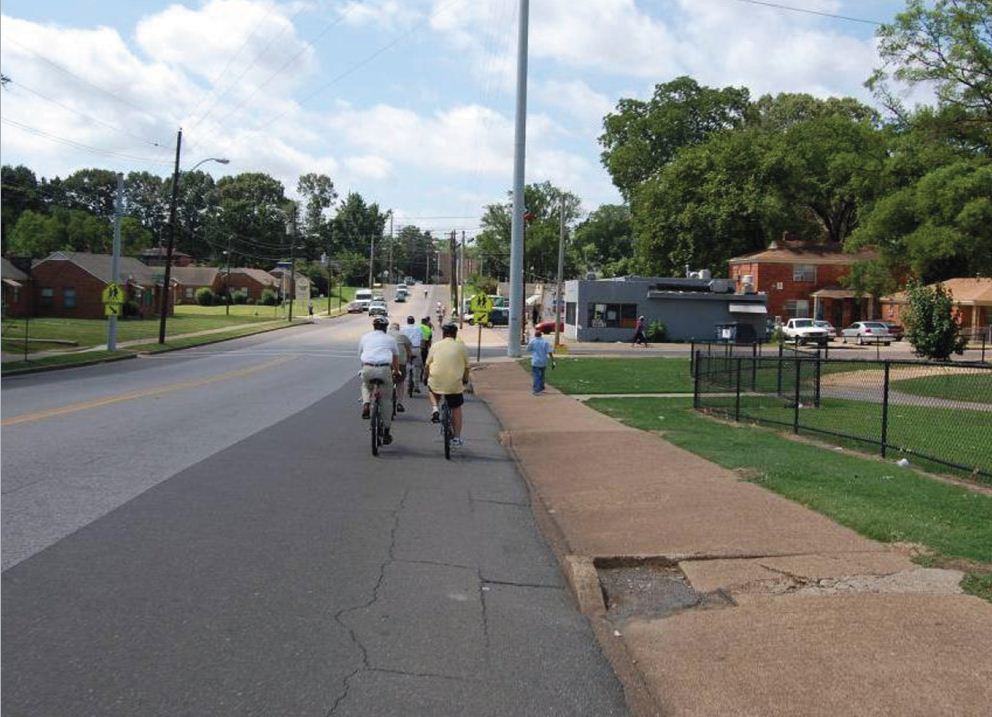 The image above illustrates what Tillman, just south of Sam Cooper, looks like today.

Below is the planned transformation. 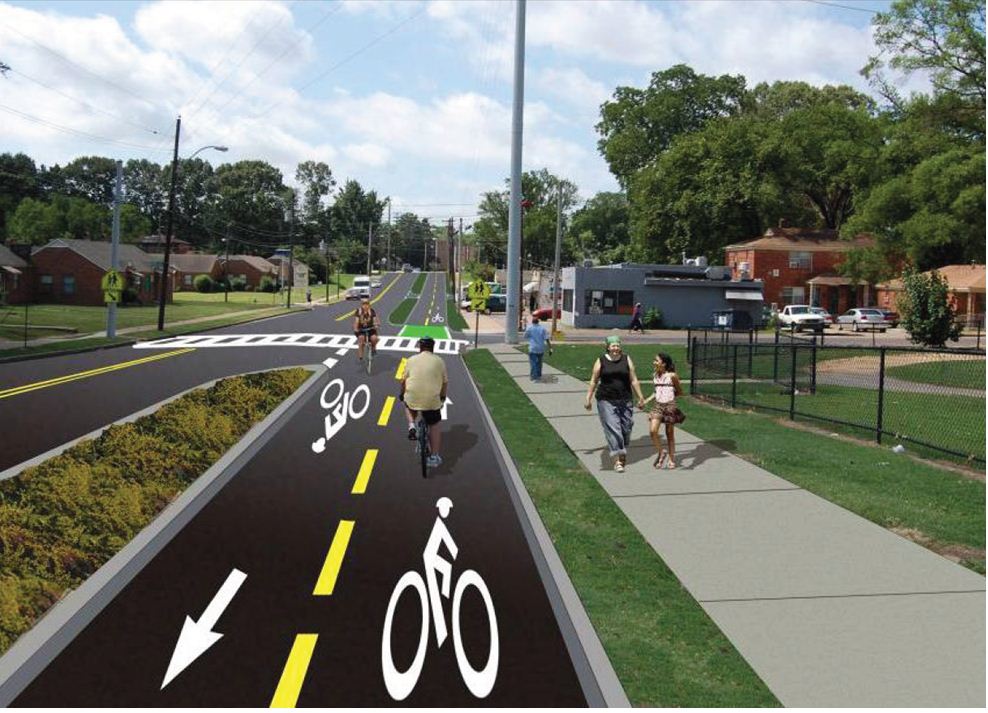 The final two sections of the Green Lane are decidedly more docile. 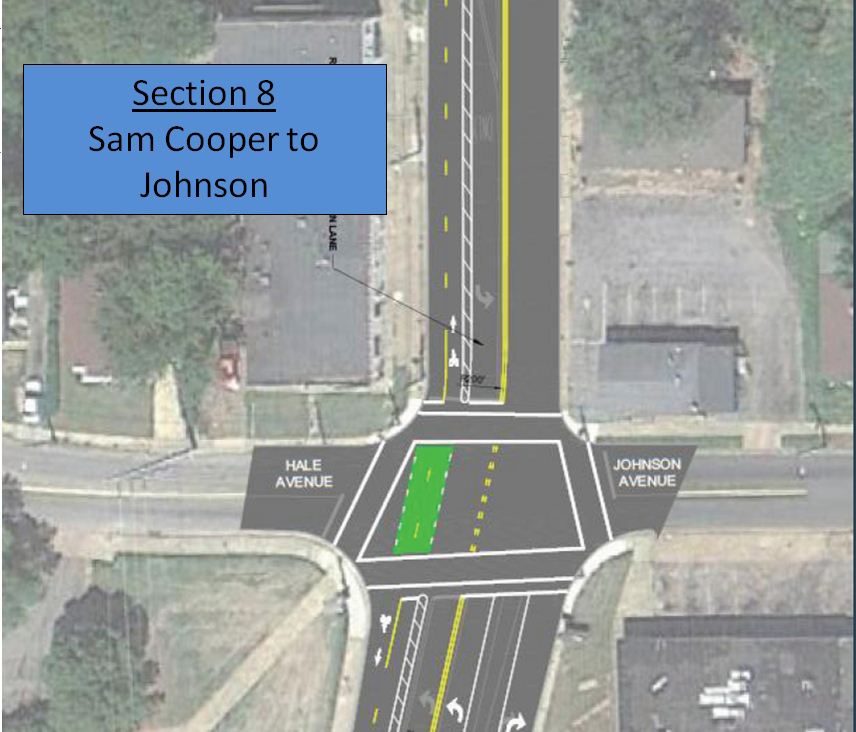 The two-way cycle track, continuous since Overton Park, remains protected along Tillman Street in Section 8.  Engineers are still considering the best method of protection for the cycle track, though delineators like those seen on the Kinzie St. Protected Bike Lane in Chicago would work well. 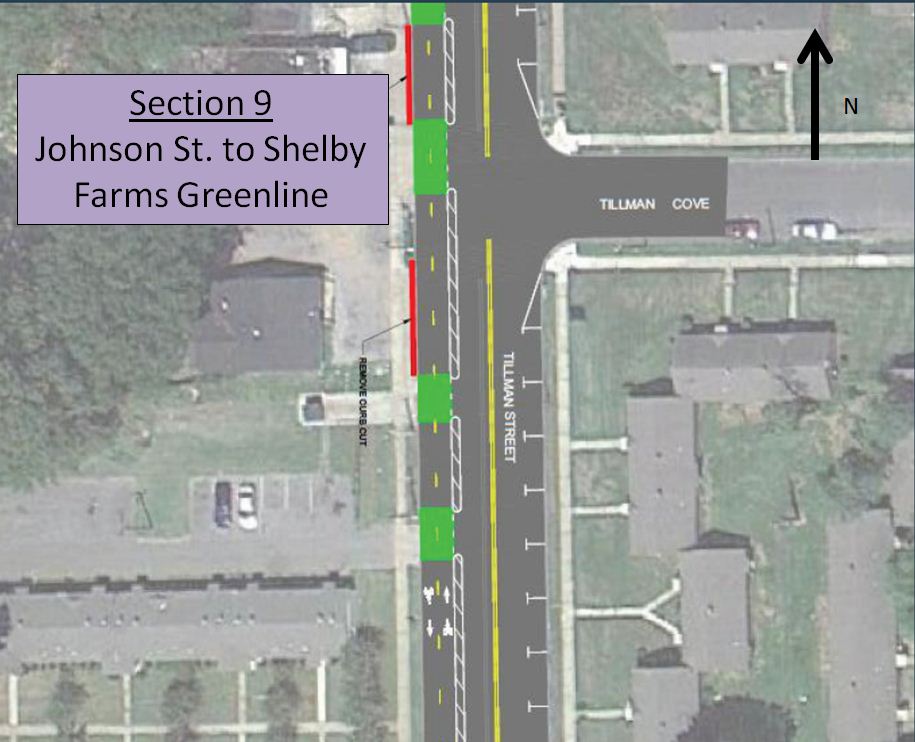 Section 9 includes sections of sidewalk highlighted red.  These stretches, also seen in previous images of the route, are underused driveways recommended for closure by the City of Memphis.

The presence of numerous driveways and side streets present a challenge to planning protected bike lanes: decreasing the number of cars crossing the bike lane improves safety.

Additionally, traffic engineers are often forced to limit anything that would impede sight lines for turning drivers – including parked cars. Given Memphis’ wide streets and limited fiscal means, on-street parking often proves a popular and cost-effective bike lane protector.  Though an obvious challenge in many modern-American urban environments, as a general rule limiting side streets and driveways makes for safer protected bike lanes. 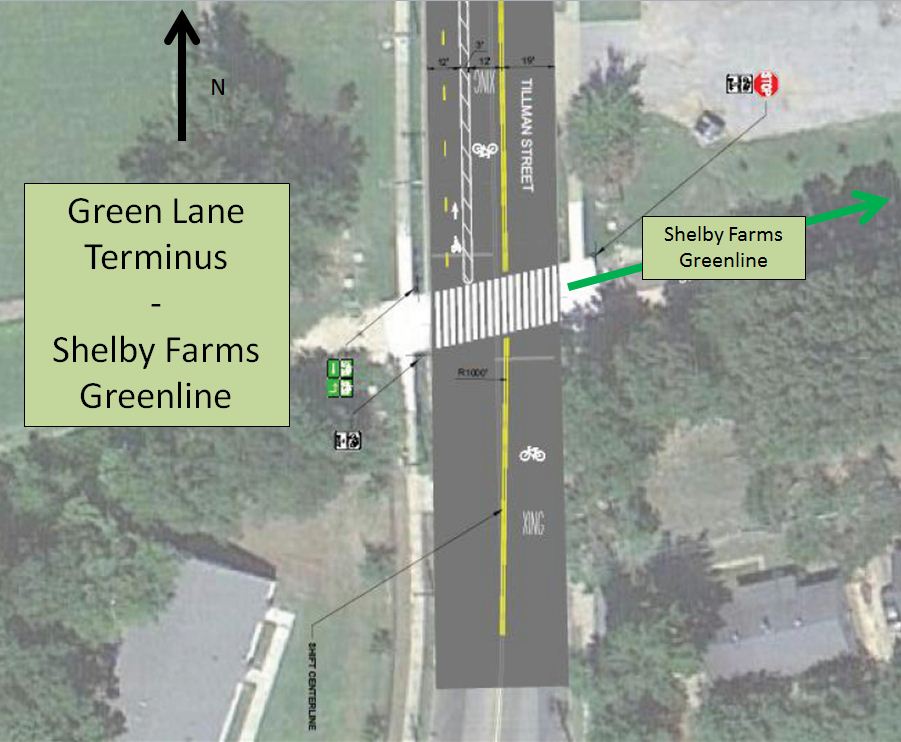 After 1.8 miles, the Overton Broad Connector carries riders to the western entrance of the Shelby Farms Greenline.  The next round of drawings will illustrate a safe way to transition riders from the Green Lane on the west side of Tillman to the Greenline on the east side of the roadway.

While there is still work to do, the drawings above are a testament to the power of collaboration between national partners, local advocates, business leaders, and a municipality – proof that any city in the United States can engineer a world class Green Lane.

Stay tuned for details on Memphis’ next street transformation: Cleveland Avenue in front of the 600,000 square foot Sears Crosstown building.