Memphis: Building a Better City, One Green Lane at a Time

Memphis, by virtue of its place among 5 other Green Lane Project cities, is a leader in the development of bicycle infrastructure in the United States.

And while many cities across the United States stack up mile after mile of bike lanes, if we measure progress only by the total number of bike lanes constructed we run the risk of obscuring the best part of the story. In Memphis, though we’ve built a respectable 45 miles of bike lanes in the last two years, understanding the municipality’s about-face helps frame the Bluff City’s recent progress – especially given the slower rate of turnaround among other cities rated as the worst places for bicycling in 2008.

But seen against the Great Recession of 2008, as American metro areas continue to face difficult financial decisions, the story in Memphis becomes even more important.  While San Bernadino has gone bankrupt and Detroit has considered bulldozing neighborhoods, some urban areas may be inclined to follow the lead of the U.S. Congress and reduce their focus on biking and walking.

But if courage emerges when we are most afraid, perhaps leadership is most relevant when impending peril demands a choice.

In August of this year, the Memphis Commercial Appeal reported that “total property-tax collections in Memphis fell from $384.2 million in the 2008 fiscal year to $365.2 million in 2011.”  Local officials project that the situation may only get worse next year.  Property taxes are key because they provide the lifeblood of municipal revenue: they fund the repair of our sewers, provide for the repaving our streets, and often property tax dollars underwrite the construction of bike lanes.

It is within this context that Memphis, recently rated as the poorest metropolitan area in the nation, made a choice.  Memphis – a 350 square mile city (that’s the size of Los Angeles with less than one eighth of the population) made a commitment to building new bike lanes when we repave our city roads.  Maybe most importantly, we want the best possible bike lanes: Green Lanes. 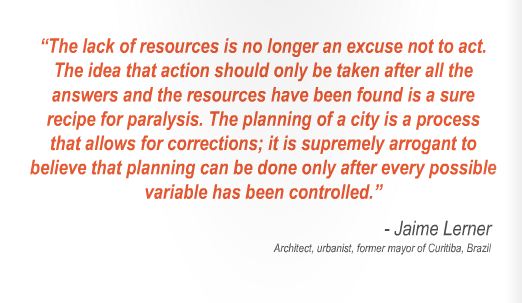 The quote above appears inside the cover of Tactical Urbanism 2: Short Term Action, Long Term Change. It captures a sentiment that is particularly salient among community advocates and political leaders in the City of Memphis.  While citizens and public officials cannot ignore the fiscal challenges facing the city, they do not use finanical challenge as an excuse not to build the best possible infrastructure.

As Memphis Mayor A C Wharton explains, “Our streets move us, and not just from place to place, but they also define life in our communities.  Streets are shared spaces – they belong to everyone…and our streets no longer serve everyone well enough, because the way people are getting around is changing.  Walking, biking and transit use are growing in popularity.  We need to design our streets to better serve all users.”

City Engineer John Cameron adds that it is important to ask “how can you build elements into the street that will be of benefit to [all] users, will bring value to the neighborhood, stimulate economic activity, and make the street somewhere people want to be?”

A commitment to building the best possible streets in Memphis has led the municipality to plan Green Lanes in future paving projects. 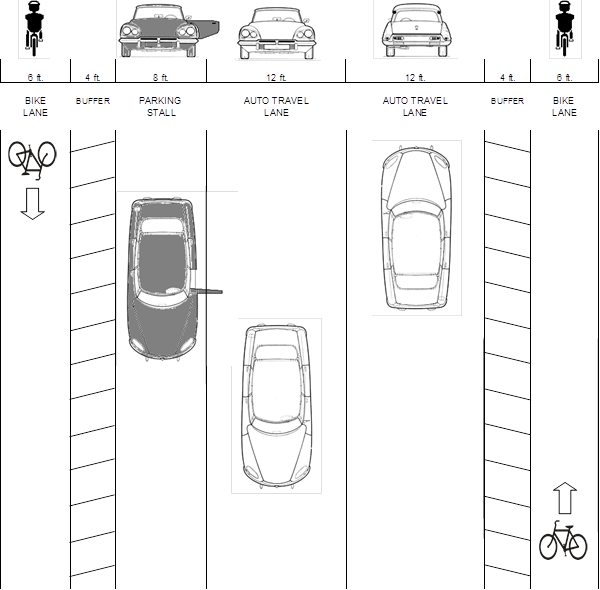 A commitment to building Green Lanes as a matter of routine city business is crucial, but communities like Memphis with increasingly limited financial resources are challenged to think creatively about how to get the job done.

A perfect example of the kind of urban ingenuity required is the MEMFIX Cleveland St. event, a day long demonstration of what a revitalized neighborhood might look like.

The day’s activities will revolve around the Sears Crosstown Building, a nearly 90 year old 1.4 million square foot building vacant since 1993.  The hulking urban space will be re-invented in a demonstration akin to the New Face for and Old Broad event in October of 2010, which figured prominently in securing funding for the Overton Broad Connector Green Lane Project.

The MEMFIX event, in addition to modeling a vibrant retail environment, will include a redesigned Cleveland St. featuring protected bike lanes on both the east and west side of the roadway. 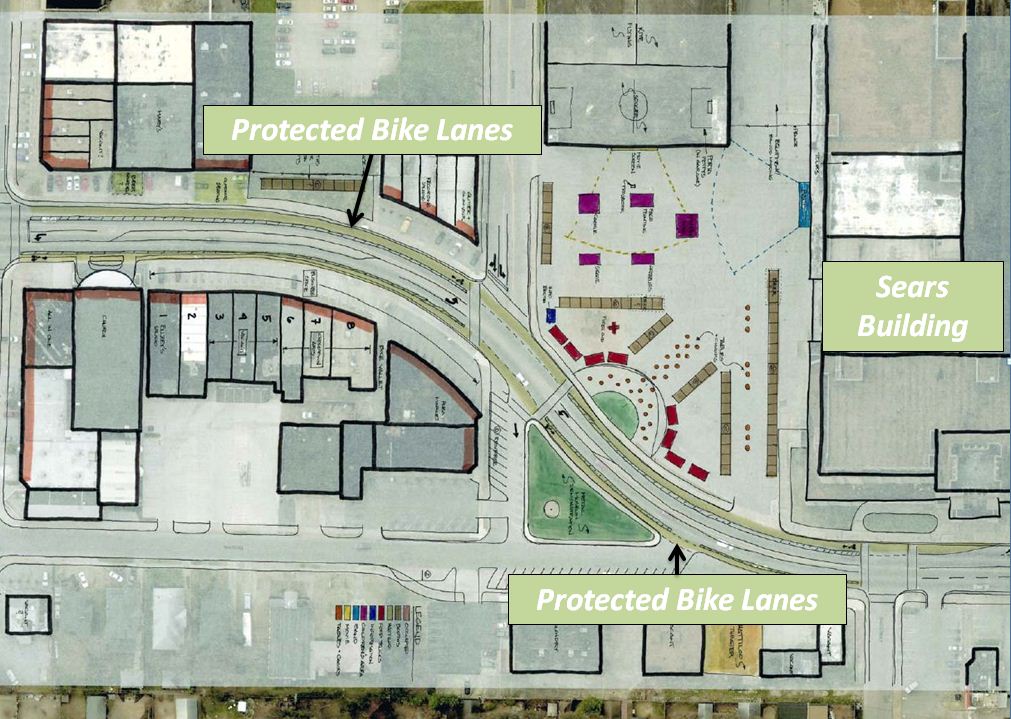 Cleveland and MLK, Jr. Avenue represent two Green Lane Projects that, once connected, will enable people on bikes within Memphis’ urban core to link to the bicycle and pedestrian crossing of the Mississippi River, Overton Park, and the Shelby Farms Greenline. 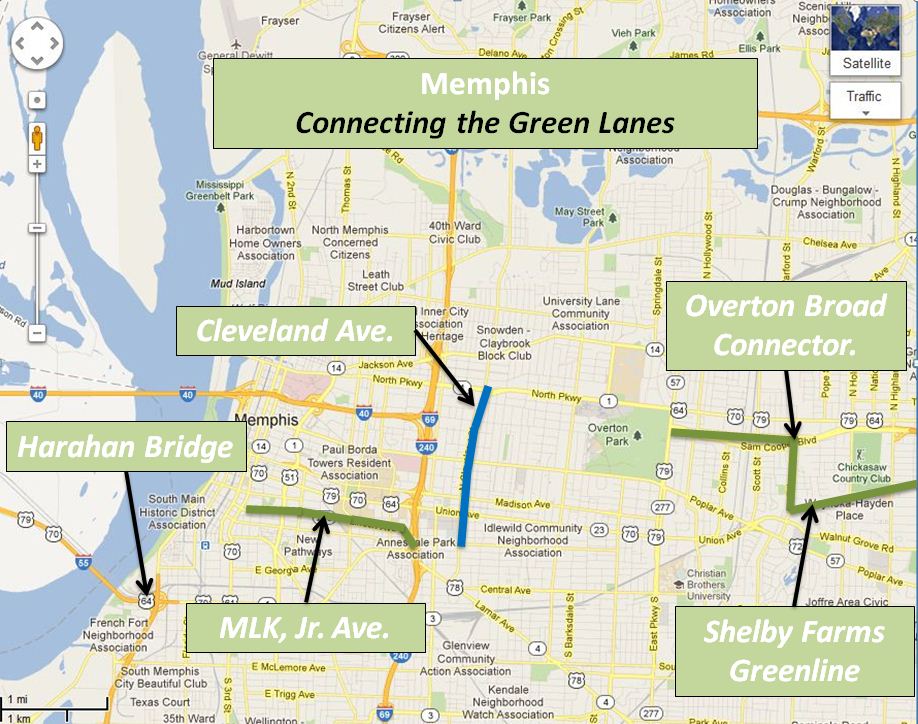 As part of Memphis’ recent TIGER Grant, connections will be made between MLK, Jr. Avenue and the Harahan Bridge.  The existing bike lanes on North Parkway will soon be extend to Overton Park, which has the potential to provide a protected connection from the Shelby Farms Greenline on the east to the Harahan Bridge on the west.

The MEMFIX event at the Sears Crosstown Building and the Green Lane Project are collaborations between Memphis Mayor A C Wharton’s administration and community advocates working to improve Memphis’ city streets and neighborhoods one block at a time.  And while these revitalization efforts include Green Lanes, the MEMFIX event – like the Overton Broad Connector project – attempts to address many of the more pressing challenges our city faces.  Such innovative responses during challenging economic times continue to produce not only a better bike lane, but maybe most importantly, these efforts are producing a better city.