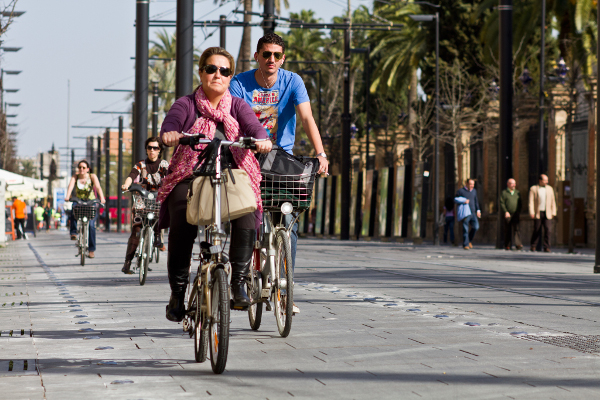 Which is more important to making a city great for biking: the number of high-quality bikeways, or whether they’re connected to each other?

But if you want lots of people biking safely, you eventually need both.

The paper is unique because it draws on a once-in-a-generation opportunity to measure what happens when a big city that has very little biking makes a sudden, massive investment in a biking network. 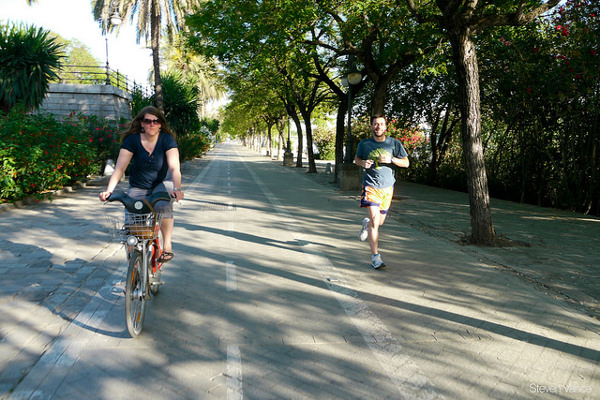 The paper by R. Marqu?s and V. Hern?ndez-Herrador, published this month in the journal Accident Analysis and Prevention, provides one of the first academic studies of one of the largest rapid bike-infrastructure investments in world history.

In 2003, the 2,200-year-old Spanish city of Seville (population 700,000) voted more Communists than usual onto its city council. (Yes, this is a thing that happens in Seville.) The left-wing party had pledged a major investment in bike transportation — and after they joined a coalition with the center-left Socialist party, they delivered. In 2007 alone, the city built 40 miles of protected bike lanes, a 542 percent increase to the existing 7 miles citywide. It created an imperfect but connected network through the central city. 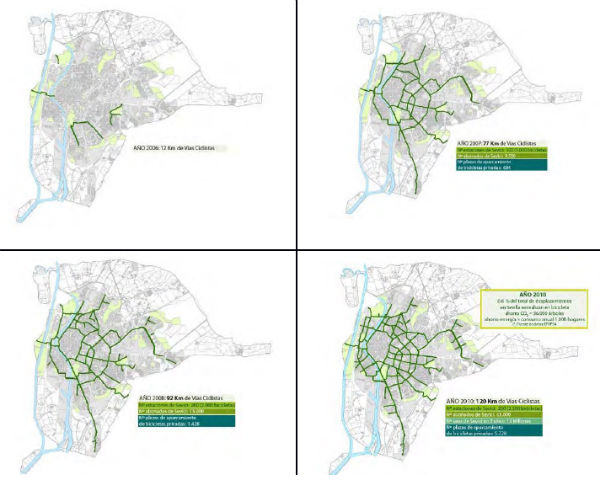 Another 46 miles were installed over the next six years, along with a popular new bike-sharing system. (These six years overlapped, it’s worth noting, with the global financial crisis and a particularly deep recession in Spain — national unemployment peaked at 27 percent in 2013. Seville’s tourism-heavy region, Andalucia, had the worst job market in the country, and the city itself fared only a bit better.)

Two things started happening in Seville almost immediately: the number of bike trips soared and the risk of a bike trip plummeted. 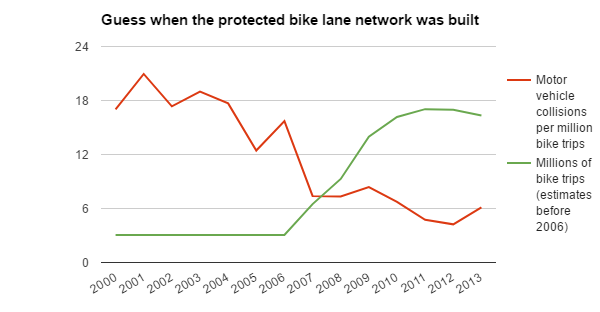 The basic story of Seville’s bike boom has been known for a few years. But in their study, Marqu’s and Hern?ndez-Herrador wanted to know what had happened in what order. 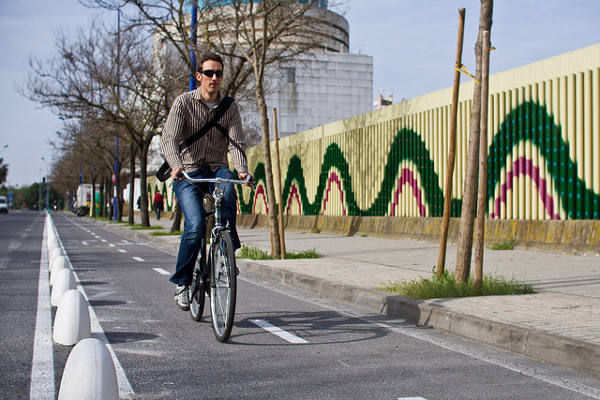 That second item is what made their study most unique. Many cities build low-stress networks gradually. Only Seville had built a large connected network in a single year.

“Since the cycle paths existing before 2007 were few and unconnected, there was a qualitative change between 2006 and 2007,” the authors write.

In other words, Seville gave scientists a chance to test an important question: How much does bike network connectedness matter?

Here’s what they found: bike network connectedness seems to immediately pay off in the form of lower risk to people biking. The risk of a biking trip in Seville seems to have fallen dramatically in 2007 and stayed mostly flat afterward. No other single variable predicted bike safety as well as that single yes/no question: Has a network been built yet?

More accurate still was a formula that took into account both variables 1 and 2: the length of bikeways built and that yes/no question about whether or not the network had been connected.

In other words: Generally speaking, every additional mile of protected bike lane somewhere in the city improved safety. But network connections improved safety most.

The network itself didn’t directly boost ridership — at least, not immediately 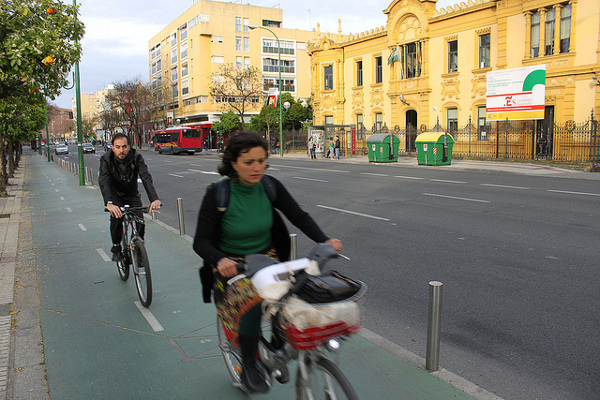 The most surprising finding of Marqu’s and Hern?ndez-Herrador is probably that the network connections didn’t correlate very well to ridership.

Instead of jumping abruptly as soon as the network was in place, the number of people biking in Seville rose steadily.

Here’s what the authors say about this:

It’s worth adding that the authors also believe that even as safety was boosting ridership, ridership was also improving safety. They describe their findings as “an independent numerical confirmation of the theory of ‘safety in numbers,'” proposed by PL Jacobsen: the rising probability of seeing bikes on the road seems to have boosted safety on streets without dedicated bike lanes.

One possibility Marqu’s and Hern?ndez-Herrador don’t explore is that the network did increase ridership directly — but it didn’t do so immediately. It’s plausible that infrastructure-related biking increases are inherently gradual. New bike lanes may lay in wait for their future users to experience a triggering event like a new home, new job, fuel price spike or personal income shock.

No one knows cycling in Sevilla better than Prof. Marqu?s. His data for Sevilla are superb, his statistical analysis right on target, and his conclusions are definitely justified by the data and analysis. This is a very important article because it examines more carefully than any previous academic article the various impacts of expanded and improved cycling facilities over time.

Pucher said the new finding “fully reinforces” his own Feb. 2017 article in the American Journal of Public Health, which used an overview of data from many wealthy countries to conclude that “constructing physically separated, protected cycle tracks and providing key connections within the overall bikeway network are the most effective bikeway investments.”

“Simply racking up total bikeway mileage by putting down stripes for unprotected bike lanes is obviously cheaper,” Pucher said. “But it does not attract nearly as much new cycling.”