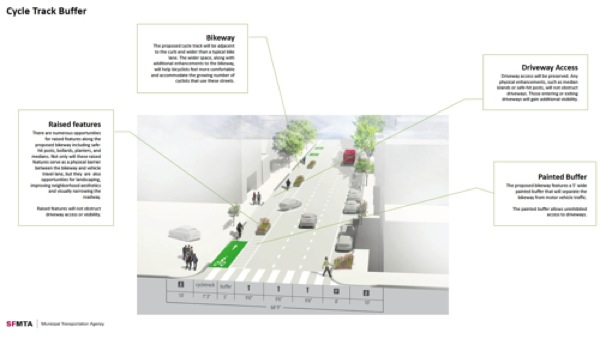 Physically separated green lanes will be introduced on Fell and Oak streets, making the route safer and more inviting for all people who wish to ride a bike. These streets are the flattest and most direct links to the Panhandle bike path and the Wiggle route, which is an extremely popular path despite the high volumes of traffic.

In order to increase safety for all roadway users, and to attract new riders, the green lanes will help add a buffer between those in cars and those on bikes, will improve pedestrian safety by adding high-visibility crosswalks and curb extensions, and will provide new opportunities for plantings.  The proposed green lanes are based on best practices in bikeway design, which has been shown to increase cycling in other American cities. Green markings will be used in the intersections.

Making people on bikes feel safety is essential to attracting new riders, which is necessary to help the city meet its goal of increasing bicycle use to 20% of all trips by 2020.

Panhandle resident and second grade teacher Gillis Kallem voiced her opinion about biking along Fell Street to the San Francisco Bicycle Coalition. The mother of two and her family ride their bikes on Fell Street daily.  ?The worst part of my commute is Fell Street. On Fell, I feel I’m taking my life into my hands. The cars travel very fast and the bikes have very little room. There is the constant threat of being doored, as well. I?d like to feel better about taking my children out on the streets,? Kallem said.

On October 16, the San Francisco Municipal Transportation Agency unanimously approved the Oak and Fell Streets Pedestrian and Bicycle Safety Project, which will include the introduction of ?green lanes? in the neighborhood. The approved improvements along Fell and Oak streets will include a physically separated lane, new traffic signal timing to help reduce speeding and added greenery to enhance the street aesthetic.

The improvements along the three blocks of Fell and Oak streets are crucial because the route is a central link that connects the Panhandle bike lanes to the popular Wiggle bicycle route. According to data from the San Francisco Police Department, the intersection of Oak and Divisadero streets was the second most dangerous in San Francisco for people walking and biking in 2011.

If you are wondering why the project is so important and what changes to expect, we?ve broken down all the information below.

Bike counts on Fell and Oak have increased 79 percent in counts from 2006-2011. The corridor is also one of the busiest East/West routes, connecting the western half of the city to downtown. Currently, there is no bike lane on Oak Street.

?While three blocks may seem small, the impact of these improvements will be huge. These three blocks have long been a troubling gap deterring people from biking or walking comfortably,? Leah Shahum, executive director of the San Francisco Bicycle Coalition, said in a statement.

The changes aim to dramatically increase safety in this busy corridor, making the neighborhood safer for the thousands of those walking, driving and on bikes.

Many people who live in this neighborhood or visit local businesses do not feel safe as they walk along and across these busy streets. In response to many requests from local residents, the SFMTA investigated ways to improve neighborhood livability through pedestrian safety measures, landscaping improvements and measures to calm vehicle traffic, in addition to the bicycle improvements described above.

The final design for the project includes new corner curb extensions, or bulb-outs, which will shorten crossing distances and improve visibility for pedestrians crossing Oak and Fell streets.  In addition, crosswalks will be re-striped as high visibility continental crosswalks.  The curb extensions will also provide additional space for greenery and plantings, improving the aesthetics and livability of Oak and Fell streets.

In a city as dense and compact as San Francisco, parking is a hot button. The design will remove roughly 100 on-street parking spaces on Oak and Fell streets; however, about 45 parking spaces will be added within a few blocks of these streets to lessen the impact.

The proposed mitigation measures include changing parking on neighboring streets and consolidating bus stops. In an effort to calm traffic, thus increasing safety, the proposed design includes implementing angled and perpendicular parking on nearby streets, common parking procedures throughout San Francisco. Back-in angled parking, which provides drivers with a better vision of traffic as they exit a parking space, is proposed on Baker Street between Fell and Oak streets, where there is a higher volume of people on bikes.

To help decrease transit travel time, the SFMTA will remove two bus stops along the 21 Hayes Muni bus line. By reducing bus stops, more on-street parking spaces will be freed up. Bus stops on this stretch of the 21 Hayes are currently located at every intersection, so the removal of stops at the intersections of Hayes and Broderick streets and at Hayes and Scott will increase the distance to access a stop by a maximum of 500 feet, well within Muni standards.

What streets will be affected and when?

Changes will be implemented in the upcoming months along Fell and Oak streets between Scott and Baker streets. Starting in October, the SFMTA began the process of implementation of parking mitigation measures, as well as enhancements to the Fell Street cross walks and bike lane.

Later this year, changes to Oak Street will begin, including crosswalk enhancements, traffic signal timing changes and a new bike lane. By Summer 2013, traffic island barriers will be installed to protect the new green lane. The schedule is subject to change pending unforeseen circumstances, though crews will try not to perform work on the project during rush hours.

For more information, see the SFMTA’s project schedule at http://www.sfmta.com/cms/bproj/OakandFellBikeways.htm.