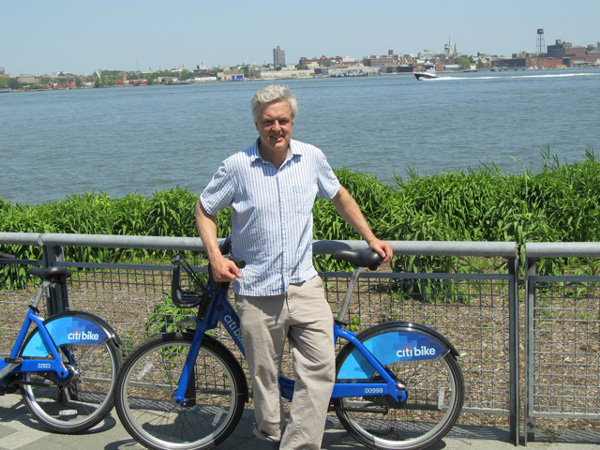 To understand the challenge of getting around New York City?whether by taxi, bus, subway, car or bike?consider:

So New York is crowded, complicated and growing, with more than a million new residents since 1990. 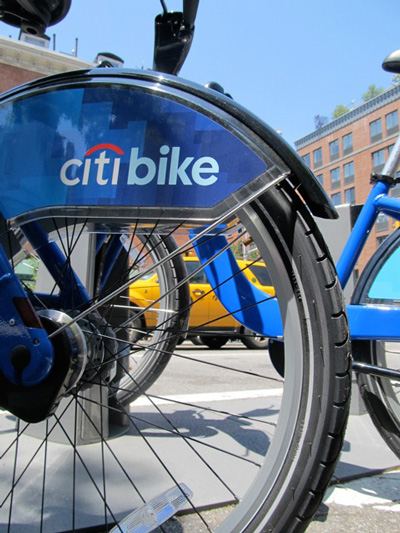 With all these tidbits in mind, my wife and I tried CitiBike, New York’s brand-new bike-sharing system, on its first Saturday, June 1. Three hundred thirty stations have been set around the city. Six thousand short-term rental bikes are already available. If all goes well, this number may rise to 10,000 soon.

We started walking from our midtown hotel to find a CitiBike kiosk, and quickly found one, with several available bikes, a block away. This was a good sign.

The rental process was easy and quick, just as it is with other top-notch systems. Stick an annual membership key ($95) into the kiosk slot (or swipe a credit card), wait for the green light, pull out the bike, adjust the saddle, and go. We were off.

We started riding west toward the Hudson River. As always, lots of delivery trucks were parked on both sides of the street. Add construction zones and the darkness of looming skyscrapers, and we just had to be super-alert and ready to squeeze to let fast-moving taxis pass. This was the only tense time of our three hours in the saddle (on several different bikes).

My guess is that midtown, cross-town, will be a tough riding area for inexperienced riders, seniors and jet-lagged tourists. But once you get east to First and Second Avenues, or west to Eighth and Ninth Avenues, separated, protected bikeways appear. They offer peace of mind, and the experience is made easier by special bike traffic signals. And once you get to either river, the Hudson and East River waterside paths are scenic and glorious. While my guess is that riverside rides won’t be primary routes for CitiBike riders, we were happy to be there?riding blue bikes on a bluebird day. 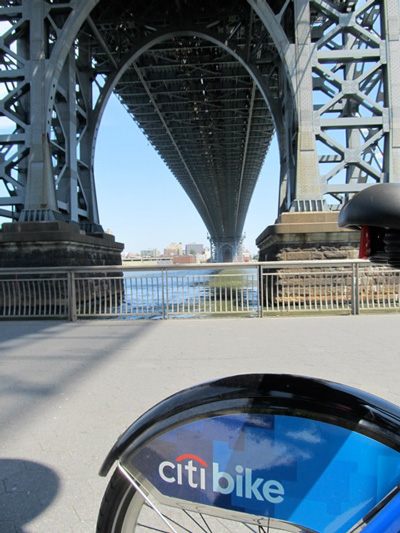 In New York, separated and protected doesn’t mean fully isolated. Gawking tourists wander off the sidewalks into the middle of these lanes. Food vendor pushcarts weave through the forbidden zones, as do delivery vehicles of all sizes. The biggest challenge, I think, is going to be developing better communication and coordination with people on foot. Of course CitiBike is barely a week old, so it’s too early to expect everyone to be in synch.

We saw CitiBike riders everywhere, and just about every one of them sported a smile. It was 90 degrees and humid?a tough day to pedal in the baking sun?but we saw hundreds of riders of all sizes, shapes, ages, and backgrounds.

That’s what New York City wants and needs to improve its transportation system. From our perspective, the best way to describe CitBike’s first week is: so far, so good.