How economic growth sold Portland landlords on a bikeway 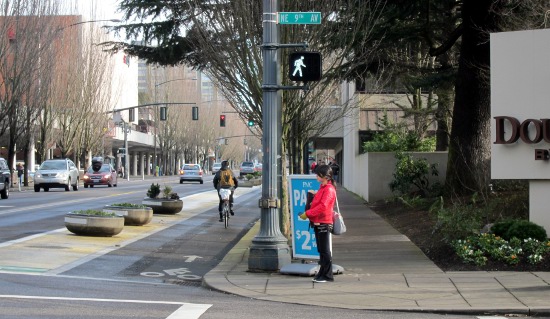 Not long ago, in the dark days of auto-only transportation planning, a property manager that urged the city to eliminate two auto lanes adjacent to its planned 650-apartment complex might have been judged completely insane.

But that’s exactly what just happened here in Portland — and the result is the city’s newest separated bikeway, backed by a coalition of nearby businesses in Portland’s job-rich Lloyd District that, for various reasons, saw green lanes as better for their bottom line than auto lanes.

Some bike advocates were understandably disappointed when the bike lane project beat out a more dramatic proposal to dedicate an entire nearby street to active transportation. But that bad blood has also clouded something important: Two separated, painted bike lanes on Northeast Multnomah Street had just replaced two auto lanes with the full-throated support of neighboring businesses.

“Multnomah was an underutilized street,” said Wade Lange, vice president of property management for Langley Investment Properties, a real estate firm that does big business in the area. “I’d stand out there at 8:10 in the morning and I wouldn’t see a car east or west.” 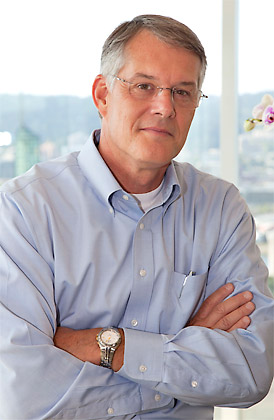 All that empty pavement invited many drivers to hit the gas, blazing through the commercial district at 45 mph or more.

So Lange’s firm, which had blocked bike improvements on nearby Holladay Street as part of its work on a 650-unit apartment proposal and a major new convention center hotel, embraced the green lane plan on Multnomah, one block north.

“It’s about visibility — if you’re driving by at 35 mph in a car, with basically a tree barrier in front of any retail spaces that exist, you’re not going to stop,” said Lange (pictured at right). “But you slow the traffic down, you do the landscaping and you get more people walking on the streets, and suddenly the retail exists.”

For neighboring properties, that’s where the separated bike lanes came in: As a way to build a coalition that would support a traffic-calming project.

“It just becomes a more active street than it ever was before,” Lange said. “A place where pedestrians want to spend their time.”

Today, Lloyd District is a spartan job hub just outside downtown Portland that might as well roll up the sidewalks at 6 p.m. But property owners hope to transform it into a livelier “16-hour district” — active from 7 a.m. to 11 p.m. — anchored by new apartments and street-facing retail storefronts. More pedestrians lingering nearby would bring big financial benefits, property owners said.

“There’s 20,000 employees that work in this district every day,” said Justin Zeulner, a spokesman for the nearby Rose Quarter sports and entertainment complex. “They do walk around, but are they just walking to their car and back?”

Eliminating an auto lane also let the city squeeze about 20 on-street, metered auto parking spaces onto the street, offsetting some that had been removed from the area, increasing public revenue and further preparing for a shift to retail use. Several landowners also expressed enthusiasm about a plan to set up a few commercial food-service patios or public parklets along Multnomah.

Once upon a time, developers might have thought that maximally easy auto access was the No. 1 priority for selling new apartments, even in a central city. But for an apartment-and-retail project that would be Portland’s biggest in years, transforming the neighborhood into a more pleasant place for bikes and pedestrians was more important.

“You start putting in vegetation, you’re making it more like a walking plaza, and the next thing you know you wind up with more of a business district feel,” said Zuelner.

Slowing auto traffic wasn’t the only reason the Multnomah project succeeded. One major landowner along the street is deeply interested in encouraging bicycling among its own workers: health giant Kaiser Permanente, which employs 1,000 largely administrative workers in an office building just south of Multnomah.

“All the literature clearly shows that healthy people perform more effectively,” Mayorga said. “Less sick days. The performance is higher on a day-to-day level. Productivity goes up. There’s definitely a correlation between wellness and business viability.”

Mayorga said Kaiser recently started tracking the commute distances of its workers, and had noticed that employees seemed to be migrating to homes closer to their workplace. Protected bike lanes like Multnomah’s will help workers do what they already seem to want to do, he said.

“My suspicion is that people are just sick of long commutes,” Mayorga said. “We’re creating an environment that’s safer, which will enable people who might not necessarily have been open to trying bike commuting.”

Finally, at the sports complex down the street, there was yet another business incentive for the change: game nights at the home of the NBA’s Portland Trailblazers.

Basketball fans already jam the streets and pack sardinelike into MAX trains 44 nights a year. That’s why, for three years, the Blazers’ property managers have been campaigning to get more of their fans to arrive by bicycle.

That can be a tough sell in Portland’s dark, damp winters. But it’s been working — and Zuelner thinks the newly comfortable Multnomah Street bike lane will help build on the progress since 2010.

With more property to develop and activate in the district, Zuelner said his company has a financial interest in moving humans in and out more efficiently.

“The reality is that we need to figure out multimodal ways to get people in and out of business districts,” Zuelner said. “It’s smart for the city in the long run.”