For Paramount Room, a former Chicago speakeasy reimagined as a “food and drink spot” with craft beers and a chef-driven menu, it was the news that thousands of similar businesses might dread: the city wanted to remove auto parking from both sides of the street out front to make room for new protected bike lanes.

Even for a restaurant on the edge of Chicago’s downtown Loop, two blocks from an L station and facing a street that was already the most popular bike-commuting street in the state, it was a change that’d rattle any restraunteur.

But as Paramount owner Jon Young explains in the 90-second video interview excerpt above, it turned out to be the beginning of a beautiful friendship.

“Around the same time that we realized we would be losing parking, we also realized that there is all this bike traffic, and we do have a lot of cyclists that are regular customers,” Young recalls. “So we kind of tapped their brains a little bit, just throwing out some ideas. How do we turn lemons into lemonade? How do we capitalize on this? How can we offset what potential loss of business we might feel? And really, from that point on, the conversation got exciting. Because we started to notice just how many people bike over here and just how many of our regulars are on bikes. So we thought, let’s just embrace this and think of ways that we can get a great culture going up and down the street.”

As Young explains in our recent video about the spread of protected bike lanes, this was how he realized that the new protected bike lanes on his street weren’t just an inevitable change in the urban neighborhood around him. They were an opportunity. 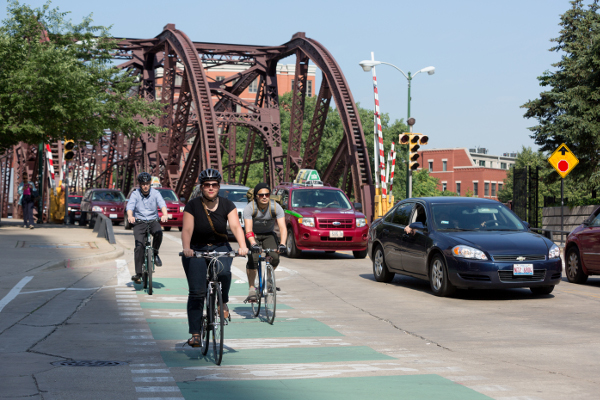 The Kinzie Street bridge into the Loop, a few blocks from Paramount Room.

This post is part of a series of outtakes from our recent video about the rise of protected bike lanes. Interviews by Laura Crawford and Russ Roca.