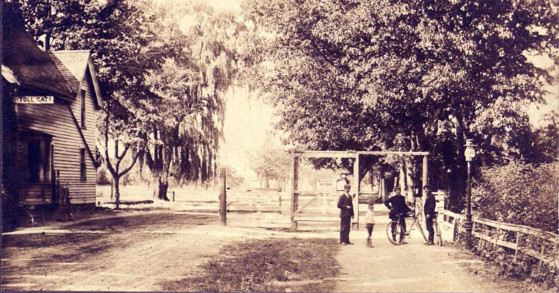 It started in 1898, right at the end of the 1890s “bike boom” that began with the pneumatic tire and ended with the Oldsmobile. But it was different than the “Good Roads” movement you might have heard of, in which bikers allied with farmers to create paved shared routes through the countryside.

No: this was, as University of Wisconsin-La Crosse historian James Longhurst wrote in an academic paper published last October, a “forgotten episode” in which “an alternative vision of the future of American transportation flickered to life, and then faded.”

Before most roads were widened and paved, and before cities required (or assessed) abutters to install concrete sidewalks and curbing, advocates took advantage of the transitional state of the built environment to insert sidepaths into the urban landscape. The proposed paths “shall not be less than three feet or more than six feet wide … and shall be constructed within the outside lines and along and upon either side of such public roads and streets.” While they were to be built within the already-established legal right of way, the sidepaths were segregated from both the adjoining road and from sidewalks: already-existing pedestrian paths were not to be subsumed or inconvenienced. Later court decisions made it clear that wagons, carts, and horses were excluded from the paths. They were to be a separate network, set apart from foot and vehicle traffic, solely for bicycles.

They were, in short, protected bike lanes. 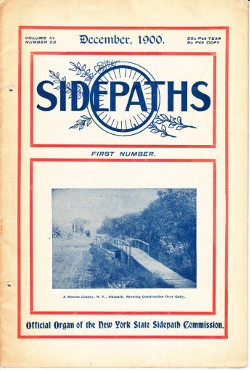 The movement had its own national magazine, “Sidepaths,” with a circulation of 5,000, published in America’s bike capital: Rochester, N.Y. Sidepaths, Longhurst writes, had more success in some cities than in others and “briefly flourished in Chicago, Minneapolis, Portland, and elsewhere.”

The basic problem for sidepaths, Longhurst shows, is that after an initial burst of enthusiasm among bike advocates faded, there wasn’t enough public money in place to build and maintain them.

Charitable fundraising dropped off. Governments resisted taxing the public at large for what was seen as a service for urban elites. User fees, funded by bike licenses, were supported by some bikers but not others.

Where sidepaths were hobbled from the start by a weak and fluctuating funding stream, [historian Christopher] Wells observes that the interstate highway system was successful because of the ingenuity and invisibility of its financing, hiding the cost from end users and protecting it from the depredations of marauding legislators. When it comes to infrastructure, it seems, the funding mechanism is destiny.

‘Had it been successful, a separate sidepath system would have changed American history’ 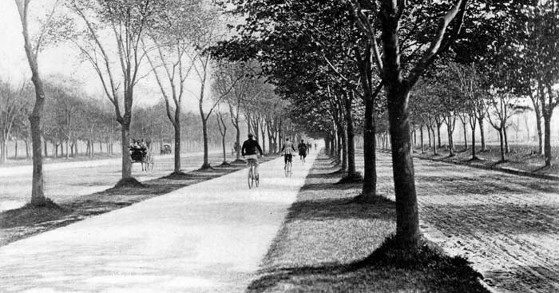 “Had it been successful, a separate sidepath system would have changed American history,” Longhurst writes in his article, which will also inform his upcoming book tentatively titled “Bike Battles.”

If the paths themselves had continued to exist, they might have offered alternative suburban and interurban commuting options throughout the twentieth century. As cities and towns of America expanded, the suburbs would have bloomed along the sidepath networks linking them back to the urban center. The persistence of sidepaths might have provided some American cities with a built-in radial network of bicycle paths throughout the twentieth century — the very network that many are now trying to build or accommodate, with great difficulty, in the twenty-first.