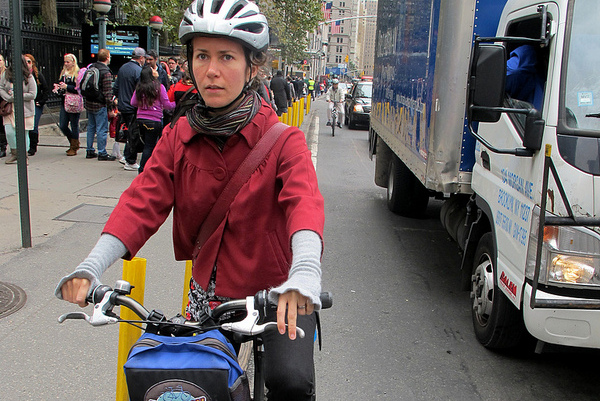 For 10 years, urban policymakers have been talking more and more about the so-called “interested but concerned” — people who would like to bike more but who are, for some reason, held back.

Since then, several local studies have explored the opinions of these people, usually within cities that were already fairly bike-friendly. But since the “interested but concerned” concept was popularized, there’s never been a study of these people at the national level.

Until now, that is. 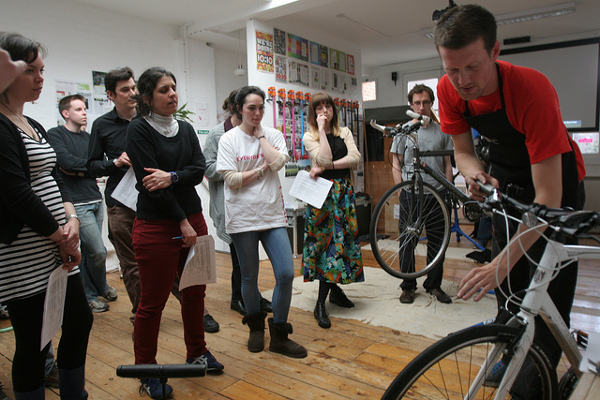 As part of its new national survey about bicycling participation, PeopleForBikes hired a public research firm to anonymously ask thousands of U.S. adults a series of questions. One of them: whether they would like to ride a bicycle more often.

To make sure people weren’t lying to make us happy, we also asked whether they’d ever visited an imaginary website, and then disregarded all answers from people who claimed they had. After that, to ensure a representative sample, we weighted the remaining answers by age, gender, region, ethnicity, and income to make the sample look like the United States.

As we shared here last week, 53 percent of American adults answered that yes, they want to bike more.

But that question also gave us an opportunity to do something else: to look more closely at the situations of the people who answered “yes” to this question. By comparing their answers to different questions, we can explore one of the holy grails of bicycling advocacy: what the most important obstacles to biking might be.

After a week of looking closely at the numbers, here are our six most interesting discoveries.

Among people who would like to ride more, 34 percent disagree with the statement below, 26 percent are neutral and 38 percent agree. 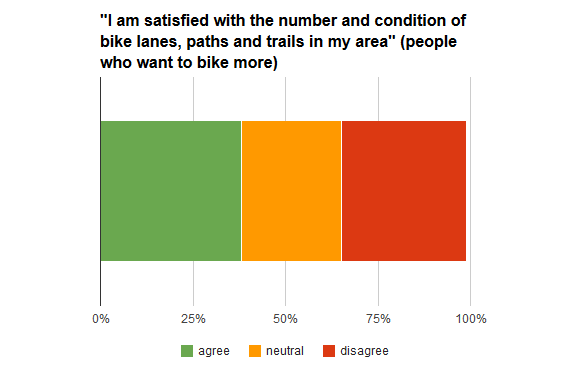 This is actually slightly better than the population at large (31 percent of all adults agree with the statement), which probably reflects the fact that people who like to bike tend to live in bike-friendlier areas. But it still leaves a huge share of adults who disagree — and speaks to the fact that in the United States, we simply haven’t built enough bike-friendly neighborhoods to serve even the people who currently wish they could live in them.

2) Bicycle ownership is a major barrier to riding, especially among poorer households 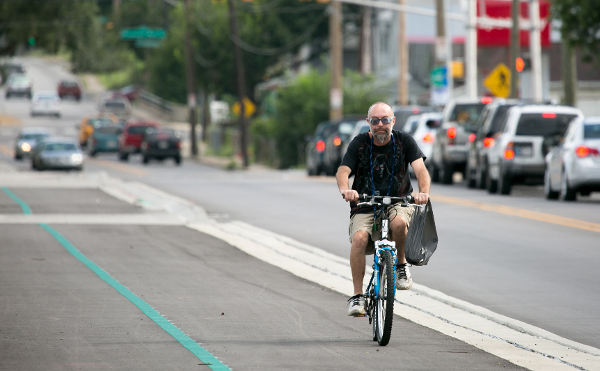 It’s pretty hard to ride a bike regularly if you don’t own one? or, even more frustrating, if your tire went flat or your brake cable snapped and you’ve never gotten around to fixing it.

The good news is that adults who know they want to ride more are about 25 percent likelier than the population at large to have at least one working adult bike in their home. But even among these interested adults, 35 percent still have no bike. This problem is dramatically higher for low-income families: 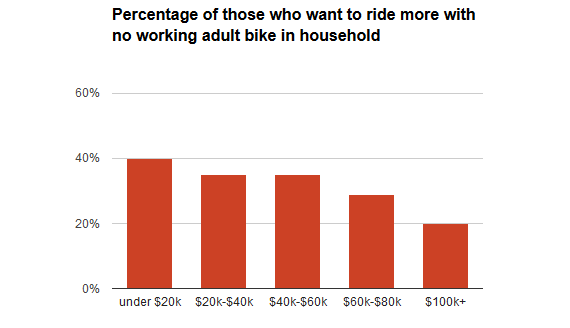 This is actually a powerful argument for (among other things) affordable, accessible bike sharing. Because bike-share systems essentially pool bike purchase and maintenance costs among many different people, they can be even cheaper than bike ownership as a way to get around. 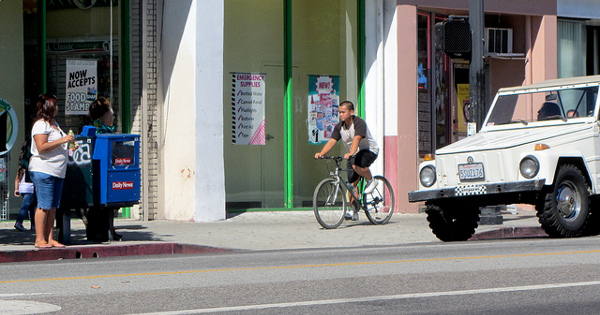 Traffic collisions aren’t the only physical threat that keeps people off bicycles. Depending on what you look like and where you live, you might be biking less than you’d like because you’re afraid of being targeted by a criminal — or maybe, sad to say, by law enforcement. On average, 41 percent of people who want to bike more feel agree with the statement below, but there’s a lot of variation by race — more than the variation by gender, region or income. 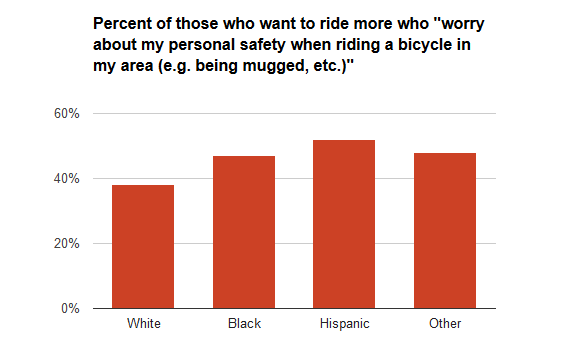 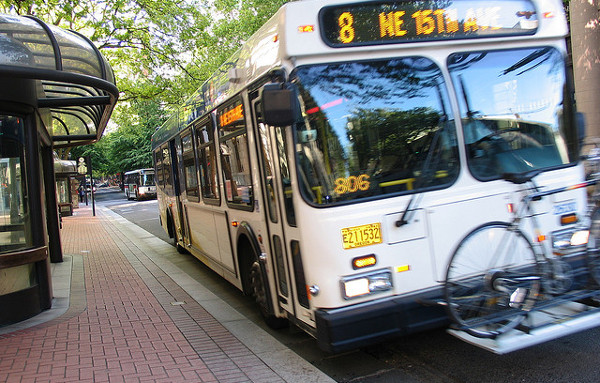 But to do that, you’ve got to be able to ride your bike to the rail station, load it onto a bus rack, park it securely while you’re away and so on. Our survey found that 35 percent of U.S. adults disagree with the statement below, compared to 26 percent who are neutral and 38 perent who agree. Intriguingly, the answer to this question varies widely by region. “Interested but concerned” bikers in the western United States are far more likely to be satisfied with bike-transit integration. Cities and transit agencies east of the Great Plains should look to Asia and Europe for ideas, but they can also look west. 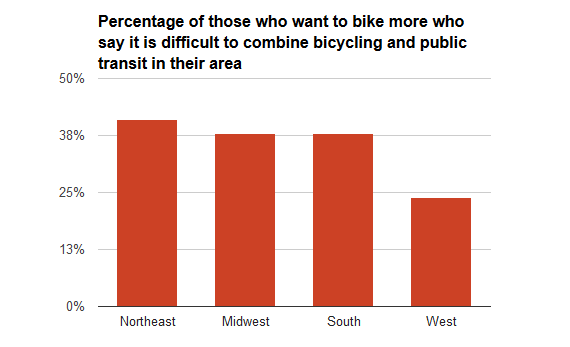 5) Every group worries a lot about getting hit by cars, but some more than others 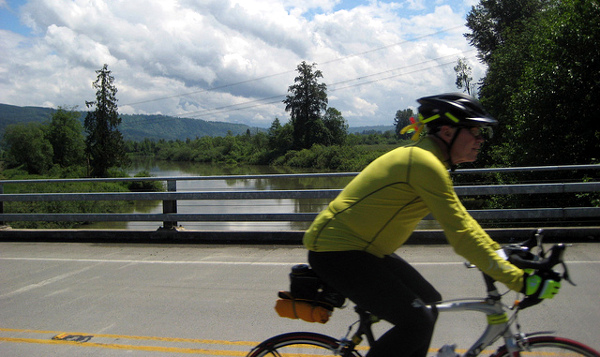 There wasn’t much divide on this issue among men and women or among people of different incomes. There was a bigger difference by race and ethnicity. Black adults were the least likely to agree with this statement (though still 57 percent) and Hispanic adults the most likely (a whopping 66 percent).

This brings us to our final observation… 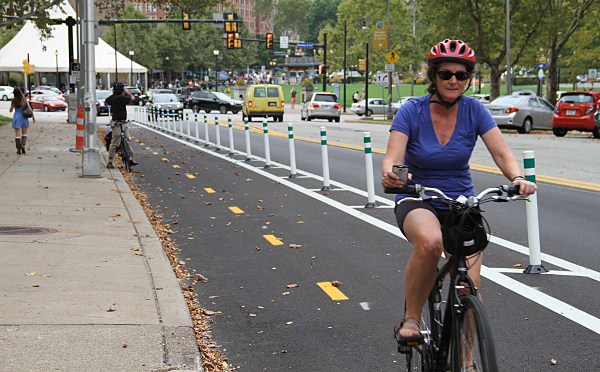 Not much ambiguity here. 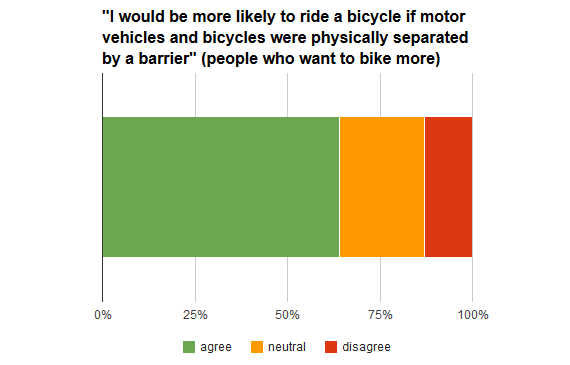 Compared to 46 percent of the general population, an overwhelming 64 percent of people who would like to bike more say that protected bike lanes would make a difference to their transportation choices. Of this “interested but concerned” group — which, to reiterate, consists of half the U.S. adult population — only 13 percent disagreed with the statement above.

As with the other questions, we broke this finding out by gender, region, income and race to look for trends within the data. We found exactly one trend: everyone feels more or less the same way. 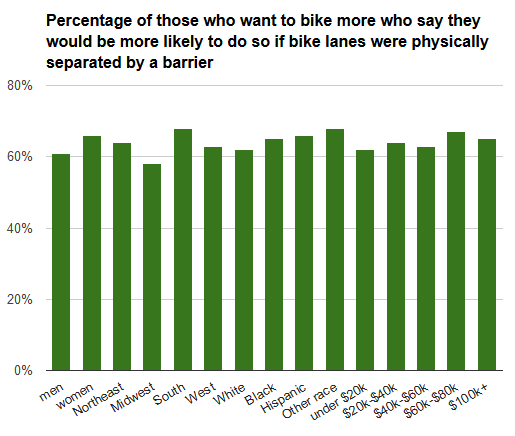 And that’s all we have to say about that.