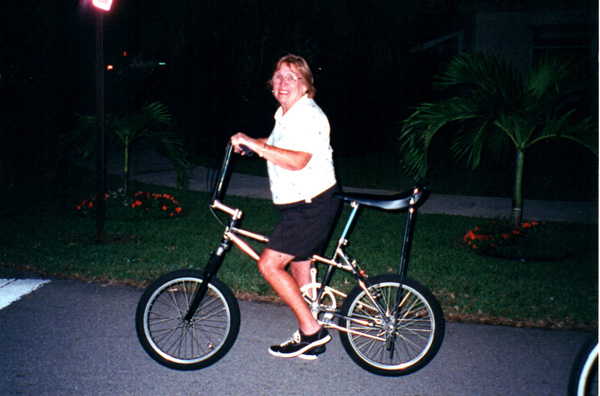 In honor of all the amazing stories coming from people sharing tales of their first bikes, I thought I’d share my own. Except, the bike I remember most isn’t the first one I was given. It’s the first bike I gave away – to my 73-year-old grandmother.

But I’m getting ahead of myself.

I spent every childhood Christmas at my grandmother’s house in South Florida. You might know where she lives, because there’s a pretty good chance your grandparents live there, too. Or at least, that’s the first thing people mention when I tell them I grew up in Florida.

Christmas in Florida was just like all those holiday episodes on television, except completely the opposite. Each year, as December rolled by and tank top weather slowly gave way to t-shirt weather, I could count on the three rules of Christmas in South Florida:

1. Christmas trees come from a box in the attic.

2. Snow lives in spray cans, as does the pine scent necessary to create an authentic fake-tree experience.

3. Whenever I’d outgrown my bike, Grandma would find a way to surprise me with a new one.

It wasn’t until adulthood that I learned Christmas trees grow out of the ground already pine scented and real snow doesn’t always accumulate on windows to form the word “SALE!”

Back then, Grandma would borrow my bike so we could ride around and look at Christmas lights together (“Ooh! Isn’t that lighted-flamingo lovely!”). Flash forward a decade and change, and on a visit home, I realized that the grandmother who’d given me so many bikes didn’t have one of her own.

My husband and I went to work searching for just the right steed. We finally decided on a fold-up bike that could fit in the closet of her condo. As I “wrapped” it with excitement, I wondered if her hands always shook with anticipation and if she retied her bow over and over like I did.

Wiping the sweat from my forehead, I rang the doorbell and waited for the wreathed door to open. When my Grandma’s figure appeared in the doorway, her eyes met mine with the same loving look that had greeted me for decades. She cocked her head as she saw the little blue bike with the big yellow bow, then her hand shot to her mouth and her eyes moistened.

We untied the bow and adjusted the seat while Grandma reminisced about the bikes she had as a kid – hand-me-downs from her older brothers. “But this bike…” she paused and looked down at the tiny wheels, “…this is the first bike I’ve been given as a gift.”

That afternoon, we rode around her 55-and-over community, waving to the man on the tricycle. When I popped a wheelie, my Grandma – the same woman who tells me to wear a jacket if the temperature drops below 70 – yanked up on her handlebars enough to give me a heart attack (and get her front wheel an inch off the ground).

A few months later, she put in a request for a basket to carry her towel and Discman. “Like the one Dorothy had in The Wizard of Oz,” she described. Her trips around the neighborhood had grown to include the five-mile ride to the beach.

As the years went on, the aches and pains of growing older became more noticeable – and, you know, she got that shoulder injury jet skiing –
and the bike stayed in the closet more and more.

One day, she called me on the phone and told me about a friend of a friend who needed a bike and couldn’t afford one. Her tone was guilty when she asked, “Is it okay if I give the bike away?”

That’s Grandma for you. Long after her grandkids have grown, she still finds ways to tie a bow on a bike in hopes of helping someone else get to where they want to go.

“I wouldn’t have it any other way, Grandma.”

Do you have a story about your favorite time giving a bike? Share it below!