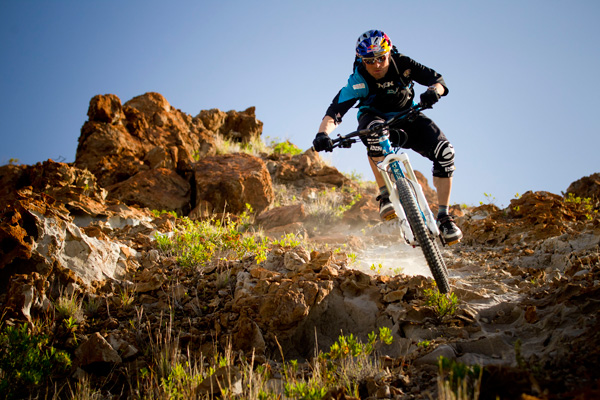 Setting a goal, like riding a trail or road that you’ve been wanting to ride, can help you overcome the fear of failure.

I?m afraid of my bad back and my knees that whimper on long rides. I?m afraid having kids will mean the end to my selfish indulgences on the bike. I?m afraid that I get in the way of myself and who I want to be. Above all else, I am afraid of failure.

Well, that and karaoke.

A few years ago?before becoming a mom?I was burned out. I lived in Boulder, Colorado, and had been off the bike longer than I cared to admit. Wheezing and struggling up a small hill, I knew I needed a change.

And by change, I meant something to jolt me back into the saddle and propel me toward a fitter self. That’s when I decided to enter the Santa Cruz Hellride?a wheeled torture-fest that pit four men and four women against each other on 65-miles of extremely technical Downieville, California singletrack. Did I mention the 14,000 feet of climbing thrown in for masochistic kicks and sadistic giggles?

I knew that if really wanted to do this ride, I would have to actually start riding. Some people even suggested training, however that conflicted with my personal belief that training sucks. Instead, I created two rules: Never drive anywhere you can bike and never turn down a ride.

The miles racked up and my burnout faded into memory. Fears of being lost or getting stranded were replaced by an overwhelming desire to explore. Two weeks before the race, I filled my pack to the gills with water, food, and tools. With no map on hand or route in mind, I threw a leg over my fender-and-rack-laden singlespeed and began pedaling.

I wasn’t as strong as I thought I should be, and even with my rules, I knew I hadn?t ridden as much as I could have. I turned up a canyon and felt my blood course through my veins. Sweat poured from my hands. There was no way I?d make it very far. Not on this bike. Not with these legs.

I kept pedaling, and when I couldn?t pedal, I pushed. I climbed until I reached snow in July. Looking down to the valleys below, I watched my fears collapse like dominos. Nine hours later, I rolled through the door with 100 miles under my wheels, and 8000 feet of climbing under my legs. This was my first century. I finally knew I was ready to take on the Hellride.

The next day, I saw an extra line appear on a pregnancy test?the extra line that says, ?Buckle up kiddo, this rollercoaster only starts off slow.? In that moment, everything changed. After talking with doctors, I decided to do the ride, but I knew I wouldn?t go fast. I wouldn?t ride hard. I wouldn?t finish. I wouldn?t even complete the first lap.

I would fail epically. And I would embrace it. My goal, after all, wasn’t to win the Hellride. It was to get in shape. Besides, the most important part of a goal isn’t achieving it, but working toward an outcome. And, as you and I know, that outcome is never guaranteed.

I was the first one to quit the race, and I did it with a smile. When I thought my adventure in fear and failure was over, I heard the announcer utter words that shook me to the core: ?Karaoke is mandatory for all participants.?

And because I was pregnant, I would have to do it sober. Shudder.

When my turn came, the teleprompter displayed the key of the song. Mine may as well have said, ?Key of kittens on fire,? as I began to absolutely destroy Sweet Home Alabama. You know that look people get when they’re embarrassed for you? Well, I do.

No matter. I was stronger at the end of the day than I was at the beginning?in so many ways. That’s what setting a goal does. It helped me face my worst fears and accept my failure with grace.

In other words, it was one of the biggest achievements of my life.

This is the video that Kristin (aka The Butcher) made to qualify for the Hellride.