I spent a week in Munich this winter on vacation.* I’ve been fortunate to have my passport stamped often in the Netherlands and Denmark during the past four years as part of my work with PeopleForBikes.org and the Green Lane Project, but this was my first visit to the Bavarian capital.

Unlike the agenda-dense professional study tours I usually lead, this visit was pure tourism; no wall-to-wall days full of meetings with the city’s transportation planners and detailed bicycle infrastructure tours. My Munich time was spent casually wandering with no specific destinations and a luxuriously unpopulated schedule to observe the city in action. Conditions were snowy, icy and wet; about as unappealing for bicycling as they could be. Yet despite the weather, the signs of a city where people have the freedom to ride bikes were everywhere. 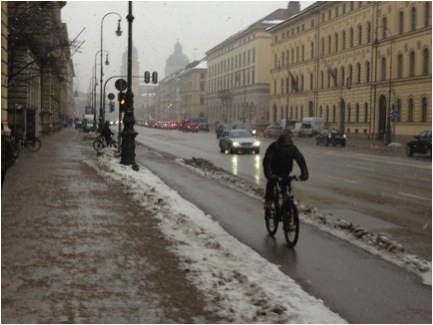 Looking to other places for inspiration and a glimpse of a possible future is a critical part of the path to better bicycling in U.S. cities. That’s why it’s a big focus of the Green Lane Project. The best Dutch and Danish cities have been working diligently to make bicycling safe, appealing and convenient for about 50 years, but Munich’s dedication to bicycle transportation really took hold in the 1990s.

The German city’s bicycle infrastructure is not yet world-class, but it’s more advanced than anything yet achieved in North America. In 1990, the percentage of trips made by bike in Munich was about 5% (comparable to today’s best U.S. cities, though some neighborhoods have much higher use). Today in Munich, bikes make up more than 15% of all traffic, a remarkably rapid transformation.

The rise of bike use during the last two decades was no fluke ?focused public and private investments in infrastructure, thoughtful policy decisions, and economic, social and legal incentives made it possible. Like in the U.S., these changes weren’t driven by the passion of select individuals, but by rational decision-makers seeking practical and cost-effective urban transportation. And like American cities, Munich’s traffic professionals struggled with design challenges and cultural inertia while adapting proven practices from other places to their unique streets.

The parallels are strong between Munich’s bicycling growth during the 2000s and the current trajectory of U.S. cities. 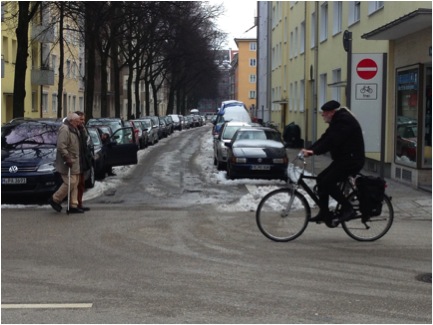 Home to the headquarters of BMW and 1.3 million residents, Munich is no quaint medieval village or anti-car enclave. It has diverse neighborhoods, generously proportioned parking lots, and wide roads. Cars are the dominant mode of transportation. It’s not exactly a clone of a U.S. city, but if you squint your eyes on an average downtown street, you could imagine being in Washington D.C., Boston or Seattle. The exception is that you’ll also see a robust network of low-stress bikeways connecting the city. 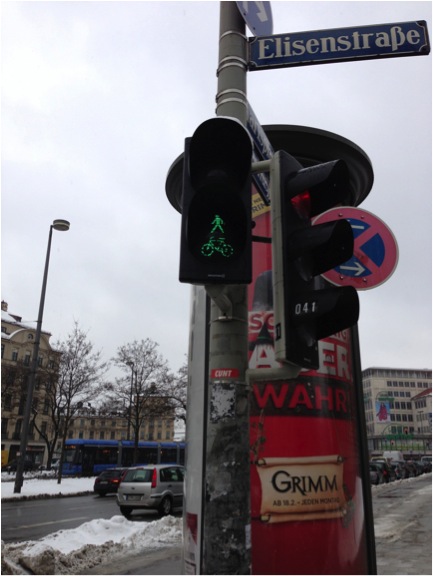 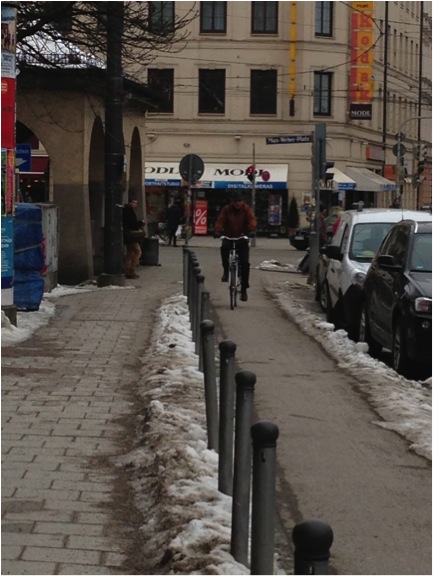 Munich’s infrastructure toolbox consists of the familiar three basic ingredients: protected bike lanes (what we like to call green lanes), quiet, neighborhood streets and off-street bike paths. It forms a far from perfect network ? evidence of earlier failed design iterations that had since been improved were easy to spot — and that’s reassuring for practitioners in the U.S. The rate of progress with American green lanes has been tremendous in the past few years, and what took 20 years to achieve in Munich could happen in 10 on our side of the Atlantic with the right mix of political support, smart design and modest investments.

*Actually, it was my honeymoon. And yes, more than half of the photos I took were of bicycle infrastructure. I can’t help myself.

**See this video for an explanation of Dutch-style intersections.