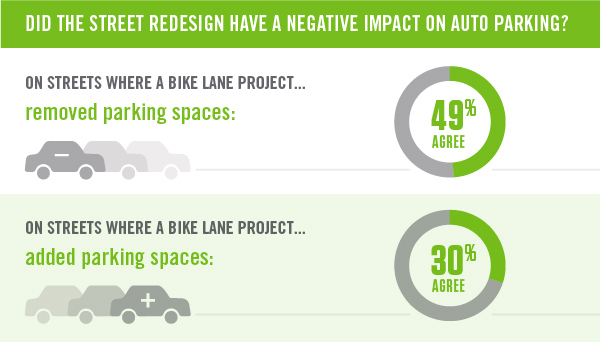 Fifth in a series.

All this week, we’ve been unpacking the nuances of the first major study of protected bike lanes in the United States. Today, we’re wrapping things up by taking a moment for maybe the most amusing finding in the 179-page report:

Even when a protected bike lane project creates on-street parking spaces where none existed before, 30 percent of nearby residents think the project made parking worse.

The project in question was Multnomah Street in Portland, where the city removed one travel lane in each direction in order to add buffers for the bike lanes and, at some midblock locations, 21 new parking spaces. Of 492 nearby residents who returned surveys about the project, 30 percent said that the changes had made it harder to park on the street.

At projects that actually removed parking spaces in order to add protected bike lanes, 49 percent of residents said they made it harder to park.

Could it be that when people who oppose bike projects complain about the loss of on-street parking, this issue is often not actually their primary concern?

As scientists sometimes say, the answer to this question is left as an exercise for the reader.