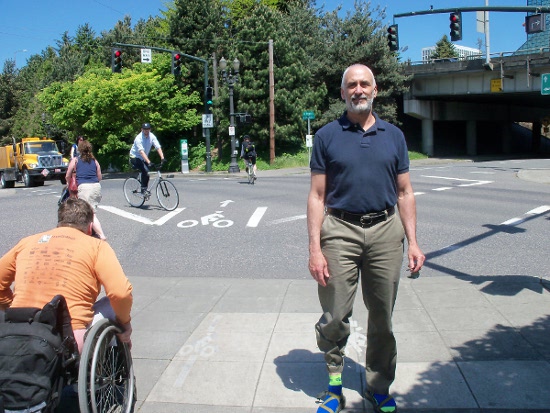 If anyone in the United States understands how big-city policies can support biking, it’s Roger Geller. In 12 years as Portland’s bicycle coordinator, he’s overseen a 250 percent spike in bike commuting and helped the city top countless bike-lovers’ lists.

Geller could probably make more money elsewhere — he brings home about $80,000 — but from his Portland perch, this multidisciplinary bike bureaucrat has been able to shape the national cycling debate with influential concepts like his “four types of bicyclists” while having a big influence on his city’s creative bike infrastructure and programming.

I caught Geller at a Portland coffee shop to talk about how to create a bureaucracy that understands bicycles, the roots of “bike backlash” and why he’s in favor of voluntary bicyclist certification.

It’s struck me that Portland has lots of advantages in building its bike ridership, but one of them is a consciously progressive city government. You and your colleagues are more willing than in other cities, in my impression, to stick your necks out and be an ideologically active organization. Do you agree or disagree?

No, I don’t think so. I think the first thing you said is right on: It’s the politicians and the people who have made decisions about what’s important. Political support is everything.

I think Ted Buehler identified three things in his thesis at UC Davis: you need political support, you need a strong advocacy, you need an empowered bureaucracy. And I think we’ve had all three for a while. But it really begins with political support, because without that you don’t get the green light to try things, you don’t get the funding to build things. I don’t think we’re any more willing here. I think we just had the opportunity to work to make things better.

What does an empowered bureaucracy consist of?

I think it’s just that we have the support of the politicians. They back us up. They say, “Try to make this happen, and if you fail, we’ve got your back.” So we’re given the opportunity to expand our skills and knowledge, mostly because it’s consistent with our policies. We have to figure out how to achieve our policy goals. And we’re clearly not there yet. 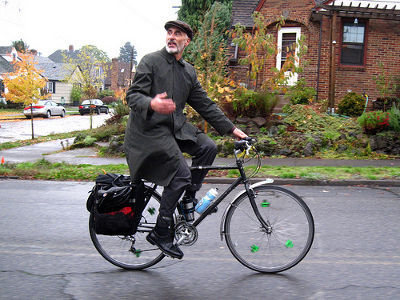 If you had advice for other bureaucrats in fostering a culture in which they are empowered, what would it be?

I think you always have to tell the truth. It’s probably good not to get too far out over your skis. It’s always important to understand where the politicians are coming from, that they have a lot of other strengths as well.

But I think the way you get that trust is that the politicians really have to want what you’re doing.

Portland has advanced tremendously under (Mayor) Sam Adams, because it was clear what his priorities were. The message from his office came down that safety, bicycling and walking would be key priorities for him.

If you were summarizing where Portland needs to improve bicycle infrastructure, where would it be?

The big challenge for any city is to create protected bikeways on big commercial streets. So we reflected that in the Portland bike plan. I think that Portland has really created some tremendously impressive cycletrack facilities, but they’re just little pockets. We have to create more any way we can.

The other day I did a two-hour bike count at 122nd and Division. It was between 70 and 100 bikes, and 64 percent of those that were bicycling did so on a sidewalk. Those people want cycletracks! That’s why they were on the sidewalk.

How much does bicycle engineering need to be reinvented city-by-city?

There’s a lot of shared elements, but I think different cities have different strengths. New York City’s got these really wide avenues. They can take four 12-foot travel lanes, and turn that into four 10-foot travel lanes and have an 8-foot space for bikes without really changing a whole lot.

One of Portland’s strengths is our street grid, which allows a lot of greenways. Every city needs to build to their strengths.

What’s the state of “bike backlash” in Portland?

I expected there to be bike backlash. People think we are spending so much money on bicycling. Part of it is that there’s green stuff at intersections and there’s white stuff on the street and there’s little signals with bike symbols on them. There’s just a lot of bike stuff around, and there’s not a lot of cycletracks. But people see the bike stuff and they say, wow, you’re spending so much money on bikes. And the media flames that, and there’s a sense of a competition for resources. “My potholes are not being fixed. My children are not being adequately schooled because you’re doing bike boxes.”

Of course, the reality is that we’re spending only a small fraction of our transportation dollars on bicycling.

I also think motorists get genuinely upset about what appears to be a lack of consideration and courtesy by some cyclists. I don’t care if you don’t stop at a stop sign, but don’t be discourteous. My rule is I come to a legal stop if there’s anybody else at the intersection. I stop, I put my foot down, it’s very clear. Motorists look at cyclists and think, what are you going to do now? And it makes them nervous.

You’ve heard about the four E’s of cycling, the traditional four things you need to create good conditions for cycling? There’s engineering, which is what everybody focuses on. But there’s also encouragement, education and enforcement. Encouragement is Sunday Parkways. Education is Safe Routes to School.

Which of those four things is the hardest to sell the public on?

I’m not for licensing bicyclists by the Oregon Department of Transportation, because that would present a barrier to increased bicycling, but I’m for people getting a certificate because they participated in a comprehensive transportation class in their formative years. In the Netherlands, they do that at age 12. You need to train people at the age of first use. For driving that’s at 16. For bicycling you need to begin training people at age 9 or 10.

All photos courtesy Geller, who tweets now and then as why_not_bikes.