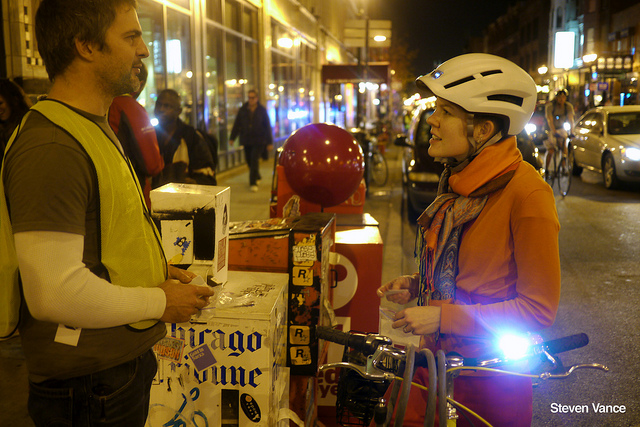 Third in a series about local bike media.

Dense, flat and beautifully laced by a connected street grid, Chicago might be the U.S. city with the most to gain from better bike infrastructure. Its bike media, by contrast, are strong, diverse and well-developed. Here are our favorite active sites and feeds about biking in Chi-town.

Community: The Chainlink
Chicago’s first-rate web forum about bikes is one of the nation’s best in part because it’s also the definitive bike-events site. Offers pretty great Facebook and Twitter feeds, too.

Multimodal thinking: Transitized
A policy-oriented blog about “modern urban transportation” — that is to say, foot, bike and transit — by Shaun Jacobsen, a 22-year-old office worker with both a degree and a yen for urban planning. See also Twitter and Facebook.

Active advocacy: Active Trans
Chicago’s bike-and-walk advocacy group is one of the country’s most sophisticated. Their news blog includes regular calls to action and Twitter and Facebook include news about social rides, too. 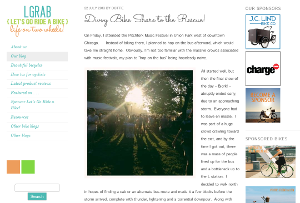 Our favorite of Chicago’s many bike-lifestyle sites is mostly photos with bits of commentary. Their Facebook is similarly upbeat inspiration, while Twitter includes quite a bit of news and advocacy.

Laws and crashes: The Chicago Bike Advocate
A crash and law-oriented site by bike lawyer Brendan Kevenides with an impressive news focus. Kevenides is big on Twitter, too.

Voice from the tower: Jon Hilkevitch
The Chicago Tribune’s longtime transportation reporter mostly covers public transit (and publishes in the Trib’s “automotive” section) but he also dips into bike stuff. His Twitter feed, where he shares his own links and little else, is particularly useful.

All-purpose directory: BikeChicago.info
Though a bit out-of-date, this online “information booth” does a simple job very well: it sorts a bunch of Chicago bike links into useful categories.

Hyperlocal model: Bike Uptown
A world-class example of a neighborhood planning site, it shares information on redesigning the 46th Ward, on Chicago’s inner north side, for humans.

Microblogging done right: @DearbornBikeLn
Not to be outdone by San Franciscans, downtown Chicago’s two-way separated cycle track has its own Twitter feed.

Honorable mention: specialized sites
The largest of the Green Lane Project’s focus cities, Chicago is rich with topical and personal bike sites that don’t cover transportation policy much but are great for bike lovers to know. Some of the best include Ding Ding Let’s Ride, focused on biking while female or biking with kids; the cleverly named (but not as topical as it sounds) Chicargobike; Bike Fancy, whose occasional posts are about two-wheeled fashion; George the Cyclist, a personal site by a longtime bike touring expert; and Chicago Bike Racing, which totally owns its niche.

As in any city, of course, Chicago’s dead bike blogs could fill a graveyard. Now, if only we could figure out how to issue them all ballots…

You can follow any of the Twitter users mentioned here, plus a few more, using our new curated list: Chicago bike tweeps. Did we miss anybody or get anything wrong? Get in touch! Also see our lists from Austin and San Francisco.