As Chicago seeks to implement grand plans for 100 miles of green lanes by 2015, a grant from the Green Lane Project is enabling the Active Transportation Alliance’s Neighborhood Bikeways Campaign to conduct valuable public outreach that is helping to keep Chicago’s plans moving forward.

Chicago is a city of neighborhoods, with each of the city’s 50 aldermen wielding significant control over decisions that affect their ward, including streets. While Mayor Rahm Emanuel and transportation commissioner Gabe Klein have demonstrated their commitment to green lanes, the support of local aldermen (and their communities) plays a major role in whether grand plans become a reality. That’s why local outreach and public support across the city is critical to creating a network of bikeways that cross ward boundaries and connect neighborhoods.

Active Trans? has been meeting with aldermen to help them better understand the benefits of green lanes and discuss opportunities in their neighborhoods. So far, 15 aldermen have signed an Active Trans statement of support for 100 miles of green lanes.

Alderman James Cappleman (46th Ward) sums it up nicely, ?With 40% of the people in our ward not owning cars, bicycling must be promoted as a safe, viable transportation option. Protected bike lanes are the key to achieving this objective.?

Support from constituents and key stakeholders can also help an alderman support what might otherwise be viewed as a politically risky project. Active Trans is reaching community stakeholders through informational community presentations and meetings as well as celebratory events that get the alderman and the community riding together on new green lanes to experience the benefits first-hand. At the same time, Active Trans is working to organize supporters in each ward, both online and on the ground, in order to build a vocal constituency.

On Milwaukee Avenue, where the city is planning a bikeway improvement project, Active Trans helped a group of supportive business owners begin the conversation with community members by organizing the first meeting between the city and their neighboring businesses. Active Trans has since canvassed more than 50 businesses along the street with information about bikeways, started hosting Bike Pit Stops along the street to recruit supporters, and recruited nearly 2,500 people to sign a petition supporting green lanes on Milwaukee. 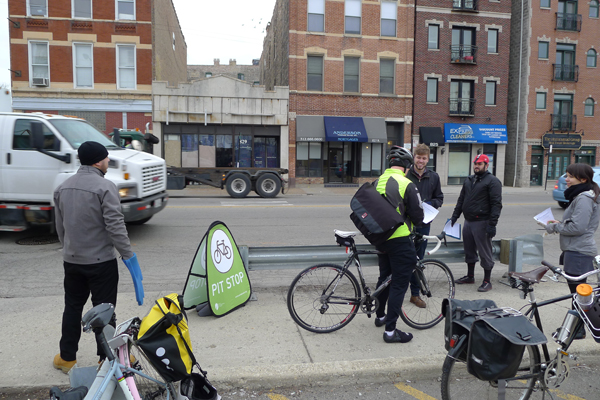 In other neighborhoods, Active Trans is assisting residents with organizing Transportation Advisory Committees, which work independently or with their alderman’s office to identify and move forward transportation-related priorities in their neighborhoods, including bikeways. Several committees have a unique opportunity this year, as four aldermen will use “Participatory Budgeting” to give residents the chance to vote on how to spend $4 million in local infrastructure funding. Residents in each ward formed committees to create proposals for projects that will be put on a community ballot. This strategy was particularly effective in 2010 and 2011 in the 49th Ward when residents voted to fund bike lanes on six major roads. 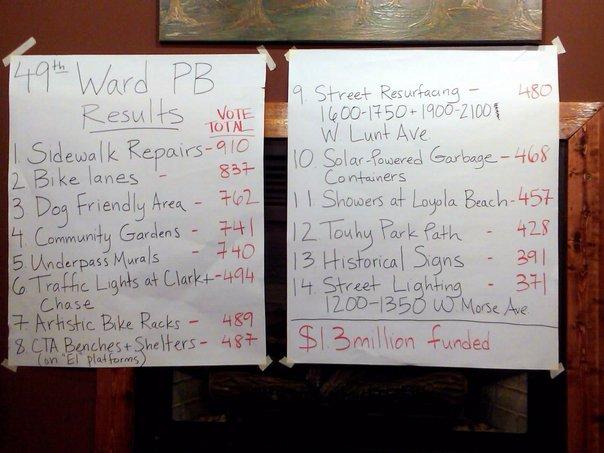 Besides encouraging supporters to participate in that process, Active Trans has served on the city-wide steering committee guiding the process and provided assistance with identifying projects and connecting to city resources and staff in order to strengthen the residents? proposals. Now projects like green lanes in Jefferson Park and a Neighborhood Greenway in Uptown will go on the ballot in May. The next step is getting out the vote.

The exciting thing about public outreach is that Chicagoans already want safer street for bicycling — we just need to explain to communities how green lanes can meet their needs and how they can tap into the city’s plans and resources to improve their streets!