Boxed in by politics, Portland tries a splash of color 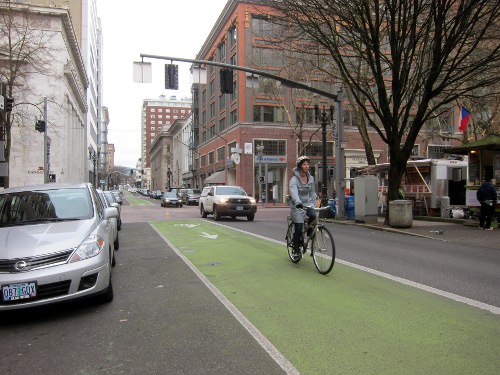 When protected bike lanes compete for space with commercial auto access, even Portlanders sometimes balk. That’s why the city is trying a new tool to make bikers feel safe: paint.

Two half-mile stripes of it, down the middle of two extra-wide bike lanes.

Colored pavement is not hip in the world of bike infrastructure. It separates, but can’t protect; it requests, but can’t enforce. Last year, a Portland study even found that green bike boxes may actually make intersections more dangerous. The core principle of the Green Lane Project is that without physical obstacles to separate bikes from cars, biking simply can’t be pleasant for everyone.

But Geller says his results are showing that although the two stripes of color now running through Portland’s downtown — literal green lanes — aren’t perfect, they work better than detractors might expect.

The painted green lanes on Southwest Oak and Stark streets are actually the second recent redesign of the two one-way 30-foot-wide commercial streets through downtown. In 2009, the city removed one lane of auto traffic from each to leave two car parking lanes, a 10-foot-wide auto lane and a six-foot bike lane with two-foot buffers on each side.

It was a lot of new space for people on bikes — their safest east-west route through downtown Portland. But cars kept encroaching.

“Part of it was just the width,” Geller recalled this week. “It just looked still too much like a general-purpose travel lane. There was not enough of a visual cue for them to say that that was a bike lane.”

So Geller started looking for a better way to separate the modes. Retailers on the street didn’t want to lose auto parking, so physical barriers were difficult. Using the parking lane as a barrier was out, because the fire department said moving cars to the middle of the street would prevent engines from setting up outriggers in an emergency.

So Geller started thinking about a more dramatic way to mark the pavement. He hadn’t yet found an affordable solution, but he realized there was a serious case to be made for color.

“Changes to the roadway are not just about traffic operations,” Geller wrote last summer in his three-page project proposal. Painted green lanes “capture people’s imagination. They are clear. They strongly communicate design intent. They send a message. They become a focus of conversation.”

Next, Geller and his colleagues started looking for a product that would work for Portland’s situation: durable enough to withstand regular but not constant auto traffic; low-cost enough to be applied to tens of thousands of square feet; and skid-resistant enough to keep bike tires from losing control during the city’s wet winters.

After what Geller cheerfully calls a “very scientific analysis, which basically consisted of pouring buckets of water over these stripes of paint and getting on our bikes and trying to skid across it,” the team settled on Hotline-brand traffic marking paint from Sherman-Williams with a skid-resistant additive. Cost: $16,700 for about a mile’s worth of paint, not counting the cost to pay a team of city workers to apply the paint to the six-foot lanes by hand over several days.

It all came out much cheaper than the $5 to $8 per square foot, including labor, required to install the durable Flint-brand thermoplastic that Portland uses for most of its other road coloring. Paint also cost much less than epoxy acrylic with aggregate, which Geller said would have been his choice for the project if he’d had a bigger budget.

Three months after installation, Geller is keeping an eye on the green paint for signs of wear.

“Even if you’re not driving on top of a surface, you’re going to get a lot of small particulate, a lot of dirt, a lot of rubber,” Geller said. But the underlying color is holding up so far. Based on performance of the same paint in Long Beach, Calif., Geller expects the lanes to last about 18 months before they’ll need a new coat.

A related worry: though the city has received no complaints this winter about slipperiness, each successive layer of paint is likely to make the lane smoother and more skid-prone. Six years from now, Stark and Oak may need a solution other than paint.

For now, Geller says he sees less of a problem from cars blocking the distinctive green lane. Next summer’s bicycle counts along the corridor will show whether painting the lanes has successfully increased bike traffic on the street.

“Where you have downtown-traffic-like conditions, most people ideally want to have some sort of physical separation from cars,” Geller said. “We couldn’t do that on Stark and Oak, so we did the next best thing.”