Here’s the thing about bike sharing systems like Citi Bike in New York, Capital Bikeshare in Washington and Nice Ride in the Twin Cities: they’re like rolling petri dishes for the sort of people who don’t want to go everywhere on a bicycle, but still want to weave bike transportation into their lives, because it’s such a convenient way to move around a city.

Last month, a pair of scholars who study biking looked carefully at those petri dishes. They observed 4,316 people riding bikes past 98 locations in lower and midtown Manhattan. What they found was fascinating:

We’ve written before that protected bike lanes and public bikesharing are the peanut butter and chocolate of better biking: they’re both low-cost investments in local transportation that each help the other one pay off.

Bikesharing solves the problem of not having a bike handy, especially when you’re traveling in another city or running errands midday. Protected bike lanes solve the problem of not having a pleasant route to ride by more fully separating bikes from auto traffic when possible. Together, both tools help people get on the streets with their bikes whenever riding a bike makes sense.

As with biking in general, the point isn’t to replace cars. The point is to make it easier for more people to use the right tool for the right job — and to realize that very often, the right tool has two wheels. 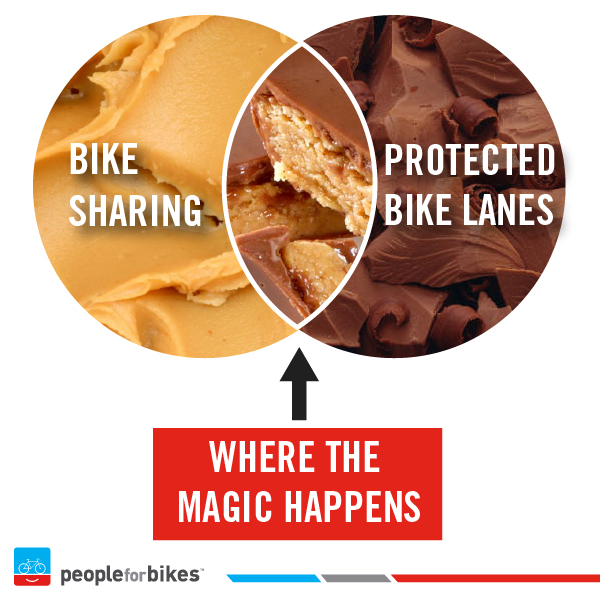