Bike lanes in black and white

Rev. Kenneth Gunn’s ministry at Chicago’s Bread of Life Church encompasses both the Bible and bicycles. He organized a bike club that regularly rides from the South Side church to Lake Michigan and along the Lakefront Trail. In his spare time, Gunn repairs donated bikes that he gives to kids in the predominantly African-American neighborhood.

Rev. Gunn believes biking offers great benefits to the community. ?Besides good recreation, biking is economical,? the 70-year-old minister explains, especially in a city where many people don’t own cars and transit fares are rising. ?But health is the number one reason to ride a bike. It’s good for your coronary, your respiratory and your blood pressure. And I find it’s good for my arthritis.?

Gunn welcomes the new protected bike lanes popping up across Chicago’s South Side as a way to encourage more African-Americans to bike. ?The city is becoming more and more bike friendly. The new lanes on 55th Street are super-safe and I love it.?

While African-Americans comprise the fastest growing demographic of bicyclists, doubling from 2001 and 2009 according to U.S. Department of Transportation data, bike lanes proposed for African-American neighborhoods in several cities have drawn controversy. And black churches like Rev. Gunn?s, which are highly influential among African-Americans, find themselves in the middle of the debate.

A few miles from the Bread of Life Church, a protected bike lane was planned for Martin Luther King Drive, which would pass six African-American churches. This raised serious concerns from some church leaders about the availability of parking for events, as well as aesthetic concerns on this historic street.

This controversy, and ones like it in Portland, Oregon and other cities, highlights the importance of community engagement in planning new and innovative bike projects. ?The city was doing a lot of bike projects fast, and talking with the community was not always a priority,? said Chicago Alderman Pat Dowell, who represents residents in the historically African-American neighborhoods around King Drive.

In a presentation at the Summit on Bike Lanes & Equity, a diverse gathering of transportation leaders convened last May in Austin by the PeopleForBikes Green Lane Project, Dowell pointed to that experience as one reason some African-Americans are skeptical about bike lanes.

Dialogue between the Chicago Department of Transportation (CDOT) and church and community leaders led to modifications in the plan. The protected bike lanes were shifted to a nearby street, and buffered bike lanes (which use wide swaths of paint rather than physical dividers to organize bikes and cars) were added to King Drive.

?The churches still have access to parking for church events.? Dowell said. ?I think it marks a shift in how the city approaches neighbors.? Community discussions around the project also led to the creation of the Bronzeville Bikes group to encourage more people to bike in this predominately African-American neighborhood.

Dowell counts herself as a bike advocate and sponsors a number of community rides in her Ward, but notes that many of her constituents raise concerns about spending money on bike lanes when their neighborhoods are plagued by poverty and crime. 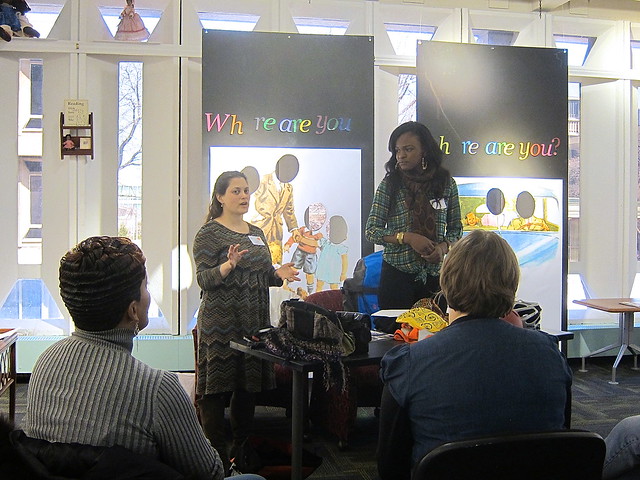 Some residents even associate highly visible street changes, like bike lanes, with the displacement of long-time black residents in favor of younger, often white newcomers. ?You hear that bike lanes are white lanes,? says Cynthia Bell, an African-American organizer with Chicago’s Active Transportation Alliance. ?But there are a lot more youth on bikes in my neighborhood these days, so you hear it less.?

In Memphis, Tennessee a community development corporation founded by the St. Thomas African Methodist Episcopal (A.M.E.) Church was a key player in building bike lanes in the South Memphis neighborhood. More than a thousand community members were involved in the planning process, which was part of a broader revitalization effort. St. Thomas’s pastor Rev. Kenneth Robinson, a medical doctor who formerly was Tennessee’s health commissioner, is a strong advocate for creating more opportunities for physical activity in low-income neighborhoods.

But Adrian Lipscomb, a bicycle project coordinator for the city of Austin, Texas who is writing a Ph.D dissertation on African-Americans and biking, says there are still widespread feelings that bike lanes are the opening act of gentrification. One woman in the historically African-American neighborhood of East Austin told her, ?When the bikes came in, the blacks went out.? However, Census data shows the white population in the neighborhood increased only one percentage point between 2000 and 2009, while the Latino population climbed 8 percent.

(The numbers of latinos biking in the United States rose 50 percent between 2000 and 2009, compared to 22 percent for whites. Whites and Latinos now bike at the same level on overall trips but slightly more latinos commute to work by bike, according to Census figures. Native Americans bike the most of all racial groups.)

A bike user on Southeast Hawthorne Boulevard in Portland. Photo by Zachary Kaufman.

The racial dynamics of bike lanes also flared up in a traditionally African-American neighborhood in Portland that is seeing an influx of younger white people. Long-time residents raised the issue of bike lanes fueling gentrification two years ago at a public meeting about a protected bike lane project for North Williams Street. ?The bike community was surprised at the reaction to the project,? recalls Michelle DePass, a bicyclist and African-American leader, who notes that there was little attention paid to improving traffic safety in the neighborhood when it was predominantly African- American. (Nationally, African Americans suffer a bike fatality rate 30 percent higher than for whites, according to the Centers for Disease Control; for latinos it is 23 percent higher.)

The controversy is not really about bike lanes, reported the Portland Mercury newspaper. ?The public process on Williams is a hot vent for a community that’s been grieving city-imposed change and loss for 60 years,? referring to a freeway project and hospital expansion in the 1950s and ?60s that ripped apart the community.

Planning for the North Williams project was put on hold for several months as further research and community forums were conducted and more people of color added to the project’s Stakeholder Advisory Committee. Though the conversations were sometimes painful and emotionally charged, a new plan was enacted 18 months later with full community support. The plan included improvements for people on bikes as well as public art that recognizes the neighborhood’s history as Portland’s African-American hub.

Gerik Kransky, advocacy director of Portland’s Bicycle Transportation Alliance, says ?This is where we learned to cool our jets and listen. It will inform how we work in the future. We need engagement, not just outreach.?

A protected bike lane in Chicago.

Martha Roskowski, Director of the Green Lane Project, describes how demographic changes are affecting perceptions about biking and gentrification. After decades of population decline, many cities are now seeing a boom fueled by entrepreneurial industries and young well-educated workers seeking a compact urban lifestyle, which includes safe places to bike. As Chicago Mayor Rahm Emanuel declared, ?You cannot be for a start-up, high-tech economy and not be pro-bike.?

?Bike lanes are not driving the wave of gentrification,? Roskowski observed at the Equity Summit. ?It’s a much broader economic and social trend. But much of the process of change is behind the scenes, as properties are bought and sold and new businesses open and new people move into an area. Then, when there’s a public meeting about bike lanes, people feel they finally have a chance to say something about the many changes in their neighborhood.? 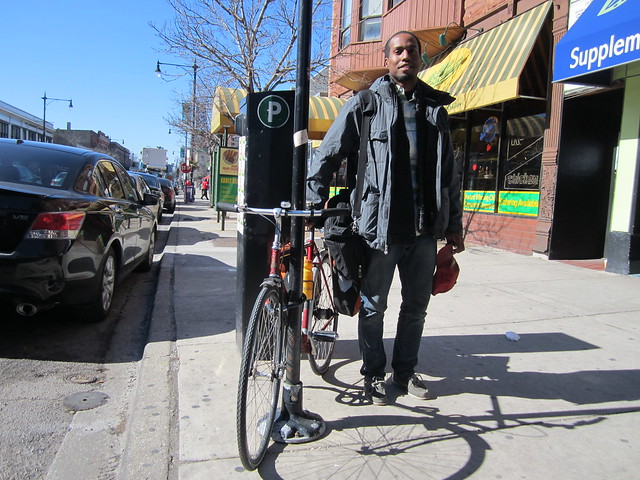 At the Bike Lanes & Equity Summit in Austin, participants from multiple cities identified a number of common themes to create better bike lanes and better neighborhoods, especially in low-income and minority communities:

1) It’s important to involve local community leaders and residents early and often in the process, listening carefully and responding appropriately. As Chicago Alderman Pat Dowell emphasized, ?The majority of the work with bike lanes is community engagement.?

2) Project planners need to understand and be respectful of an area’s history, especially if there is a history of underinvestment or a perception of injustice. Outreach efforts should be tailored to the particular conditions of an area, rather than taking a one-size-fits-all approach. You need to go to the people and speak their language.

3) Everybody wants safer streets and better neighborhoods. Figuring out how to further those goals is an essential part of any bike project. As much as possible, link bike infrastructure to other community improvements such as safe sidewalks and crosswalks, traffic calming, street lighting, waste removal, crime prevention and economic development. As Dowell noted, ?If you can tie bike lanes to a community seeking more economic opportunity– that’s powerful.?

4) Recognize the pivotal role that churches and other social institutions play in neighborhoods, especially communities of color. ?In all six cities, we?ve found black churches are hubs of their communities and are very central to these issues,? said Roskowski.

5) Community-led education campaigns help overcome some people of color’s unease and unfamiliarity about biking. Veronica Davis from Washington D.C. told the story of how she was biking to meet a friend for a movie when an African-American child proclaimed, ?Mommy, mommy there’s a black woman on a bike!? That was the genesis of Black Women Bike, an organization that conducts workshops on the ABCs of getting around on two wheels–how to buy a bike, how to ride at night and in the winter, how to find the best routes on DC’s busy streets. ?Our mission is to get women of color more comfortable with biking, to identify their fears and help alleviate them.?

6) It’s crucial to address the status issues associated with biking. Eboni Hawkins, co-founder of Chicago’s chapter of the national advocacy organization Red, Bike & Green that sponsors community rides and other events to promote biking, noted,  ?The automobile has long been marketed as a symbol of independence and wealth. For a group of people that has been systematically disenfranchised, this is an important socio-cultural marker. So we?ve distilled the idea of riding stylishly into one phrase: ?Ride Fly?.  When we post photos on social media of people like Alicia Keys, Beyonce Knowles, LeBron James, Al Sharpton and Serena Williams on bikes, our comments, shares and likes go through the roof.?