Bike corrals in Hoboken: delayed but not deterred 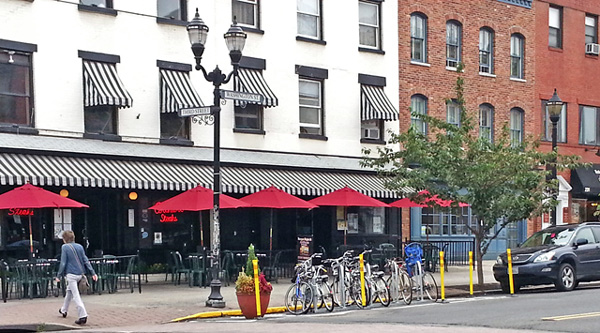 Last year at this time, if you heard Hoboken, New Jersey mentioned in conversation, the last thing you thought of was bike parking. Hurricane Sandy was ravaging the east coast and Hoboken was the poster child for the damages inflicted. Streets were flooded, people were without electricity, and the Mayor Dawn Zimmer called in the National Guard to help evacuate residents.

Oh, what a difference a year makes.

Bicycle parking might not seem like the highest priority for a recovering city and indeed, for several months last year the Department of Transportation and Parking rightly directed their attention elsewhere. But in a city as dense as Hoboken, with significant numbers utilizing the downtown Terminal Station every day, city planners have to maximize their use of public space. “We have tripled the amount of bike parking downtown since 2009, but the new racks fill up almost immediately,” said Ryan Sharp, Principal Planner with the City of Hoboken.  “Where we don’t have racks, people hitch their bikes to just about anything that looks secure. Adding more bike parking increases the likelihood more people will ride bikes, but it’s a challenge to find sidewalk space for bike racks in a very dense, urban city like Hoboken. To me, that’s a problem we can help solve with bike corrals.”

Bike corrals are collections of racks that hold 4-12 bikes and are usually installed on a right-of-way or repurposed parking spot. Portland has 100 of them (of course) and other cities like Minneapolis, Pittsburgh, New York, Chicago, and Milwaukee are adding them because of their bang for the parking buck. Hoboken added a corral with capacity for 30 bicycles close to the Hoboken Terminal Station in June and less than a week later it was full every day. 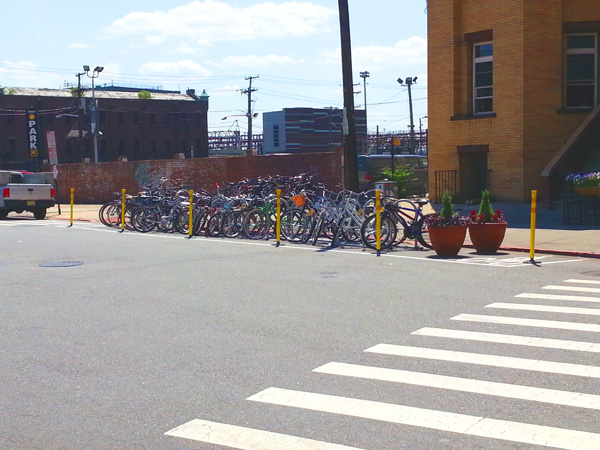 Today the City of Hoboken has fully moved ahead with their pilot project for partnering with local businesses to install bike corrals, a program funded with one of our grants last year. Through the pilot, a business can request a bike corral at its location and sign a basic maintenance agreement for it. The City uses grant funds to help cover equipment and installation costs. They have partnered with area businesses to install six corrals in four locations and are looking at ways to continue the program after grant funds are spent. And for the icing on the cake, the City of Hoboken received the top award for Complete Streets Excellence in New Jersey from the New Jersey Department of Transportation, Rutgers University, and the Federal Highway Administration earlier this month, partially because of the bike corral program.

How’s that for a recovery?