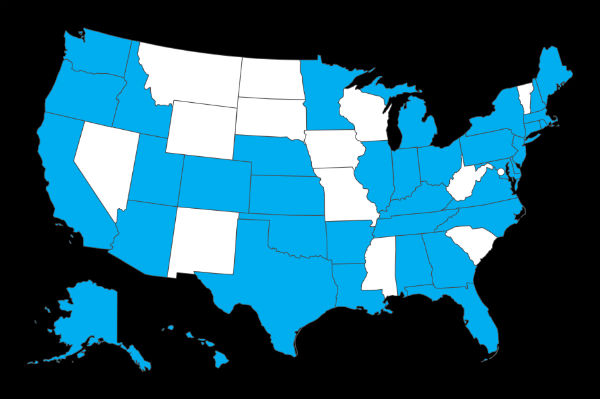 Big Jump applications were submitted by all the states shown in blue (above).

Dozens of cities and counties in 37 states, including Alaska and Hawaii, are in the running to join PeopleForBikes’ next cohort of cutting-edge biking communities.

In all, we received 80 applications before the October 28th deadline. During the next three months, we’ll choose 10 of those communities to lead the nation in a three-year mission: fully connecting the all-ages biking networks in particular neighborhoods and measuring what happens next.

We want the communities we choose to be as diverse as this nation, so we’re looking for communities of different shapes and sizes. Of the applicants,

This application was modeled on our successful Green Lane Project of the last five years, which focused specifically on cities that were piloting protected bike lanes. One of the things we learned from that project was that the actual process of applying is one of the most powerful forces for change, because it gives public officials a time to think carefully and ambitiously about what’s possible in their cities.

In other words, the existence of the list above already represents a significant accomplishment for biking by these 80 cities.

The 10 winners will be publicly announced in January — but that won’t be the end of the line for the other 70 or for the rest of the United States. Instead, we hope it’ll be the beginning of a nationwide focus on finally connecting the all-ages biking networks that can make our communities significantly better for millions of people. Stay tuned.