How the ?Bikelash? Quieted Down in New York and Other Cities 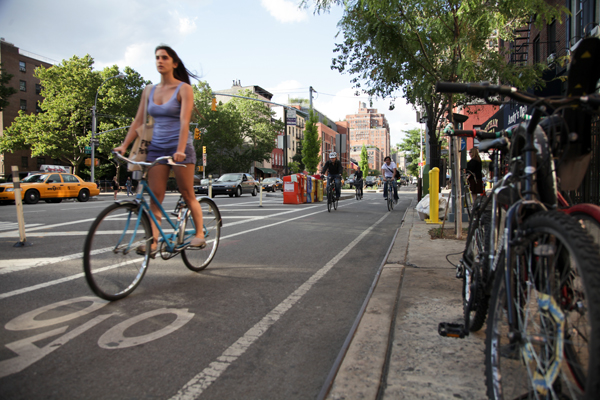 Former New York mayor Ed Koch envisioned bicycles as vehicles for the future, and in 1980 created experimental bike lanes on 6th and 7th Avenues in Manhattan where riders were protected from speeding traffic by asphalt barriers. It was unlike anything most Americans had ever seen–and some people roared their disapproval. Within weeks, the bike lanes were gone.

Twenty-seven years later New York mayor Michael Bloomberg and his transportation commissioner Janette Sadik-Khan saw the growing ranks of bicyclists on the streets as a key component of 21st Century transportation, and began building protected bike lanes in Manhattan and Brooklyn. They had studied the success of similar projects in Copenhagen and the Netherlands, noting how to make projects more efficient and aesthetically pleasing.

These ?green lanes? and pedestrian plazas were an immediate hit but ignited a noisy reaction from a small group of well-connected people unhappy about projects in their neighborhoods, including Bloomberg’s former transportation commissioner. Lawsuits were filed while New York Post and Daily News columnists thundered about the inconvenience to motorists and supposed dangers to pedestrians. New York magazine declared the situation a ?Bikelash? on its cover.

Pressure mounted on Bloomberg to sack Sadik-Khan and rip out the green lanes. Anthony Weiner, then a Queens Congressman and mayoral hopeful, told Bloomberg he would spend his first year as mayor attending ?a bunch of ribbon cuttings tearing out your [expletive] bike lanes.? Bicyclists everywhere braced themselves for a setback, which would once again slow progress toward safer streets in New York and around the continent.

Two-thirds of New Yorkers call bike lanes a good idea in the most recent New York Times poll, compared to only 27 percent who oppose them. All of the major candidates to replace Bloomberg as mayor expressed support for bicycling at a recent forum, notes Paul Steely White, executive director of the local group Transportation Alternatives.

?Bike lanes are the new normal in New York,? White adds. ?People in East Harlem are saying we want bike lanes like those in other parts of town.? 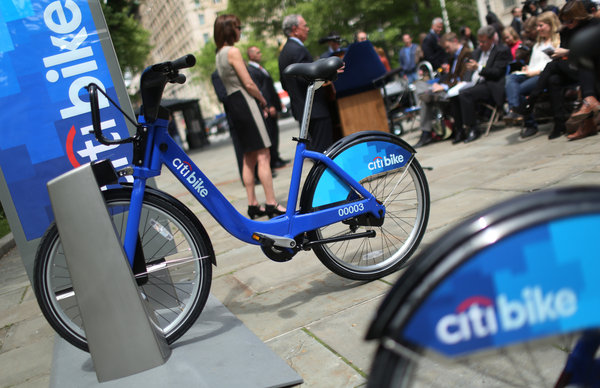 Another of Bloomberg’s and Sadik-Khan’s big ideas to improve New York has now hit the streets: the Citi Bike bike sharing system, the largest in North America with 6000 bikes available at 330 stations in Manhattan and Brooklyn.

What rallied the public around bicycling? ?It was a combination of things,? reports Ben Fried, who chronicled the debate as editor of Streetsblog, a web magazine covering transportation in New York. First, independent polls debunked the myth that New Yorkers disliked bike lanes. ?Actually a strong majority from throughout the city supported them.?

Fried also credits neighborhood leaders and bicyclists with mobilizing grassroots support for bike lanes, both on the web and at public meetings. ?In the end, politicians need to see that bike lanes are a win for them.? 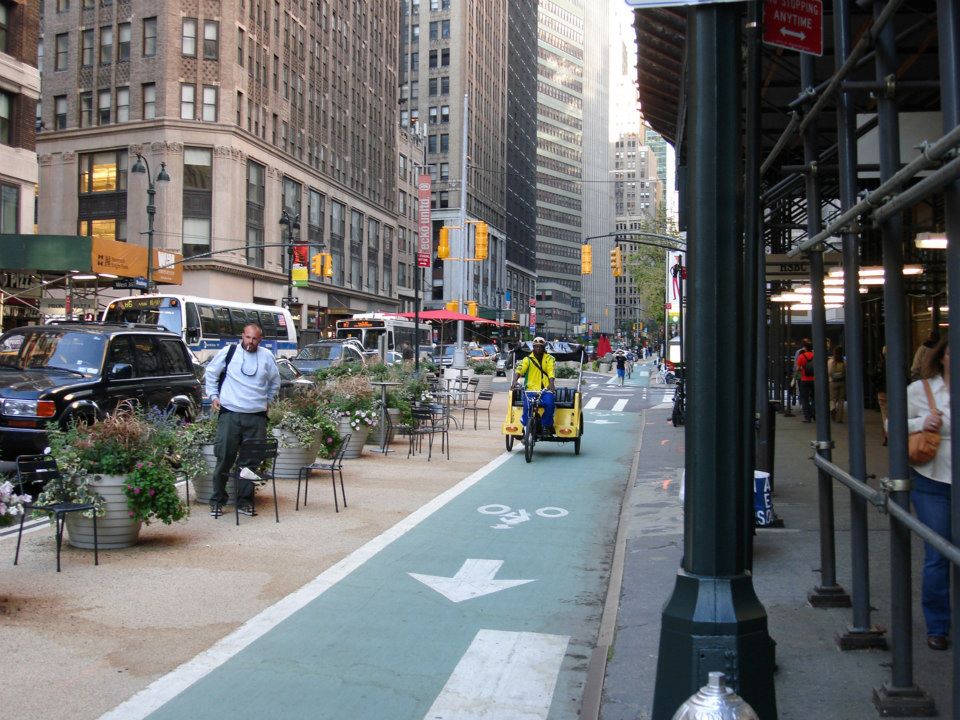 Pressure for new biking facilities came also from business leaders who see better biking conditions as an asset for their companies. High-tech executives at 33 firms?including Foursquare, Meetup and Tumblr?urged Bloomberg to implement the bikeshare system ?as a way to attract and retain the investment and talent for New York City to remain competitive.?  The Hearst Corporation recently announced it will pay employees? cost to join the Citi Bikes program. ?It’s a cool New York thing to do and good for fitness,? says Hearst spokesperson Lisa Bagley.  ?Our decision is driven by what our employees are interested in.?

Tim Blumenthal, president of PeopleForBikes and the sister Green Lane Project, stresses, ?Bike issues need to be framed in the context of what they mean to the city, not just what they mean to people who bike. In New York City, for example, more green lanes, better bikeway networks, and the new CitiBike system will benefit all residents and visitors by reducing traffic, noise and air pollution–making city life a little less frenetic for everyone.?

This all represents good news for cities coast-to-coast. ?If you can do it here, you can do it anywhere,? says White paraphrasing the old song ?New York, New York.?

Other communities will no doubt face their own version of bikelash, but the high-profile debate in New York over bike lanes highlights two key assets of protected green lanes:

New, unfamiliar ideas like green lanes always spark opposition– at first. ?Push back is inevitable,? Fried explains. ?It doesn’t mean the project is flawed. Once it’s built, the constituency for it will grow.?

Complaints about a ?war on cars? have echoed around Seattle from a small but persistent chorus opposed to bike lanes. In response the Cascade Bicycle Club commissioned a poll of Seattle voters (conducted by the independent research firm FM3 using a scientifically rigorous sample of 400 respondents), which found that 79 percent view bicyclists favorably, 73 percent want to see more protected green lanes, 59 percent support ?replacing roads and some on-street parking? to build green lanes,? while only 31 percent believe Seattle is ?waging a war on cars.?

(Green lanes in Washington, D.C. have also been denounced as a ?war on cars?, even though only one percent of DC’s roads are dedicated to bicyclists, according to computations by Washington City Paper reporter Aaron Wiener.)

In Chicago, there’s no organized opposition to Mayor Rahm Emanuel’s vision of boosting the city’s economy by providing 100 miles of green lanes and 550 more of on-street bike lanes. More than 16 miles of green lanes were built in 2012. One project on the South Side, however, did raise aesthetic concerns about historic Martin Luther King Drive, which was solved by shifting the protected green lane to a parallel street and adding buffered bike lanes (wide swaths of paint) to King Drive. The community engagement process around this issue resulted in neighbors forming the Bronzeville Bicycling Initiative to encourage more people to bike in this historically African-American community.

However Chicago Tribune columnist John Kass rouses emotions with his warnings that the mayor’s plans ?foreshadow the day that cars will be illegal.? He also targets ?little bike people? as ?free riders? who don’t pay to keep up the roads and as scofflaws who defy traffic laws.

Ron Burke of the Active Transportation Alliance sees ?little bike people? as a compliment, noting ?how little space we take up on the roadway, how little wear and tear we cause, and how little our facilities cost within the grand scheme of transportation spending.?

Burke agrees with Kass that bicyclists endangering other people should be ticketed, but deconstructs his claim that motorists pay their own way on the streets. Between 24 and 38 percent of total road costs in Illinois are not covered by user fees such as gas taxes and vehicle stickers, even when you count federal funding as user fees, Burke explains, citing a study from the Environmental Law & Policy Center.

Kass is one of a number of commentators across the country who regularly target bikes and bicyclists. After New York Daily News columnist Denis Hamill wrote, ?I hate bike lanes?they are steering some people like me to road rage? one reader responded ?All I hear is an old man yelling, ?Get Off My Lawn.??