Arlington County, VA — just across the Potomac from Washington, DC — is quietly emerging as a leader in the innovative use of technology to create a more bicycle friendly community. Arlington was quick to recognize the value of bike sharing and was thus a leader in the effort to bring Capital Bikeshare, the country’s largest bike sharing system, to the Washington, DC area.  But, it’s the adoption of a less visible technological innovation that has made them a technological leader.

Based on the theory that “what gets counted, counts,” Arlington County, VA has built a bicycle counter and data collection system unlike any other in the United States.  A few years ago, county staff realized they only had a vague idea of how many people were utilizing the county’s on and off road bicycle network, so they began looking for a more organized and thorough way to count people on bikes and on foot.

Arlington started with organized volunteer counts in conjunction with the National Bicycle and Pedestrian Documentation Project; but the usefulness of the data was limited by weather variations and the accuracy of volunteer. It also required a significant investment of resources to coordinate. So, in October 2009 after product research and feasibility trials by David Patton, one of the county’s Bicycle and Pedestrian Planners, the County installed its first permanent counter along the popular Custis Trail, a major bike commuter route that parallels I-66 and the region’s busiest subway line.  The counter was a French device, made specifically for counting bicyclists and pedestrians.This wasn’t just the first counter in Arlington, it was the first permanent combined bicycle and pedestrian counter installed in the United States. Using this counter Arlington transportation staff quickly determined regular patterns of commuter use on weekdays and a different, recreation-oriented pattern on the weekends. In the following months and years, the system was expanded 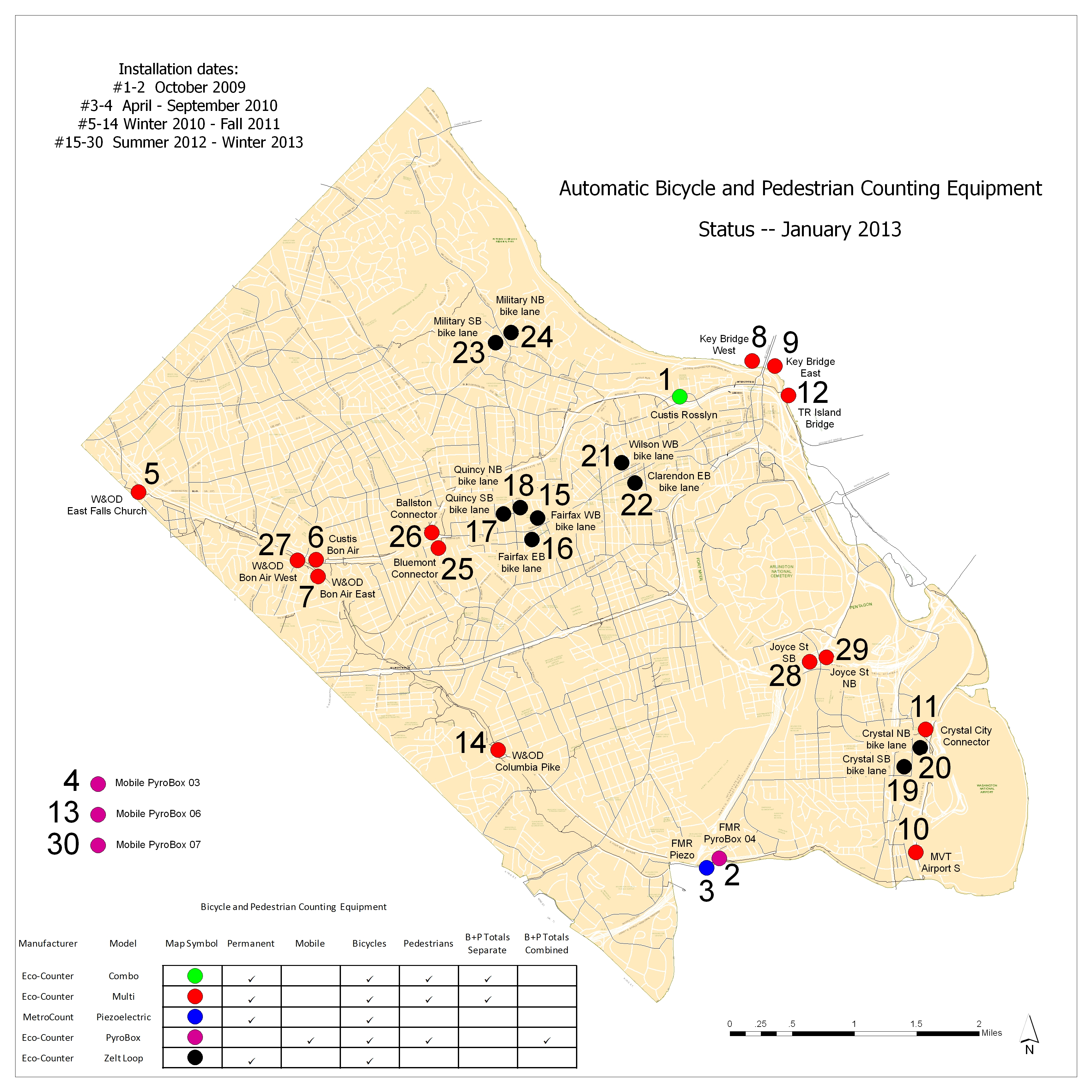 After steady implementation of the automatic counter program, Arlington now has more automatic trail and bike lane counters — 28 in total – than many states. Their bicycle-only piezo counter was the first of its type in this country. Counters are located on each of the county’s major trails, at one of the five main bridges to Washington and in ten county bike lanes.  Not only do these counters count users, but some also detect the direction and speed of travel, and distinguish between pedestrians and cyclists.  County officials and decision makers now have a robust and growing understanding of how many people bike on county facilities, when they do so and how weather and other external factors change behavior. (For example, there was a spike of pedestrian travel over the Key Bridge after the August 2011, earthquake, when Metro was closed for several hours). This data helps directs policy and funding, and supports the county’s effort to make cycling a viable transportation option for everyone interested.

The results of the counting program have changed the view of bicycling and bicycle facilities in the county.

Results show that some trails, the original green lanes, have a regular transportation pattern on weekdays, and the most popular trails support more trips per day than most of Arlington’s local streets. The Custis Trail counter at Rosslyn, for example, has counted over 1.16 million bicycle trips since 2009. This finding of regular and substantial transportation use, Patton notes, supports the argument that these trails deserve a “non-trivial share of snow clearing, re-paving, and other maintenance budgets.”

Thanks to the counters, planers learned the impact that weather has on riding when they combined the counts with weather data. Unsurprisingly, winter weather and rain do cause a significant drop in use (as much as 75% lower), and in the days following a heavy snow fall, trails can be effectively closed for an extended period if they aren’t cleared. After the Snowmageddon storm left several feet of uncleared snow on the Custis trail, bicycle use fell from several hundred winter bike commuters a day to zero for two weeks. However, there is no similar drop in trail use due to warm weather. In fact the warmest months are also the busiest.

County staff can now see how large a factor bike commuting is in the county and how fast it is increasing. Over multiple locations they have seen an average 11% increase in year over year use. This kind of fact-based success story can be very “useful in public relations, inter-departmental, and inter-bureau discussions. For example, knowing that the trail network is used for hundreds of thousands of transportation trips monthly helps justify ongoing investment in a comprehensive system of wayfinding signs for cyclists and pedestrians” Patton says.

And it’s not just useful to county staff. The county’s most popular trail, the Mount Vernon Trail, is operated by the National Park Service (NPS). Arlington was allowed access to Park land to install counters, and in return shares the collected data. The findings have since been used to support NPS’s long-range management of the Mount Vernon Trail as a significant transportation facility, leading NPS to make trail improvements like widening the trail, improving trouble spots, increasing directional and advisory signage, and investigating strategies to protect bike commuters from road glare. 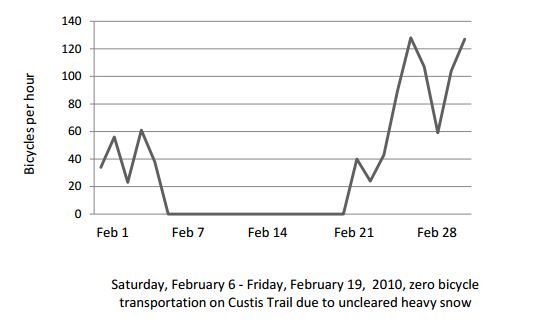 The data not only helps to sell cycling, it helps to improve it. Now that park and transportation staff know the peak trail use times, they can schedule trail maintenance around those times.  The county can determine how trail maintenance, new bike lanes  and other changes modify bike commuting and recreation.  “Now, with as many devices as we have, we can inform many studies, planning efforts, grant applications, and safety investigations — with actual numbers” says Patton.

The bicycle count program is funded with revenue from the County’s vehicle registration fee (commonly known as the decal fee) program which was created to fund a variety of transportation programs such as streetscape improvement, bike sharing and technology investments such as bicycle and pedestrian counters.

All of the results from the counters are completely accessible to the public through BikeArlington.com. This is part of the movement toward open government data, and will hopefully lead to improved analysis and mapping through crowdsourcing. The data is available to third parties interesting in creating mobile applications.

With Arlington on the verge of creating its first green lane — a separated cycle-track along 3300 feet of Army Navy Drive — it is not idle speculation to think that it could become the nation’s first green lane with an automatic counter.  And the data from such a counter could show what the impact of separated bike facilities can be in a clear and incontrovertible way.