And the #1 bike rack city in our nationwide challenge is?

Can you name this street?

It’s the start of a new month, and that means it’s time for the second installment of our eight-month search for the nation’s capital of the casual activity we call everyday biking.

For those of you just joining us: last month, Memphis beat Tucson in a squeaker for the title of the #1 city for cargo biking.

This month, the contest was in a number a little harder to game: bikes with racks, baskets or buckets. However, to celebrate spring we also threw in a wild card: each bike carrying flowers counted as 1.5 bikes.

What happened? Here’s how it went down.

We eagerly awaited this month’s dispatch from Memphis, of course, and it was one of the first to come in. (Thanks, y’all.) And indeed, the flowers did come into play.

“A business on the upstream side of our count location was handing out flowers to riders so I think our 30/37 of baskets with flowers is inflated due to that activity,” city bikeway/pedestrian program manager Kyle Wagenschutz wrote innocently in his summary of Memphis’s count: 37 racks, baskets or buckets, 30 of them with flowers; and 48 other bikes.

It was a great time, and with the 50 percent bonus for the bikes with flowers, Memphis had an effective total of 52 bikes that qualified. But what about the Bluff City’s rivals in Tucson? 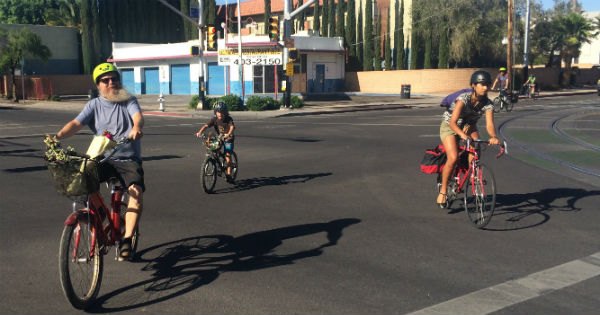 Tucson, it turned out, was learning from Memphis’s tricks.

“Whole Foods donated 10 bouquets to our event so we had a ‘flower fairy’ just down the street who handed those out as people were approaching the intersection,” says Evren Sonmez of Tucson’s Living Streets Alliance. “But we had some additional folks who came with their own flowers, including a water lily in a jar!”

Tucson and Memphis were the two cities that seized the flower advantage, which gave them a leg up against two other formidable opponents in this month’s contest: Cities who could crush competitors through sheer force of their bike-friendliness.

Fortunately for the others, Portland was held back this month by a miscommunication.

“We kinda screwed up,” Bicycle Transportation Alliance outreach manager Carl Larson confessed. “Our counter counted from 4:15 – 5:15 and things tend to pick up a LOT after 5.”

Even with that earlier window, though, Portland’s sheer volume of bikes, most of them outfitted for utilitarian trips, was impressive: 302, 155 of them with a basket or rack and one carrying a flower.

Then there was Chicago, which made a strategic relocation this month to maybe the busiest bike street in the country: Miwaukee Avenue.

Chicago’s Mike Amsden said he could barely keep up with the deluge.

“It was hard enough counting the continuous stream of bikes going by with racks/baskets/buckets, so we don’t have the number with flowers,” Amsden writes.

As usual, we calculated this month’s total by combining two factors, the number of bikes matching our criteria:

And the ratio of bikes matching our criteria:

Then we combined the two using equally weighted curve scores to calculate this month’s winner:

Congrats, Chicago! You soared into the spring and earned the title of the #1 bike rack city in the country this month.

But will the bike lanes of Wicker Park wither in summer’s heat? Will Pittsburgh or Atlanta, which have come into the middle of the pack in April and May, hit their stride? Will Boston follow Chicago’s lead and try its luck at a different location? Will West Hollywood (a new participant this month) find a way to leverage its smaller overall numbers?

And will Tucson, which this time landed behind Memphis by an even slimmer margin (one tenth of one point) turn those tables?

We’ll find out over the course of the next few contests.