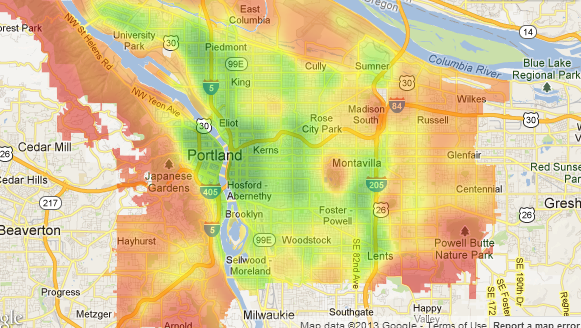 Most “best cities” rankings are the urbanist’s equivalent of a “men are like this, women are like that” standup routine: easy, dull and maddeningly good at catching your attention.

But once in a while, a ranking is actually worth watching. One of those came out this week.

It’s called Bike Score, and here’s what makes it different — especially for those of us who believe in physically separated bike lanes: its data goes all the way down.

For example, here’s a list of Bike Score’s 10 best and worst neighborhoods for biking in each of the Green Lane Project’s six cities. And here’s their methodology, which places green lanes front and center.

Dispute these findings as you want — that’s the fun of rankings, after all — but there’s a secret behind Bike Score’s address-level rigor: unlike most urban rankings, which exist mostly to lure eyeballs, this one is made by a private company, Walk Score, that is dedicated to carving out a commercial niche for itself in the real estate business.

Born six years ago out of a 900-word blog post by the Seattle-based Sightline Institute, Walk Score made its first splash in 2007 by assigning a numerical value (zero to 100) for every street address in the United States based on the variety and proximity of nearby retail shops. As suburban homebuilding collapsed, Walk Score established itself as an imperfect but useful way to capture walkable urbanism, the hottest surviving commodity in the housing business.

Real estate agents across the country have embraced Walk Score for a reason: it helps them make money. A 2009 study concluded that each point of Walk Score correlated to a sale price difference of $700 to $3,000.

The result is a one-of-a-kind web service: one that uses natural market forces in the real estate business to pay for a wealth of street-level data and the rigorous methodology that the urban-rankings business lacks.

One key example: When Bike Score measures the quality of bike lanes near a given location, it gives twice the impact to what it refers to as “off-street” bike routes, which include green lanes separated by plastic posts, planters, jersey barriers or curbs.

Look no further than New York City (ranked No. 9 nationally, according to Bike Score, between Tucson and Chicago) to see Bike Score’s emphasis on protected lanes in action. The heart of NYC is nice and flat:

it has lots of destinations worth patronizing, except along the shorelines:

it has almost no bike commuters, as a share of the population (for comparison, check out the corresponding Portland map):

but its bike lane networks, especially the heavily weighted separated ones, are highly concentrated: 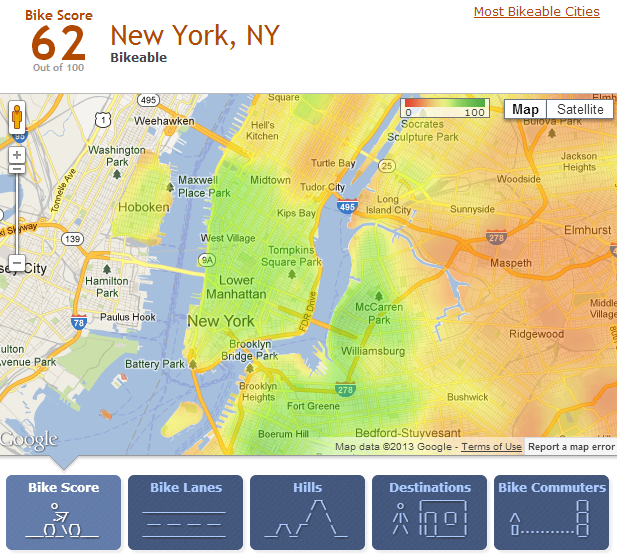 Street-level data like this isn’t actually that useful in comparing cities to one another, even though that’s more interesting. But as Bike Score keeps working, it’s going to be terrific at tracking cities over time. Which is exactly what Walk Score as a company wants to start offering soon: a commercial product that cities can buy to track the outcomes of their urban planning. 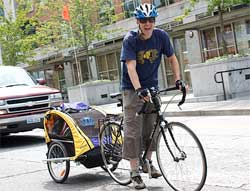 “We’re working with a couple cities right now,” Lerner said. “We’re excited to make this a more real-time version of the studies that people do that are static.”

Designing Bike Score has had some complications. For example, Portland’s excellent neighborhood greenways count as no better than a painted lane along a highway.

“We initially wanted to give some preference to bike-friendly streets or residential bikeways,” Lerner said. But “we would see cities that would basically give us this huge network of bike-friendly streets, and what we meant was that they would have this sign maybe every five blocks.”

Lerner said that the current incarnation of Bike Score compromises by giving credit — though not double credit — to “a residential street with sharrows and some type of traffic calming and signage.”

Then there’s the issue of bike lanes along one-way streets. Is that a bike lane, or half a bike lane? Bike Score handles this by ignoring any bike lane that’s particularly close to another parallel one.

Bike Score may keep evolving. Its source data isn’t transparently dated yet, for example, and scores don’t reflect the recent explosion of bikesharing. But for people assessing the spread of quality bike infrastructure, it’s poised to become an important tool.

Other “Best Bike Cities” rankings, such as Bicycling Magazine’s qualitative assessment and the League of American Bicyclists’ Census-based ranking, reflect the judgment and behavior of people who currently ride bikes for transportation. And that’s hugely important.

But only Bike Score’s ranking takes a hard look at factors that appeal to people who don’t yet ride bikes much — and soon will.