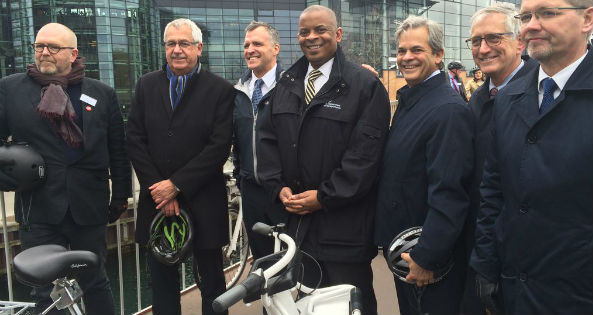 Tuesday is a big day in the U.S. presidential election – among other things, a make-or-break moment for a fellow named Bernie who calls himself a democratic socialist and says Denmark is a country worth emulating.

And though there’s debate about whether Denmark is actually a socialist country (some say it’s simply a capitalist country with an unusually well-funded and effective government) here’s one thing it definitely is: bike-friendly.

So it’s been a joy to follow along this week as U.S. Secretary of Transportation Anthony Foxx (who has, for the record, endorsed Hillary Clinton) immerses himself in how well Denmark’s streets work.

You don’t need a translator to decode the headline from this morning’s edition of the center-right national daily newspaper Berlingske:

Here are the first few paragraphs, in English:

The bicycle bridge is an excellent example of the just the kind of thing that Foxx is trying to promote in the US: Better connectivity between one part of town and another, as well as increased safety for pedestrians and cyclists alike.

Therefore he, together with the mayors of Austin, Portland and South Bend, is visiting Copenhagen this week in order to seek inspiration regarding better foot and pedal-powered infrastructure.

?Denmark is world famous for integrating cyclists and pedestrians in urban traffic environments and Danish bicycle culture is fantastic. Your faith in that and use of it means that bicycles are an integrated part of your transport system. I am fascinated to see how bicycle culture has really taken hold of the Danes,? Anthony Foxx told Berlingske.

The driving force behind the visit is to create an America where its citizens choose two wheels rather than four, so traffic jams are reduced, increased mobility is achieved and its citizens become healthier.

?In the U.S., we have a lot of cities that are growing quickly across the country, and they are facing great challenges regarding mobility which leads to longer travel times. We are looking for solutions that make it possible to use existing infrastructure more effectively and you have some really good examples of how to do that,? Foxx commented.

This intuitive understanding of how well a city works when it builds connected networks of low-stress bikeways is exactly why sending government and community leaders on study tours to Copenhagen and other model cities can be so effective.

As we’ve written before: The best part of a bike-friendly city isn’t the bikes. It’s the city.

Denmark is far from a perfect country, but it is a very prosperous one. It is one of the world’s best at giving poor children an even chance to become middle-class or rich adults. And it is, literally, the happiest.

Denmark has been doing a lot of things right. It’s always inspiring to see U.S. leaders looking abroad to learn from the best — and Danish bicycle culture is, after all, fantastic.