Because protected bike lanes can make it comfortable for almost anyone in a city to ride a bike to a good transit station, they’re perfect complements to public transit.

And as various cities have found, transit projects that remake streets can be the perfect time to add a protected bike lane, too.

That’s why we’re excited about the new guide for transit-oriented streets that’s due this spring from the National Association of City Transportation Officials. NACTO’s latest design guide draws on examples here in North America to show how streets can fit walking, biking, driving and efficient mass transit all in harmony.

For example, here’s an annotated illustration of a conventional bike lane that bends out around a bus stop, to avoid any conflict between bikes and buses:

Here’s how it might work with a parking-protected bike lane:

And here’s an illustration showing that a contraflow bus lane on a “one-way” street can also make a pretty good barrier for a bidirectional protected bike lane: 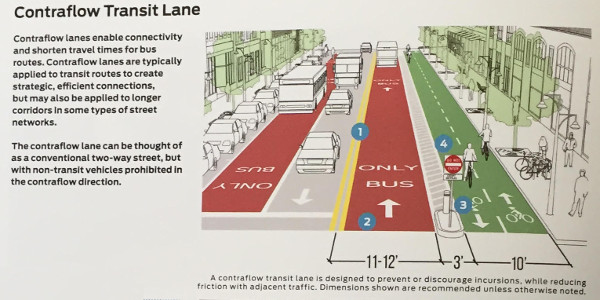 All of this is a huge shift from the way things have been in the United States for years, with buses and bikes both shoved, together, into spaces that cars couldn’t use.

But as many U.S. cities have realized, devoting more and more street space to the least space-efficient way of getting around is just not a very effective way to build a city.

We should be divvying the resources of our cities, including our public road space, among ourselves, not among our machines. Guides like NACTO’s are associated with bikes and transit, but they’re actually instruction manuals for the proper use of cars as tools. NACTO shows us how to make sure that our machines are our servants, not our masters.