A man in a van (with some bikes) 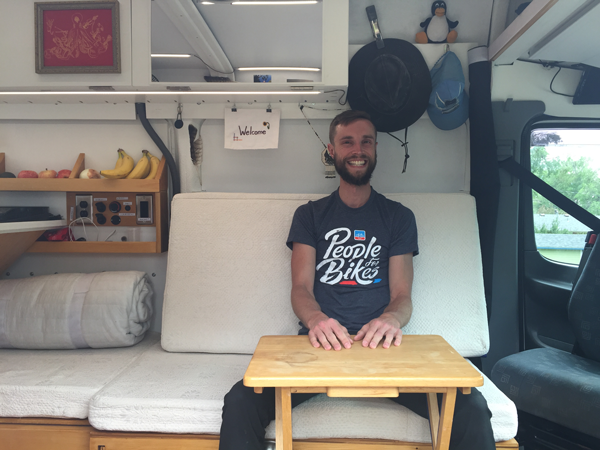 In 2014, Sean Madsen was living in Boston and working as the information technology manager at Bikes Not Bombs. That’s when he decided it was time for a change. “I wanted to go into the unknown,” he says. “My life had been so known for so long. So fixed and predictable.”

After a ton of research, Madsen zeroed in on a plan: He wanted to travel around the United States with his bikes. He looked into many vehicle options including converting an old ambulance or a work truck, but settled on purchasing a Sprinter Van.

Then came the work of converting it into something he could both drive and live in. Originally slated as a nine-month project, the conversion ended up taking him 18 months. The van is now equipped with a fold out bed, a sink, fresh water and grey water, a fridge and microwave, a composting toilet, solar power and batteries, and storage. 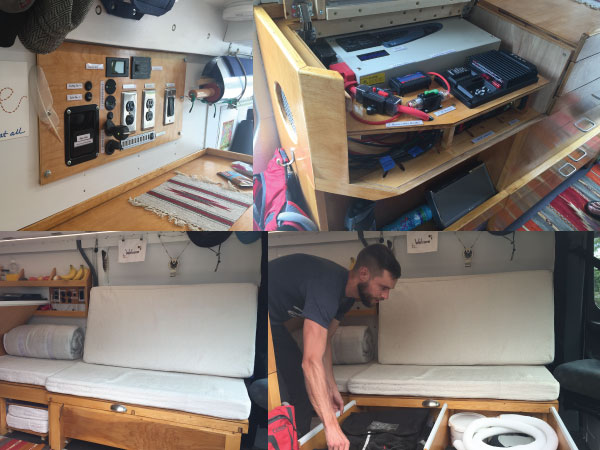 Solar power and storage are just a few of the features that make the van a great place to live.

Now that his van is ready to roll, Madsen can get down to business. He’s already explored Northern New Mexico and Southern Colorado, and has plans to visit Asheville, North Carolina, the Pacific Northwest, Northern California, Arizona and Utah. He hopes to travel for the next year and a half.

Wherever he goes, Madsen plans to explore and adventure on his bikes. When he started the project he owned eight bicycles, including a tandem, a unicycle and a snow bike. He cut that total to two: a mountain bike for cross country riding and a cyclocross bike for road riding, racing and trips around town. 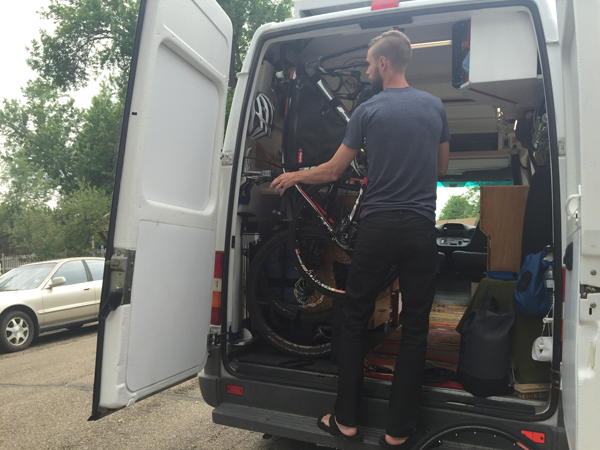 In just a few steps, two bikes are stored and secured inside the van.

Madsen also spent a good deal of time setting up the best storage for his bikes inside the van. “I started out by trying different ways of fitting them together to make the smallest shape,” he explains. “What worked best was both bikes resting on rear wheels, front wheels off, bikes pointing in different directions and handlebars turned in toward each other.” Both bikes together measure 18 inches wide and are locked to the van with a cable that is ingeniously threaded through, and locked to, the body of the vehicle itself.

Madsen hopes to ride up Mt. Evans in Colorado and hit the the Kokopelli trail between Colorado and Utah. But he actually has very few specific plans. “I want to explore and meet other people and see what they recommend I do.” This worked well in New Mexico. “I was biking in Albuquerque and I asked the riders on the trail where I should go,” he says. “They recommended I go to Santa Fe for a bike and brew festival. It was easy to just pick up and change directions.”

What started as a dream is now a reality and Madsen couldn’t be more pleased with how his van, and new life plan, turned out. He knows it’s not for everyone, but so far the nomadic lifestyle is suiting him perfectly. As he puts it, “I needed to take everything and throw it up in the air and see which way the wind blew it.”