A big day for bicycling in New York City 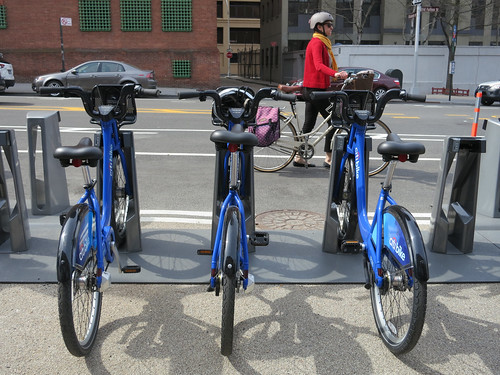 This won?t be an average Memorial Day weekend in New York City. That’s because Citi Bike, the largest bike-sharing system in North America, will make its public debut on Monday.

Many New Yorkers are thrilled about the prospect of 6,000 new bicycles becoming available for economical short trips. Surveys conclude that most residents are at least somewhat optimistic about the new offering (which will launch with 330 locations and a $95 annual membership that allow unlimited free rides of 45 minutes or less). 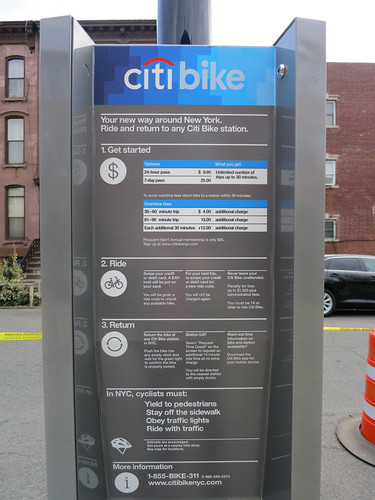 Some New Yorkers have expressed letter-to-the-editor concerns about pedestrian and rider safety, compatibility of the automated rental kiosks with neighborhood architecture, station locations, as well as a variety of other issues that most people couldn?t possibly imagine.

To say that media coverage in advance of the system’s debut has been extensive would be the understatement of the year. Depending on your perspective, the somewhat widespread panic associated with the Citi Bike launch is troubling, entertaining or expected. 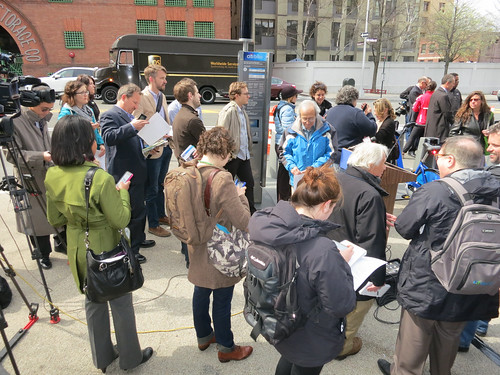 Bike access during Citi Bike’s first week will be limited to the 11,000+ people who have already purchased annual memberships. On June 2, the system will become available to everyone. Even with that small slice of opening-day eligibility, day one (under sunny skies and temperatures around 70) may support several thousand new, short-term rental bike rides. 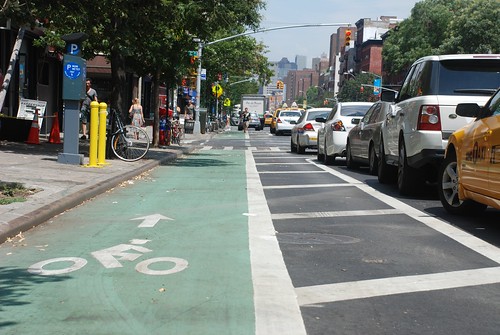 New York City has steadily expanded their network of bike facilities, such as this green lane on First Avenue. These next-generation facilities should improve the riding experience for all Citi Bike riders. (Image: Flickr user Joe Shlabotnik)

Here are a few more predictions:

1. The Citi Bike system will be heavily used from day one by both residents and visitors. The daily numbers will blow away those of all other North American bike-sharing systems (even after factoring differences in city size and number-of-bikes-available-per-capita).

2. Complaints and war stories will be frequent and loud at first, but will steadily dissipate. Given the size of the system, number of daily rides, and density of New York City, collisions and accidents will occur daily. All traffic injuries and deaths are unacceptable, but in the nation’s largest city, they are inevitable.

3. Traffic counts on some New York streets will decrease, but not by much. (In Washington, D.C., a bike-sharing study concluded that the biggest change is not in car use, but that people bike instead of taking the bus or subway. All who do will save money. In D.C., they’re saving an average of about $15 per month, even after paying for an annual bike-share membership.)

4. The system will expand quickly. Major NYC corporations will pay to put Citi Bike kiosks in front of their offices, and will trumpet the convenient offering as they work to attract the best and the brightest. Neighborhoods that originally said, ?not in my back yard,? will quickly and generally change their tunes.

5. The diversity of users?by age, gender, background and bicycling experience?will be impressive.

6. NYC air-quality will improve. Traffic will thin, though not by a lot. The city will become quieter, but will still be noisy in most places at certain hours.

7. New York will become a more appealing city for just about everyone. 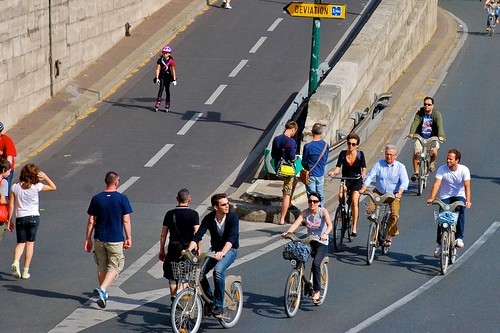 In Paris (pictured) and many cities worldwide, bike-sharing has become an essential part of the public transportation system. (Image: Flickr user Dsade)

We can make these projections with confidence because this is what has occurred in nearly every big city worldwide that has launched a bike-sharing system.

Yes, New York City may be bigger, busier and more contentious that most. But as we always say at PeopleForBikes, when people ride bikes, great things happen. And when more people bike in New York, the city and its people will benefit?a lot.

Tim Blumenthal is the president of PeopleForBikes. Blumenthal began his cycling work as a journalist, serving as an editor for VeloNews, Mountain Bike Magazine, and Bicycling Magazine.