It was a perfect spot for a coffee shop in Portland’s reawakening inner-eastside warehouse district: a big square building whose offices held 150 creative workers and students.

But Mike Lettunich, the converted warehouse’s developer, wanted people to really notice his newest retail tenant — to make it a neighborhood destination. So he spent $2600 to replace two auto parking spaces out front with six bike racks.

“I think it’s going to be good for making sure that Courtney’s business does well,” said Lettunich (at right).

Not every city is Portland, where 13 percent of central-city trips happen on bikes. But as cities around the country race to imitate and surpass the bike lane networks of cities like Portland, they should also be paying attention to a less famous local innovation: on-street bike parking. 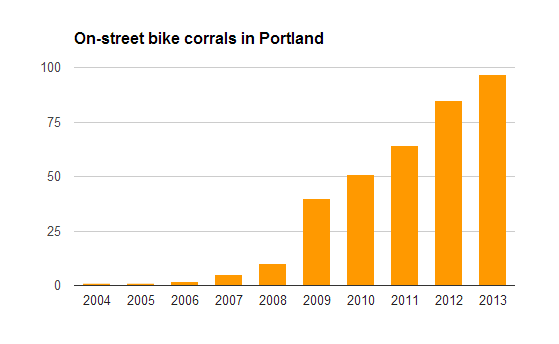 Portland now has 97 so-called “bike corrals,” which typically remove one auto parking space for every six to eight bike spaces. One-third of those corrals are new in the last two years — and, crucially, every one of them was installed with the request or approval of nearby businesses.

Some stores essentially install bike corrals on their own property. For example, Portland’s newest grocery store will have only 57 auto parking spaces — but 60 bike parking spaces.

Does great bike parking increase bike usage? Probably not on its own.

“There are few rigorous studies of the impacts of bike parking on cycling levels,” a 2011 Rutgers study concluded.

But (to paraphrase parking scholar Donald Shoup) bike parking operates as a fertility drug for bikes, helping a city make the most of its investments in green lanes and other bikeways.

And the most important factor in Portland’s on-street bike parking boom is that it’s been driven by retailers.

Even as Portland retailers snap up storefronts along high-traffic bikeways to snag a share of bike riders’ spending power, many say nearby bike parking is the real key to attracting the attention of potential patrons on bikes.

“Even if they’re not coming to us, they’ll walk right past us, and that’s super helpful,” said David Welch of North Portland restaurant Lincoln.

Gila Lane, who owns and operates a new 1,000-square-foot art gallery on the Clinton Street neighborhood greenway, said she had an idea for the city’s next bike parking space.

“Right over here would be a good place,” Lane said. “Right outside my door.”

Lettunich, owner of the building that houses the new coffee shop Din Din, said its corral will function like on-street signage, communicating even to people in cars that this is destination worth checking out — and keeping lines of sight in and out of Din Din’s windows.

“It actually does good for visibility for people who are driving by on the street, walking by,” Lettunich said. “There isn’t an SUV parked in front of her facade.” 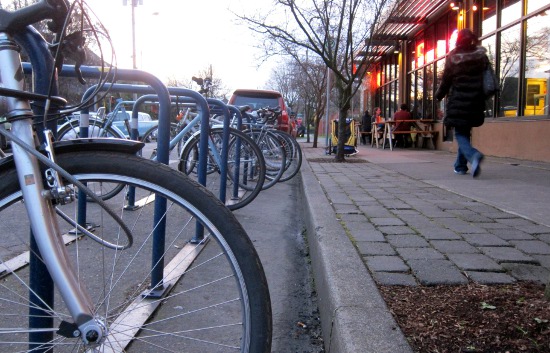 When city transportation staffer Greg Raisman improvised the first design for a bike corral in 2004, it wasn’t so much to help bicyclists as to help pedestrians.

After five years of rapid growth in biking, the corner of North Mississippi Avenue and Shaver was overflowing with parked bicycles.

“I’d go by there and there was all these bikes everywhere, so I just started to put in bike racks on the sidewalk,” Raisman said. “It was also really a problem for cafe tables and pedestrians, especially if you’re a blind pedestrian. — It became evident that it would be good to take the bikes off the sidewalk and put them on the street.”

Because every business patron is at least temporarily a pedestrian, retailers saw the appeal right away.

“Pretty much immediately, about two blocks away, all the businesses said ‘We want another one,'” Raisman recalled. “It did take some time for the city to really figure out how we’re going to manage these. — That was a couple of years, and then after that it really just started going gangbusters.”

Swapping in a bike corral for an auto parking space near a street corner even improves safety for people in cars.

“You can see through them,” Raisman said. “It just opens up that visibility a lot.” 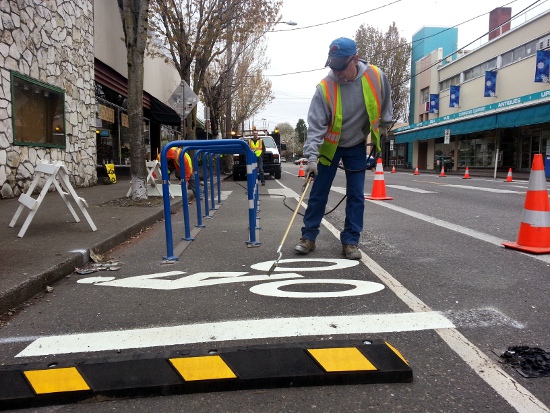 A key lesson from Portland’s experience: the city doesn’t pay for an on-street bike corral unless it’s going to fill up frequently — to “demonstrate success,” as Raisman puts it.

Once a neighborhood is busy enough with bikes to fill a corral occasionally, retailers intuitively understand their benefit: they bring in more customers per square foot of parking space.

But that intuitive understanding by retailers is only made possible by a city government that’s taken the time to perfect the system:

“Bike corrals, I think, are really the result of several dedicated bureaucrats … saying ‘This is something we really want to do and we are going to push to make it happen,’ said Cohen, referring to his colleagues Raisman, Roger Geller and Sarah Figliozzi.

Cohen now handles the city’s bike parking program. It fills about half of his full-time job for the transportation bureau.

“If you tell people enough times, ‘Call this number and you can get a bike rack in front of your business,'” Cohen said, “they finally start to believe you.”