18 of the best slides from the first PlacesForBikes Conference 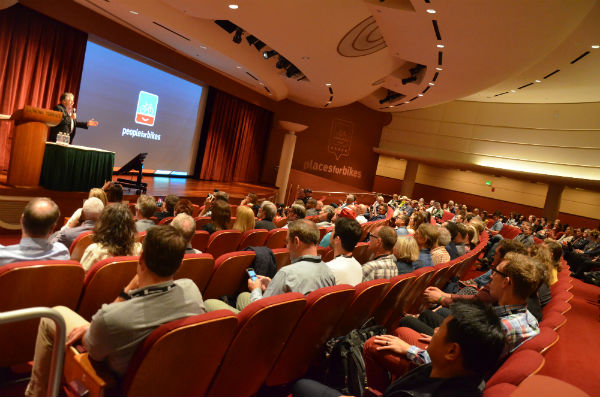 When we were pulling together the inaugural PlacesForBikes conference, held last week in Madison, we had a couple of strategies.

First, we wanted a compact program: two breakout panels, four keynotes, three plenary panels and a round of small-group strategic planning. (Plus a bike ride, of course.) Second, we wanted to cross-pollinate ideas across the biking movement. Instead of having separate tracks for things like equity or the bike industry, we tried to integrate different interests within each panel, since (for example) all policy needs to be equitable and all biking exists in symbiosis with the bike movement.

Hopefully, the result was a dense brew of fresh wisdom. Here’s a sampling of the most interesting, lifted from some of the slideshows presented by conference speakers.

You can also see videos and/or slides from most sessions here.

(I’ve uploaded large images below so you can look closer at any of them. To view these images at a larger size on a desktop, right-click or command click and choose “open image in new tab.” Unfortunately, this also means they may display distorted on some mobile screens.)

An innovative crossing of a major street

Before and after shots from Tessa Greegor of the City of Fort Collins:

Why bike shops should care about bike networks 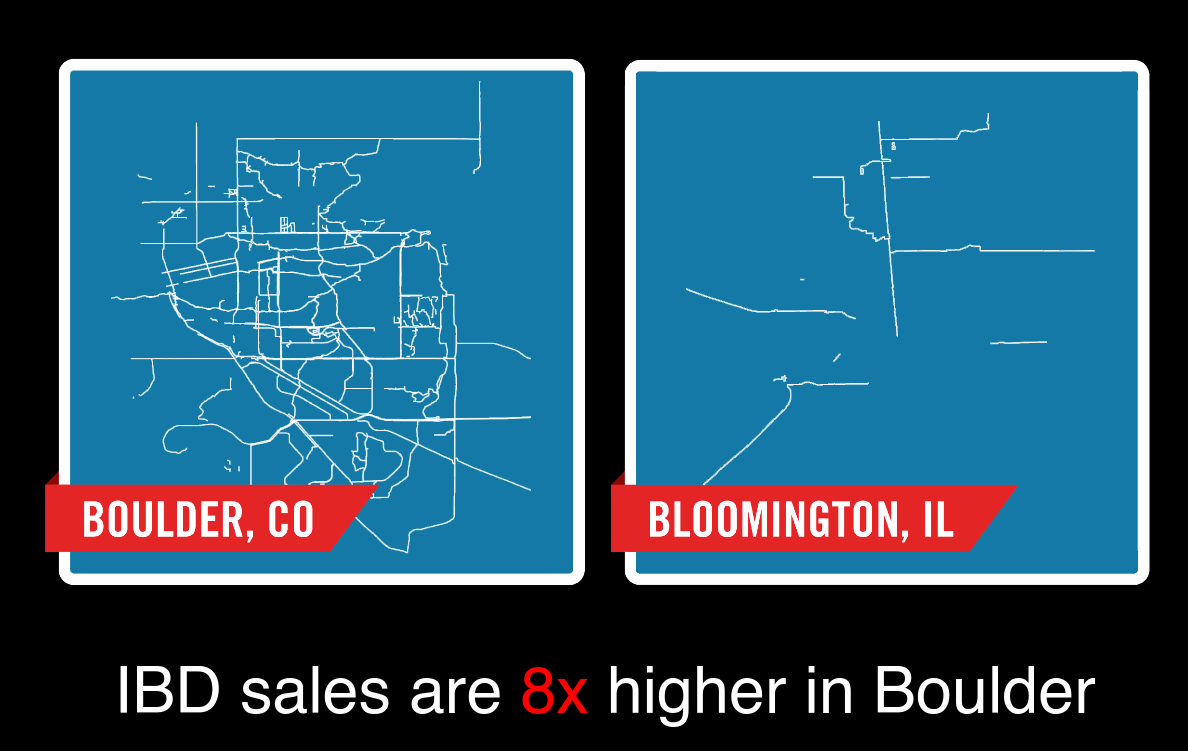 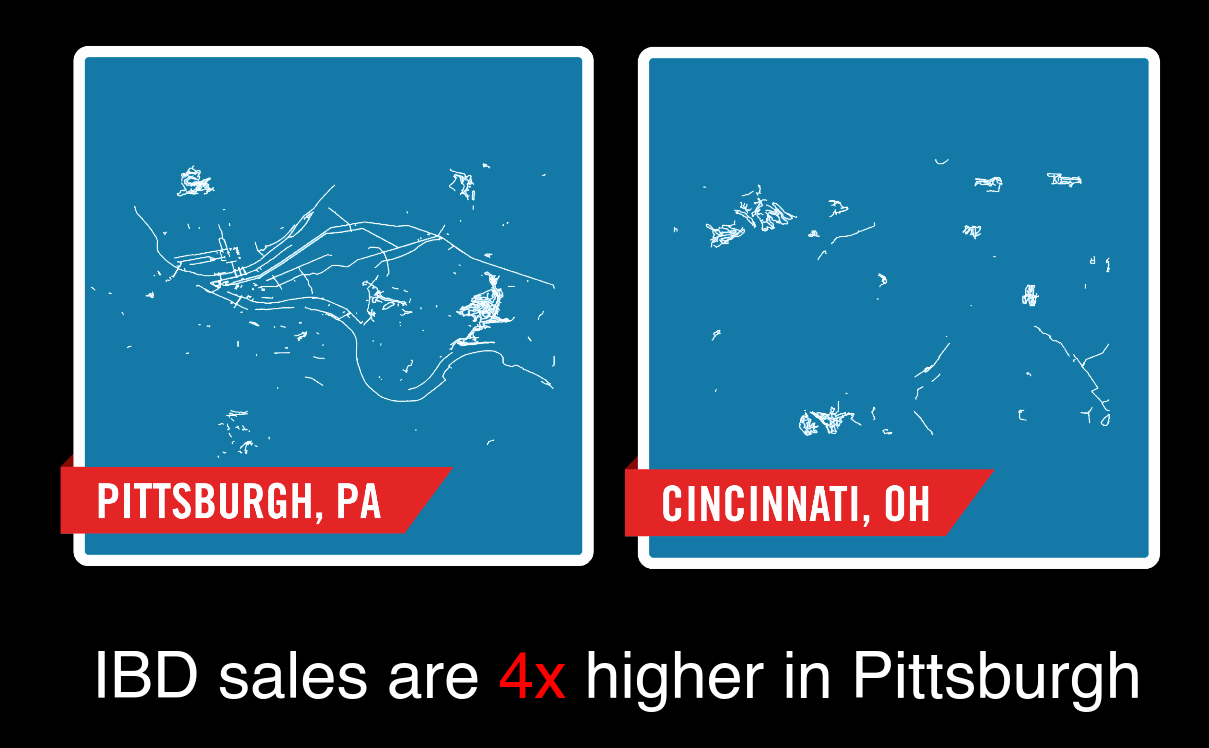 Kate Fillin-Yeh of the National Association of City Transportation Officials pointed out that though many cities have a few protected bike lanes, only a handful are making consistent progress: 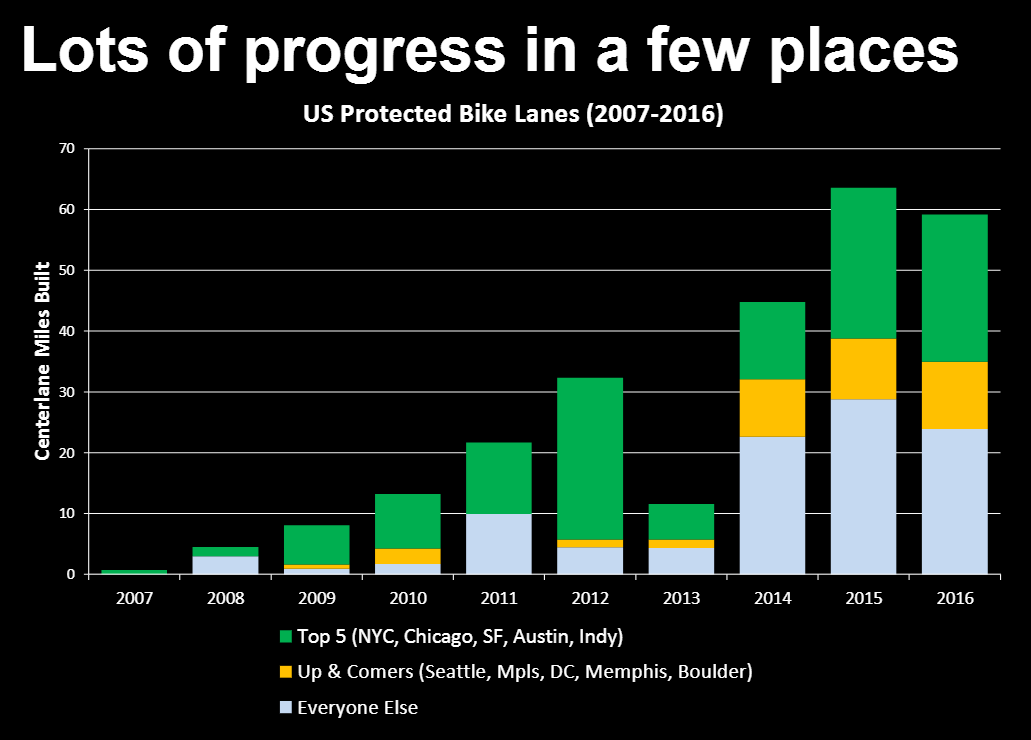 Why networks matter, in one slide

How other countries’ biking networks score

Gardner and Boldry used the new Bike Network Analysis they’ve developed (and calculated for 299 U.S. cities so far) to see how two European cities stack up to U.S. cities. Groningen in the Netherlands, the college town that is the only city known to carry more than 50 percent of trips by bike, scored a 75, compared to 55 for Fort Collins:

And Seville, Spain, which saw biking rocket in popularity after a new protected bike lane network was installed a few years ago: 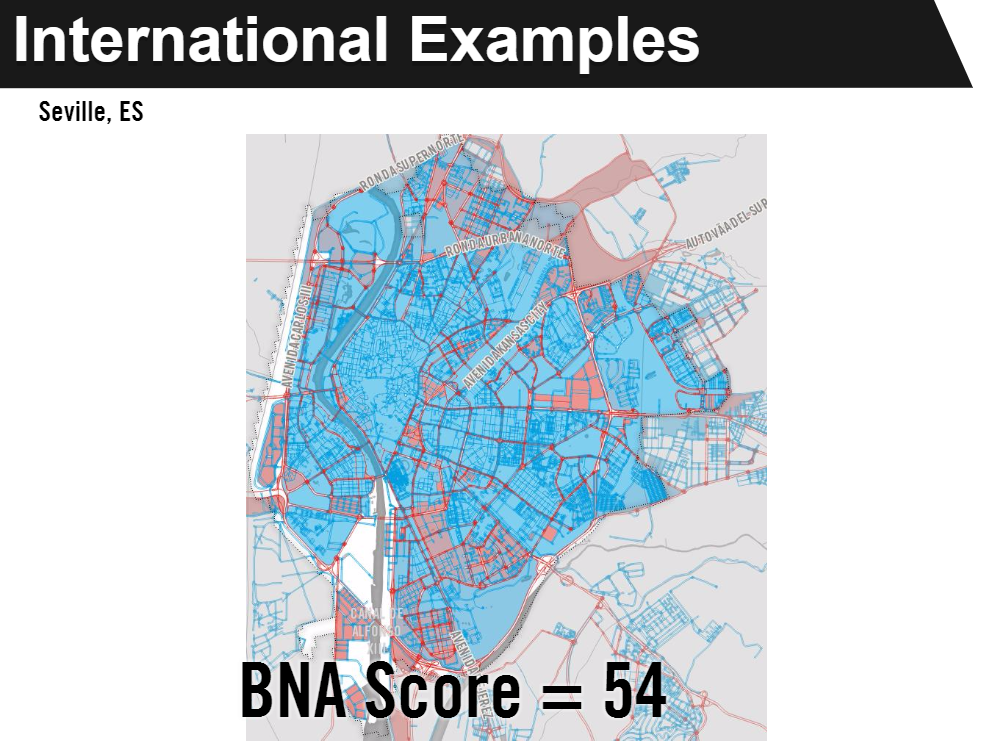 A one-slide explanation of a bike boulevard 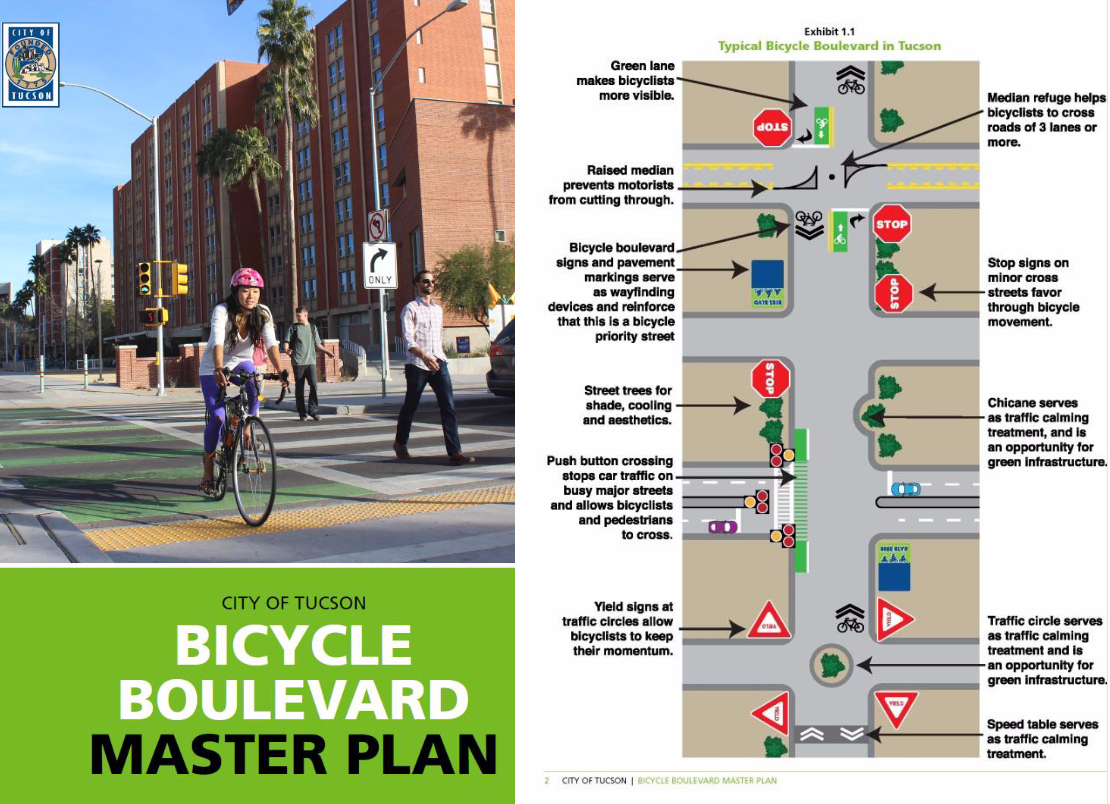 The safety case for bike boulevards 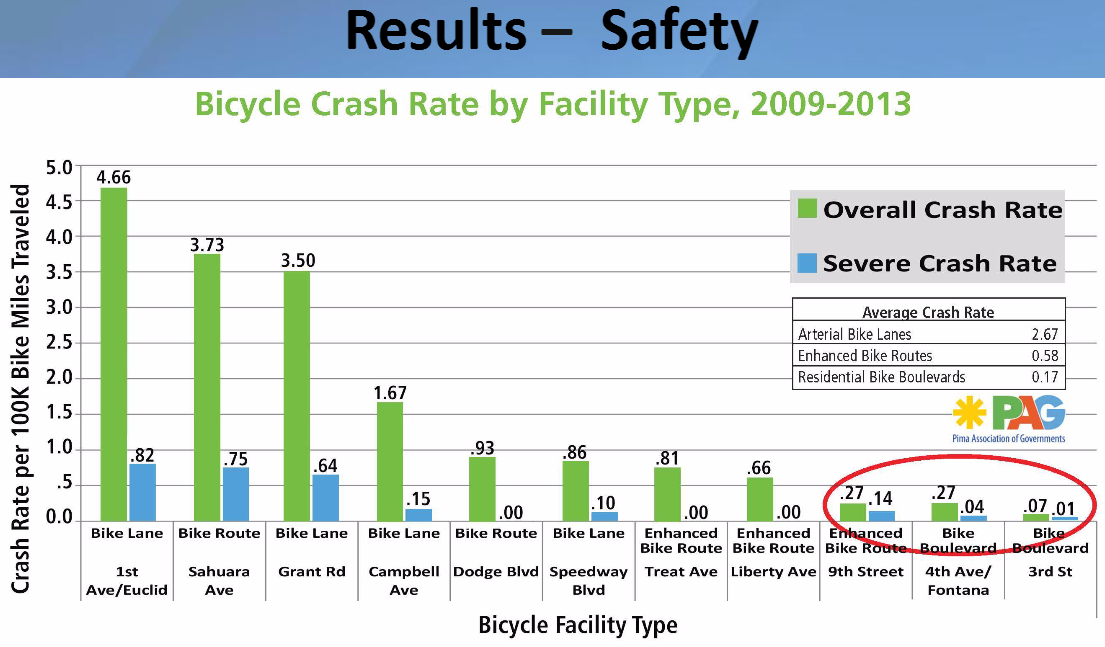 Jennifer Dill of Portland State University presented results from a brand new study that broke down 23 biking barriers by both race and income, revealing interesting differences between high-income and low-income white people and people of color. 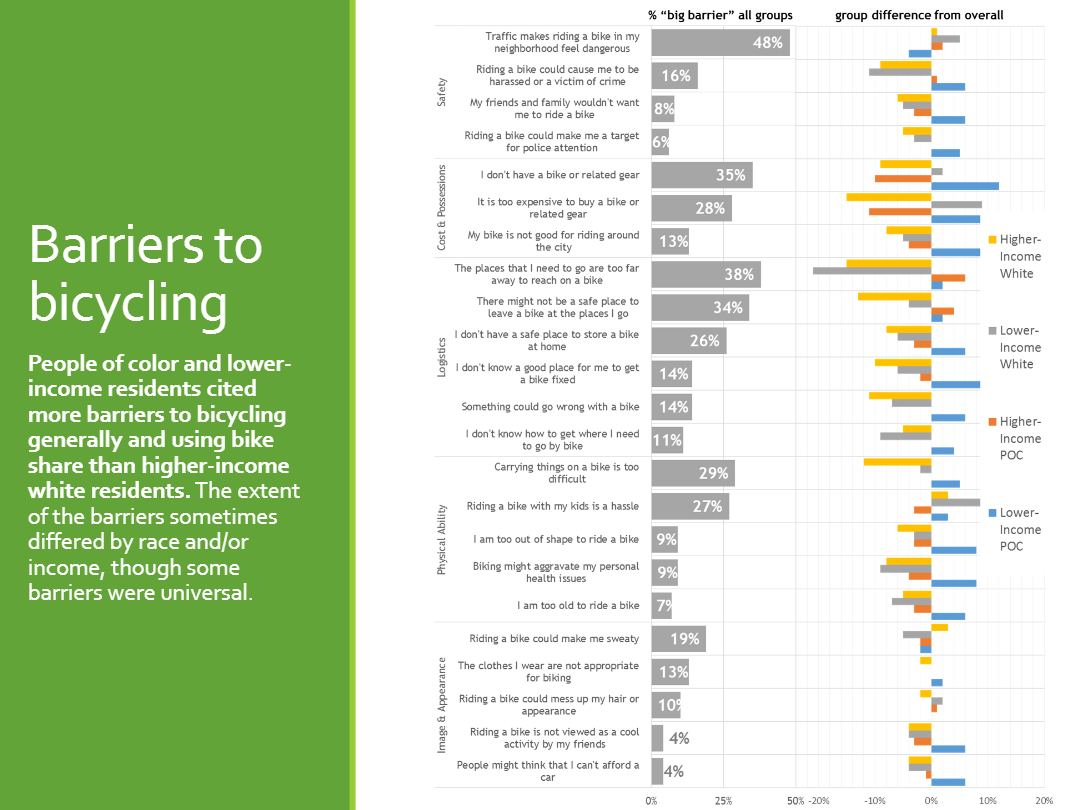 Austin’s Laura Dierenfield joined a panel about “quick projects that make a difference,” sharing (among other projects) this imperfect but functional band-aid for a street that awaits a real sidewalk:

David Smith of the Chicago Department of Transportation shared this three-part sequence about the rapid progress in one of the country’s most consistently improving bike cities:

Austin’s Nathan Wilkes walked participants through the methodology he used to make the case for one of the country’s biggest local investments in biking, including a groundbreaking way of comparing cities to one another independently of municipal boundaries. The same analysis showed how major biking progress in central Austin has been concealed inside Austin’s citywide Census figures:

These were only a taste of the dozens of presentations on offer last week, and of course many of the most interesting insights arrived in live conversation. For a less wonky (but more complete) sense of the conference, here’s a short video summary from documentarian Ryan Van Duzer: